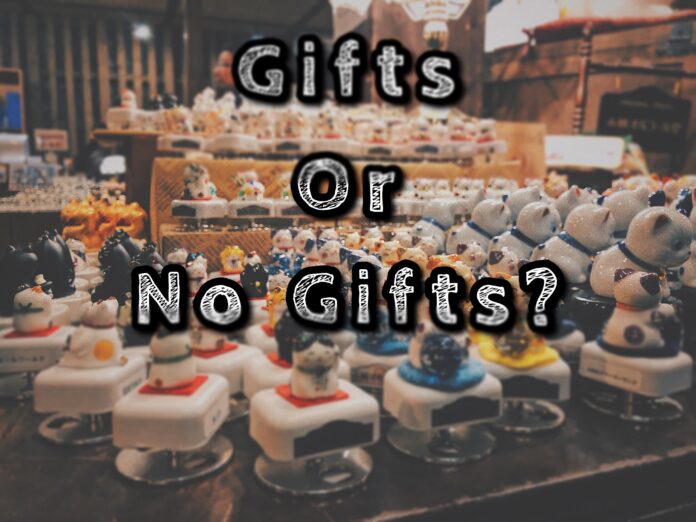 I travel a lot. Each time I go out, there are always people who go “don’t forget my gifts”. People whom I rarely talk to, people whom I sometimes never meet, and people who are not even close to me. I am not saying that they are bad, and I know some of them only said that as a joke. However, things like this tend to get a little irritating when I receive the messages way too often. I wouldn’t call myself an unkind person, but I am not too kind and rich to the point I can always bring back things either. I have to let this out, so here are a few reasons why you should never ask people who travel to get your gifts.

“Don’t forget to get something for me when you come back!” is such a simple sentence to say. However, it is absolutely uncomfortable to respond. To be polite, sometimes I said “I’ll try, but I can’t promise.” They have no idea how uncomfortable it is to receive such requests, especially from people who are not even close to each other. One thing that you should know is that people will only get you gifts when they are close to you. You don’t even have to ask, you will be the person on the list for getting souvenirs.

Why would a person expect to receive souvenirs from another person who is just their acquaintance or barely is their friend? What did you get for them when you traveled? If you got them gifts when you traveled, then that is understandable that you want something back. However, you should never ask for gifts from someone under no circumstances. It low-key shows that you are a little desperate for things, and that is actually rude.

“Where is my gift?” is another extremely uncomfortable question to respond to. I usually get this kind of question every time I come back from my vacations or trips. Why? Why am I always expected to bring back gifts every time I travel even from people who are not even close to me? When I told them I did not get many things back, some even said, “okay don’t forget to give me next time.”

2It Is A Pressure

In what way that getting asked to buy souvenirs is a pressure? Why so dramatic? You might say. Do you have any idea how annoying it is to keep in mind that I have to get souvenirs back so that I won’t upset people? Sometimes it is okay if I travel alone, I can spend all the time I need to look for souvenirs. Sometimes I travel with my friends, and I don’t want them to waste their time waiting or coming with me to get souvenirs.

I don’t like it when some people make me feel like it is an obligation as a good friend to bring back souvenirs. Can’t you be good friends and let me travel with peace in my mind without receiving messages to get you gifts? That is why I don’t read messages when I travel sometimes. Even people who never message me messaged me when I travel.

Becoming friendly all of a sudden, eh? No, thanks. Baiiiiiiiii

*literally facepalmed myself while writing*

I am not saying bringing things is way too expensive to the point that I cannot afford. But I am a frequent traveler, so that is something that I am not really happy with. If people expect me to bring back things from every trip I take, that is a little too much. I remember my first trip to Japan, I spent more than $200; if I’m not wrong, on souvenirs back home. It was my first time traveling abroad, and not all my friends got to travel there so I did not mind.

I bought snacks and other stuff as souvenirs for my bosses, colleagues, and friends. Some of them did not ask for a thing while others did, but it was not a problem. Not until I went on my second, third, fourth, fifth, sixth, seventh, and god-knows-what trips that I cannot stand the messages. There are even people who were upset and mad at me for not getting them things. Like I care, but why would you be mad? Honey, you ruined the friendship that we don’t even have. Jesus Christ.

You know, sometimes I did not even get things for myself or my family. Why acquaintances, why would you want things from me? What have I owed you?

A perfect example was during my recent trip to Japan. An ex-boyfriend of mine from like 12 years ago said “Don’t forget to bring me action figures when you come back.” He said that multiple times although I said no. Do you have any idea how freaking expensive action figures in Japan are? Also, who the heck are you? As a grown and married man, that was such an immature thing to say and ask for. Not nice, not nice at all.

Asking for gifts is something, but asking for expensive gifts? Come on!!!

Be like my dad, people. On each trip I take, my dad always says “Just use your money to travel, don’t bother getting things for me.” Still, I get him a little something anyway; he’s my dad. Duh.

4It Is Time Consuming

I travel as means of leisure, to relax, and to enjoy the landscapes and experiences in different places. If I see a place where I can get good souvenirs for my family or best friends, I get a few things back. The thing is that not souvenirs for my dearest people are right for people who are not close to me. There I said it, I have my priorities when it comes to getting things for people I love. Call me mean, but why should I spend so much on people who are not close to me?

Now that I’ve said it, I think probably it’s myself who knows too many people. Nevertheless, I still think it wouldn’t bother me so much if some people understand that buying gifts is not an obligation. And they should never put pressure on other people like that.

Let me tell you why it is time-consuming. I always have to spend at least a few hours going somewhere to get things back for people. Sometimes the places that sell good snacks or souvenirs are far away from where I stay or travel to. Sometimes I had to skip the place that I want to explore so that I could make time to buy souvenirs. It is a hundred percent true, and that is why I am not happy when people ask me to get things sometimes.

5I Have To Carry More Than I Want & Should

I mostly bring just one backpack when I travel, I like packing and traveling light because I walk a lot. With extra souvenirs like snacks and other things bought, I sometimes can’t fit them all in my backpack. So I had to carry them in my shoulder bag or in separate plastic bags, and I honestly don’t like that. Sometimes it is heavy, and sometimes it takes too much space on the plane. I am small, people. Y’all know that I am short, it is not so pleasant to carry so much stuff and walk.

The longer you read, the more you might feel like I complain too much. However, I know that I am not the only one. I wrote this article as a short message to a few groups of people such as:

Travellers like me are explorers. We are not wealthy, we work our asses off and save so that we can expand our horizons in different parts of the world. We travel because we want to see what it is like outside our countries. And we travel to relax and have fun, not to buy things and give them away to all the people we know. We have priorities when it comes to souvenirs, don’t demand gifts if you are not close to us.

I am still flying in economy class. I ain’t rich, sis.

Also, remember that people will get you souvenirs if you deserve to receive one. You don’t even have to ask for it, things are that simple. I am not pointing fingers, but I hope that I am not the only one who has experienced such a thing; repeatedly.

6Then When You Should Ask For Souvenirs?

It is not strictly prohibited that you should never ask for souvenirs, there are certain situations that you can. Those are when:

There are definitely more, but these are all that I can think of.

Souvenirs are given by people’s choice, not by your demand.