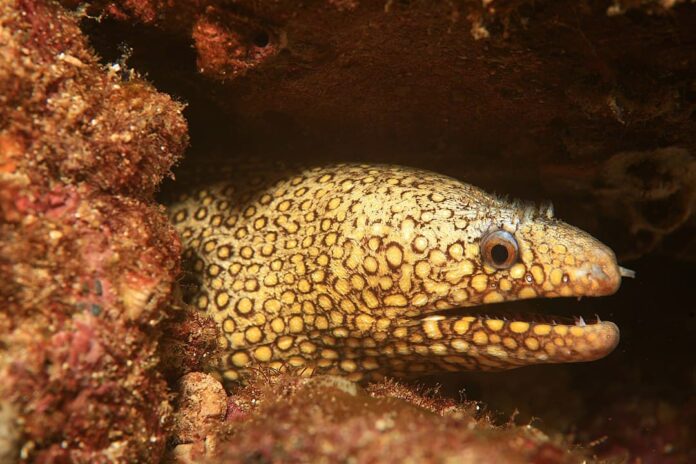 Not many of us have thought or wondered about the most dangerous eels out there in the water. As a matter of fact, there are not many of them that are likely to attack or harm humans. However, when an eel species is dangerous, they leave very bad scars. In some worst case scenarios, some victims did not even live to tell the tale of their encounter with those menacing eels. Today, I am going to introduce you to some of the most dangerous eels that divers and every one of us should be aware of. Don’t forget to share your thought with me, which ones do you think are the scariest eels?

The bad reputation of the conger eels is not that widespread, but this species is also one of the most dangerous eels. The well-known scary experience was from Jimmy Griffin, 48, who was scuba diving when the eel attacked him. It all began when the conger eel emerged from the depths and tried to drag him down to the ocean bed. At first, the eel pounced on him which knocked his breath regulator from his mouth. Then it gripped onto his face and started biting, pulling, and twisting. Luckily, he broke free but had to suffer with 20 stitches on his face followed by painful plastic surgery over the coming months. Species like this is very dangerous because they can attack us anytime, and that is why divers should be extra careful.

With scaleless bodies and eel-looking appearance, this species is often thought to be eels instead of fish. The unique thing about this so-called eel is that it can generate up to 600 volts of electricity both underwater and on land. The way they generate is in short intense bursts that last only about 2 milliseconds. You might wonder where the electricity is from and how they do that, here is why. The electrical charge of the electric eels comes from thousands of muscle cells that each create a tiny current.

Apart from using the electric charge as self-defense, electric eels also use low electric organ discharges to communicate. By doing so, they are able to detect signals and interpret information about other individuals in the water. Electric eels are not aggressive, but multiple shocks from them could cause a person to stop breathing or go into heart failure. Also, a single jolt could incapacitate a person long enough to cause them to drown, even in shallow water. The danger of the shock depends on the size of the eels, the bigger they are, the more dangerous they get.

Native to freshwater in Southeast Asia, fire eel is a relatively large species of spiny eel. This eel species is somehow popular as pets for some reasons, and there are a few things that you should know. Fire eels got their name from their small dorsal spines that precede the dorsal fin which somehow resembles fire. Those spines are the part where they get dangerous, especially for those who try to catch or hold them. The spines are not poisoned, but they can cause pain and minor bleeding at some point. The dangerous part is that the slime that the eels produce is toxic. In case one of them bite you, the victim must apply antiseptic to the wound as soon as possible.

When it comes to the world’s most dangerous eels, no species can beat the family of moray eels. This species is the true monster of the ocean and sea, and snorkelers and divers know them so well. With the mention of dangerous eel attacks, the ones from moray eels are always on the list; very often. Moral eels have a snake-like body, and their large mouth is equipped with rows of sharp dangerous teeth. They have two sets of jaws, and their teeth are pointing backward so that prey cannot escape from their grip.

There have been countless attacks by moray eels underwater, and victims lost their limbs, chunks of their faces, and more. There are more than 200 known species of moray eels, and sometimes they hunt in groups. Moray eels are not aggressive despite their fearsome attacks, they are actually territorial and they only strike when they feel threatened. Most attacks occurred when divers or snorkelers stick their hands into a crevice in search of an octopus or lobster. Some attacks are when they attempted to feed the eels, a bad decision indeed. Since they are one powerful and scary species, moray eels only have a few predators such as grouper, barracuda, sharks, and us humans.

Abundantly found in tropical and subtropical seas, especially on coral reefs, Muraena is also one of the menacing eels. Just like most dangerous eels out there, this species has a wide mouth, strong jaws, and razor-sharp pointy teeth. The eel can inflict serious and dangerous wounds in just one bite, on both their enemies and people. There haven’t been any records of their attacks on humans yet; however, it is better to avoid being their victims. Losing meat chunks or limbs to this scary-looking creature is never a pleasant thing.