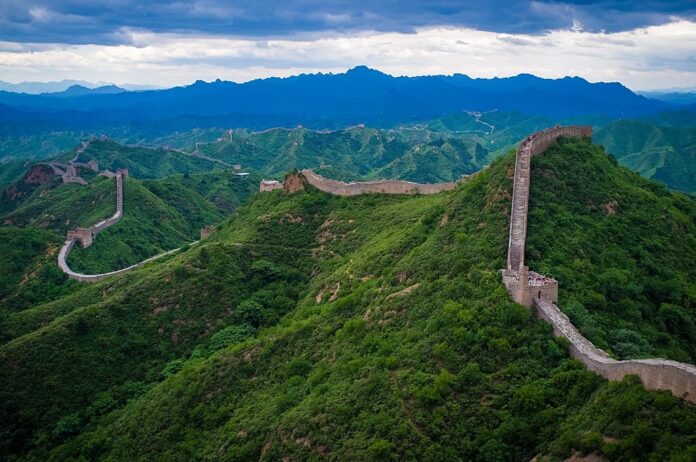 Walls is the word that reminds you of Donald Trump’s plan, and he uses that word a lot. However today, we can forget about that invisible wall and take a look at some real walls here. Before, rulers or leaders of many countries often thought that building the largest walls would keep their kingdom safe. With walls, invaders would find it difficult to cross the border or provoke any chaos. That is why nowadays, there are several famous walls that have become tourist attractions remained from the old days. Below we have 8 countries with the most famous walls that you probably want to know about. Check them out.

The walls surround Great Zimbabwe, which was the capital of the Kingdom of Zimbabwe back in the old days. The kingdom nowadays remains in ruins behind the large towering walls. The walls divided the people base on their social class and wealth. It was obvious that those who lived inside enclosures possessed more social power than those who lived outside the walls.

At the center of the walls once stood a city where thousands lived centuries ago. The word Zimbabwe consists of two key root words, -mba which means house, and -bwe which means stone. So It means House of Stone, and that is how the name of the country begins and remains until now.

Got the name from the Emperor who ordered its construction, Hadrian’s Wall stretched from northern Britain to the deserts of Arabia. It took about 6 years to build by 15,000 men more or less since 122AD. Today, only 10% of the original wall is now visible since it has failed to survive the last 2,000 years. The interesting thing about this wall is the archaeological sites and museums along the wall that tells an epic story about Rome’s rise and fall.

In case you are a fan of Game of Thrones, this wall is where George RR Martin used as an inspiration. Yup, the ice wall.

“It could have been any kind of monster. It was the sense of this barrier against dark forces – it planted something in me. But when you write fantasy, everything is bigger and more colorful. So I took the wall and made it three times as long and 700 feet high, and made it out of ice.”

Tricky name indeed, Sacsayhuaman aka Saksaywaman means Royal Eagle is one splendid architectural structure to ever built. It is believed that around 20,000 men worked to cut and transport gigantic stones from Huaqoto and Rumiqolqa to build the walls. As you can see, this is indeed a fabulous wall made of stones that weigh from 99 to 138 tons.

The stones are different in sizes and shapes, some of which have more than one hundred angles. All of them joined and fitted one to another with no mortar of any kind, and that is absolutely impressive. Not to mention the walls were so expertly interlocked that the site has survived countless earthquakes, but that’s not all. That my friends, is only half marvelous, wait until you see the whole structure from the sky. The view is totally mesmerizing and magnificent, no doubt why this one is among the countries with the most famous walls.

Despite the fact that this wall is not in its original form anymore, Berlin Wall is still one of the famous walls. During the early years of the Cold War, West Berlin was a geographical loophole through which thousands of East German fled. So the official purpose of the wall was to keep Western fascists from entering East Germany and undermining the socialist state.

It was a 12-foot-tall and 4-foot-wide mass of reinforced concrete topped with an enormous pipe that made climbing over nearly impossible. Behind the wall on the East German side was a so-called Death Strip which is a gauntlet of soft sand. There were also floodlights, vicious dogs, trip-wire machine guns, and patrolling soldiers with orders to shoot escapees on sight. Still, there were people trying to get over the wall like by climbing over the barbed wire, flying in hot air balloons, etc.

The wall stood for about two decades until the East German Communist Party made an announcement. The party announced that citizens of the GDR could cross the border whenever they pleased. That night was when the ecstatic crowds swarmed across the wall. At that time, some crossed freely while the others brought hammers and picks to chip away at the wall itself. Yet to this day, Berlin Wall remains one of the most powerful and enduring symbols of the Cold War.

5The Great Wall of China

It was in Qin Dynasty when the first Emperor of China, Qin Shi Huang aka the Father of the Great Wall had it built. The walls were actually built before by individual states to keep out the invaders since the 7th century. So when Emperor Qin was in power, he ordered the walls connected, lengthened, and join all the walls together. That made it bigger and stronger which became the Great Wall of China nowadays.

It is the longest and perhaps the most beautiful wall in the world as well. Back in the old days, the Great Wall of China had military motivations to protect China from its marauding neighbors. The wall has a combination of everything like stone, brick, tamped earth, wood, and other materials. The wall is so long it would take you around 18 months to walk its length.

When there is a long wall, the main reason is to protect the kingdom or city from invaders. As for Babylon, the walls were made of blue-glazed tiles featuring bas-relief dragons but that’s not all. The King also fortified the old double walls of Babylon by adding another triple wall outside the old wall. More than that, he erected another wall, the Median Wall, north of the city. According to the estimation of Greek, the Median Wall may have been about 100 feet high. The reports about the height and thickness of this wall are uncertain, but the walls are amazing still.

If you are a history geek, you are probably familiar with Trojan War which involved with Greek horse strategy. Every story told about Trojan Horse is always about how to get over the walls, Walls of Troy. The story is probably fiction, but that doesn’t mean there was never a Trojan War. After about 4,000 years, we can only see little remains of the city and the walls themselves.

Some describe Troy as well-founded, strong-built, and well-walled along with towers. Some even said that the walls were unusually strong in order to withstand a ten-year siege. That was one of the reasons why the Greeks used the Trojan Horse trick to get through the wall. It has been thousands of years, so what happened in the past only remains history now.

Western Wall aka in Islam as Buraq Wall is an ancient limestone wall and the most religious site in the world for Jews. Thousands of people journey to the wall every year to visit and recite prayers; either spoken or written down. King Herod the Great was the one who ordered the building of the Western Wall in 20 BCE. The purpose was part of the expansion of the Second Temple, but it never did. As for now, the wall has become a location of various ceremonies like military inductions and more. The Western Wall is free and is open all day, all year round. Make sure to dress modestly with your legs and shoulders covered if you want to pray there, it is a sacred place.