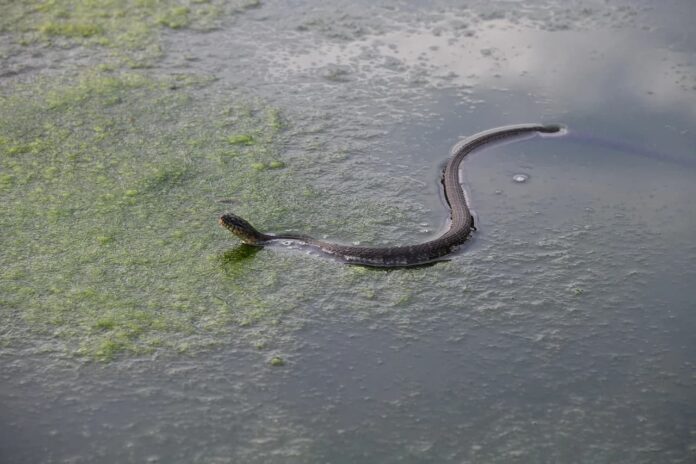 Water snakes are non-venomous snakes that spend most of their time in or around the water. These snakes are harmless to humans, and there are numerous species of water snakes out there with their own distinctive appearance. Since they are harmless and worth learning about, we are here to bring you some interesting facts about them. First fact tho, water snakes live in freshwater which is a totally different thing from sea snakes that live in marine environments. Without further ado, let’s find out about the water snakes with us together.

So water snakes come in different colors and patterns that not all of us non-experts can remember. Their colors and patterns depend on their species, but most are the variation of gray, brown, red, and dark green. The one thing that you can notice in most water snakes is that they have dark bands or splotches on their backs. Also, they can appear to be solid brown or black when they are wet.

The main thing that you can tell right away that a snake is a water snake is its pupils. Yes, you have to be close enough to tell which snakes are venomous and which are not. Water snakes have round pupils, and their scales feel rough. Another point to notice a water snake is their head and neck. They have a narrow and round head along with a long and slender body as well as a distinctive neck.

Just because they are non-venomous doesn’t mean they are nice, water snakes are known to be aggressive. Most of them tend to hiss or bite as a defense when handled, and no they don’t make good pets. Sometimes you don’t even need to touch them, they become aggressive when approached as well. Another defense mechanism of water snakes is the release of a pungent secretion from glands near their tails. While some other species will defecate or vomit if feel threatened.

The name already suggests their habitat. Where there’s water, there are water snakes. You can find them in many types of water sources such as ponds, lakes, rivers, marshes, etc. The thing is that they prefer relatively quiet waters where they can chill all by themselves. More than that, these snakes love to sunbathe, and they will go under flat rocks and logs when they are done sunbathing. Sometimes they also venture on land and climb trees, but they never stray far away from a water source still.

Water snakes usually hunt either in or near water, and they only hunt out of water when the food is scarce. Just like most land snakes, water snakes prefer a diet of anything they can swallow such as fish, frogs, toads, salamanders, and other amphibians. The interesting thing is that smaller water snakes prefer slow-moving fish because that is easier for them. Not greedy like land snakes, aren’t they?

Water snakes swallow their prey whole and while they are still alive, no suffocation is needed. They simply hang out in shallow water with their mouths open, waiting for their prey to pass by. When the time comes, the snakes will snap their jaws around their prey and devour it right away. Sometimes they search for prey on the lake or river bottom, under rocks, branches, and in crevices for hiding prey.

These snakes are not venomous, but some species produce venom-like proteins in their saliva. The protein makes wounds bleed more profusely which makes it easy for the snake to follow the trace if the prey escapes. That kind of protein poses little risk to large animals and humans, it is a threat to only smaller prey.

Basically, water snakes mate in the sprint after they come out of hibernation. The males will court the female by rubbing his chin along her back, and they bring their cloacal openings together. Females typically only mate with one male per season, but some will mate with two in some cases. They breed each year, and they are among the viviparous snakes that give birth to live young. They give birth to a litter of around 20 live snakes, and sometimes even up to 100. The cool part is that the babies are independent as soon as they are born, simply amazing.