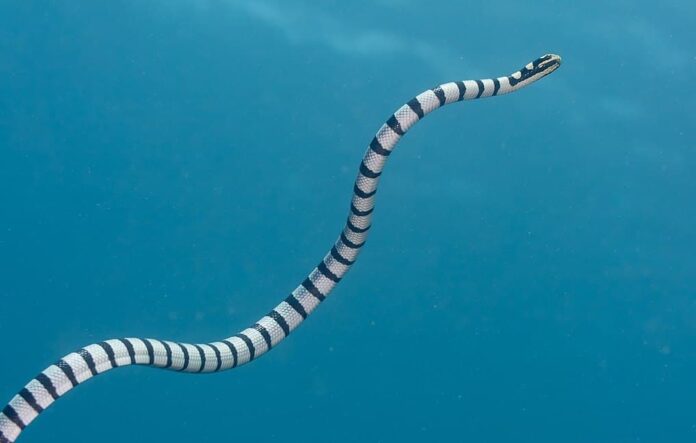 Sea snakes are one of the most dangerous and venomous snake species that roam in the sea. This type of snake inhabit marine environments for most of their entire lives, and some are unable to move on land. The good thing about sea snakes is that they are usually not aggressive unless provoked or cornered. Although bites are quite rare, all species of sea snakes are potentially deadly to humans. However, you should always be aware of which type to stay away from because accidents happen. There are 60 species of them in total, but let’s just look at the most dangerous sea snakes with us below.

Those scales are pretty eerie, don’t they? Olive sea snakes are one of the most dangerous sea snakes that roam in the ocean and sea. This snake has brownish and purple scales along the top of its body with a white underside. Also, it is a common and widespread species that lives on coral reefs or hide in small coves and protective coral areas. Olive sea snakes are not aggressive, and biting is not common but you should be cautious still.

Habitat: Tropical Oceanic Waters except for the Atlantic Ocean

This species is among the widely distributed sea snakes in the world, and you can see them even in Russia. The unique thing about yellow-bellied sea snakes is that they tend to avoid cold water, especially during weather changes. You can easily notice them by the distinct yellow lower half of their body, and their black or brown upper body. On top of that, they don’t have many predators since the colorful body warns that they are venomous.

This sea snake species is also the most aquatic snake since they don’t set their scales on land or seafloor at all. They feed on fish, both alive and dead. Plus, they are great swimmers since they can move both forward and backward. Yellow bellied sea snakes are surprisingly docile, and they only strike a human if picked up or handled roughly. If they bite you, their venom is toxic enough to cause muscle pain, stiffness, droopy eyelids, drowsiness, vomiting, paralysis, and death.

Also known as hooked-nose sea snake or common sea snake, this species likes to lurk at the bottom of murky waters. As you can see, they have small heads with a plump olive green upper body and bluish bands along with a white belly. Their snout looks like a beak since it is slightly curved downward, and that is how they got their name.

These sea snakes are active both day and night, and they can dive up to 100 meters and stay there for up to five hours. Beaked sea snakes are dangerously venomous and aggressive, and their venom is highly potent. The venom of this snake species is as eight time as venomous as a cobra’s venom, pretty deadly. They feed on bottom feeders such as catfish and shrimp, and they locate their meal by smell and touch.

You can easily remember this species by their slightly thinner head and neck compared to the rest of the body. It is the only sea snake with spines on the head, and that is one of the things that we can easily notice. Another unique part about this sea snake is that they have nostril valves that prevent air from entering the lung while underwater. Despite the fact that they are among the most dangerous sea snakes, there have been no recorded bites on humans from them.

Dubois’s sea snake aka reef shallow sea snake is a species of dangerous sea snakes to avoid. Usually, they live in coral reef flats, sandy and silty sediments that contain seaweed, corals, and sponges that they use as shelter. The thing is that their level of aggressiveness is medium, and they only bite when provoked. Yet the bad news is Dubois’s sea snakes are one of the top three venomous snakes in the world. Definitely the type to remember and keep the distance from.

Such nice name derived from their distinct black uniform stripes that cover their blueish gray body. The cool part about this sea snake is its large paddle-shaped tail that allows them to swim better. This species is great at hunting eels which they are able to locate by sneaking through crevices and cracks in the reef. They take advantage of their venom by using it to paralyze their prey before swallowing it whole.

As for their venom, it is 10 times more powerful than that of a rattlesnake. Once they bite you, the venom will result in convulsions, paralysis, cardiac failure, and eventually death. The good thing is that this species is extremely docile and non-aggressive, they do not attack unless in self-defense. While some other times, they often choose not to bite even if provoked. Their only human victims are the fishermen who accidentally caught them in their net without knowing they were there.

Here we have an extremely venomous species of elapid sea snakes that we all must avoid at all costs. As a matter of fact, they are the most venomous snakes in the world with venom over 100 times that of a cobra. In spite of their dangerous venom, these dangerous sea snakes are quite docile and surprisingly pretty friendly.

They almost never bite humans unless heavily provoked, and they don’t release all their venom even if they do. This species can stay underwater for as long as 8 hours before they come to the surface to breathe. Belcher’s sea snakes normally feed on fish and shellfish within their habitat, and they prefer living in warm and tropical areas.