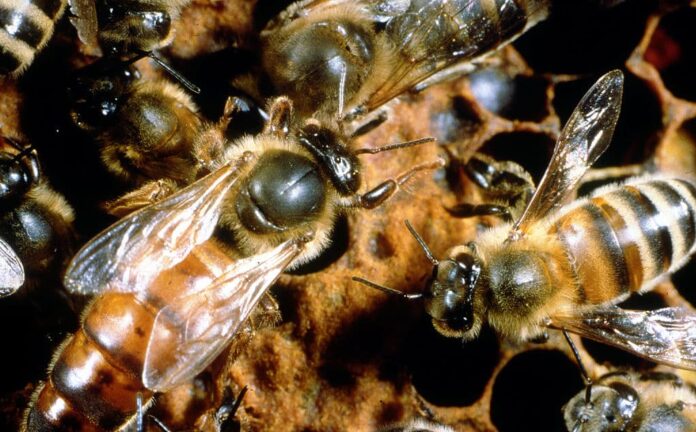 Thanks to all the queen bees out there, honey wouldn’t be here without them. There are many interesting facts about queen bees that many of us might overlook at some point. That is why today we bring you some awesome and fascinating facts about queen bees. In the colony, there is an adult mated female that is usually the mother of most bees in the hive. So queens developed from larvae selected by worker bees and specially fed in order to become sexually mature. Since there is only one adult mated queen in a hive, the bees always follow and fiercely protect her.

The name might imply her job, but queen bees do not directly control the hive like queens in our human term. A queen bee’s sole function is to serve as the reproducer, and a well-fed queen can lay about 1,500 eggs per day. The awesome thing is that the queen bee is able to control the sex of the eggs she lays. There are more facts about queen bees below, so check them out and learn more about our nature!

1Queen Bees Are The Largest

It is not a single doubt because the queen bee carries ovaries in her long abdomen to produce a lifetime’s quantity of eggs. The size of a honey bee queen is around 2 centimeters which is about twice the length of a worker. Despite the fact that the queen bee is the largest, it is still difficult to spot one among thousands of worker bees.

Just like in a pride, there is only one male to conquer them all. Queen bees need to fight each other to the death until one last queen remains alive. In case you don’t know, queen bees are gifted with unstoppable stingers that allow them to sting continuously and live to tell the tale. That means they can sting one another repeatedly until someone dies. In order to live, virgin bees must travel around the hive calling each other out to fight to the death. You gotta fight for the crown, there are no exceptions even in the animal kingdom.

3Queen Bees Do Not Mate Inside The Hive

Mating is supposed to be fun and wild after all, no doubt why queen bees prefer mating in the air instead. A few days after emerging from her queen cell, a queen bee will take flight on a warm sunny afternoon. She then will fly to a location where drone bees are congregated before they all mate in mid-air. Our queen mates with around 12 and 20 drones, and that is it. You might question why in the air though? If the virgin queen bee mates inside the hive, there is a higher chance she does it with her brothers. Being away from the colony brings a better likeliness of mating with unrelated drones.

Yes, two times is all a queen bee needs to leave her hive. The first time is for her maiden mating flight of course, and the only other time is if the colony swarms. The queen does not need to leave the hive to find food or do anything, she has workers to take care of everything. The queen consumes royal jelly which results in little waste production, and she has her daughters to feed and clean her. That is why a queen bee needs no reason to fly at all.

5Queen Bees Mate Only Once In Life

We can rewind a little back to the mating ritual, and let’s talk about it in detail. So the mating ritual happens suddenly right after the battle among the queens. During the mating, several male bees mate with the queen while she’s flying through the air. After they finished mating, the male bee must depart which requires him to leave his abdomen behind. Yes, the abdomen remains connected to the queen. The queen mates with a lot of males, so she will have up to 100 million sperm cells in her body. That is enough to use throughout the rest of her life.