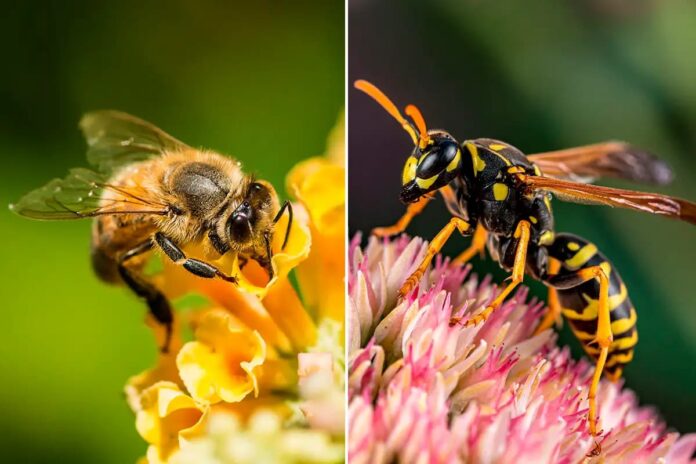 When two creatures look similar, you need to learn their differences especially when one is dangerous and another is not. Differences between bees and wasps are one of the basic things that we should be able to tell apart. Well, that is because a bee sting is bearable while a sting from a wasp causes pain at a higher level. At a quick glance, some may confuse bees and wasps with each other; and that is not a good thing. That is when you realize that it is a mistake to waft that flying insect you thought was a bee. So, below are some obvious differences between bees and wasps that help you to be able to tell which one is which.

It is true that both bees and wasps wear black and yellow jackets which somehow seems to be confusing. However, the difference between these two is the look and shape of their bodies. Wasps have smooth bodies and legs that are long and thin along with a narrow waist. You can also tell that that is a wasp when you see two pairs of wings; however, some wasp species are wingless! When flying, wasps tuck their legs in just like an airplane tucks its wheels up.

As for bees, they have a hairy body and hairy legs which are wider than wasps’. Those big legs help them to carry pollen from flower to flower easily as they fly. Also, bees have long and robust bodies with dangling legs with the same two pairs of wings that confuse you. Another difference is that bees don’t tuck their legs when flying like wasps at all.

That involves the way that bees and wasps sting, and you can immediately tell which insect attacks you. Wasps are very aggressive, and they are able to sting you and their targets multiple times. When stinging, wasps inject their venom with a stinger into your skin before flying away. The thing is that only female wasps have a sting, and they do not hesitate to use it when feeling threatened.

Bees are not aggressive, and the only species that can only sting once is honeybees. As for other bees, they can sting multiple times just like wasps but it is very uncommon among them. Honeybee is the one that stings us the most despite the fact that they will die after that. A honeybee’s stinger is barbed, and it sticks in your flesh which stays there when it stings you. As it tries to fly away, the stinger rips from its body taking out its digestive system. Then that honeybee eventually dies from the trauma.

These two are totally different from each other when it comes to feeding, you are what you eat you know. Wasps are naturally aggressive because they are predators, and they feed on insects like flies and caterpillars. Sometimes wasps also eat fallen fruit as well as other sweet food as well. No doubt why you can see some of them near a fizzy drink when you go out on a picnic. Not to mention wasps go into bee’s nests to eat the honey and bee larvae, these are bad insects.

Bees are softer in nature , and these pollinators feed on pollen and nectar from different flowers. Apart from flowers, fruit is another food that bees eat but not a major meal like flowers. Pollen provides nutrition that honeybee needs while nectar is what they convert into honey. Honeybee larvae often eat honey, and they begin to feed on pollen and nectar as they grow up.

In case you can’t tell if the nest you see belongs to a bee or wasp colony, keep on reading. Wasps tend to live in smaller colonies with a population of just around 10,000 or less compared to bees. The queen wasps build their nests in a hexagon shape from paper or wood with perfection because they are very good architects. Wasps hibernate throughout the winter and then build a new year to get ready for the next year.

The nests of the bees are in various places from up in a tree and dense grass to underground and in abandoned burrows. They build their home from a string of vertical combs out of wax with different sections. Unlike wasps, bees normally surround the nest because they are hard workers that don’t usually relax that much. A colony of bees can reach a population of up to over 75,000 in one nest, and honeybees is the species with the most members. Bees don’t hibernate, they live on the food that they reserve through the winter.

5Treatment To The Sting Of Bees & Wasps

Just one sting from a bee or wasp will cause a burning feeling at the site of the bite. Then the site might swell, turn red, and itch right after the insects have stung you. One sting is still okay, but multiple stings are more serious since they can cause fever, headache, muscle cramps, and drowsiness. Just so you know, stings are not usually life-threatening but can be if you are allergic to bee venom.

There are also differences between bees and wasps when it comes to their stings. When a bee stings, it leaves both its stinger and venom sac inside a victim’s skin. When a wasp stings, it leaves behind only a stinger without any excess venom at all. Sometimes it doesn’t even leave the stinger which allows it to sting again and again.

Remember to never remove a stinger by pulling at it or using tweezers. Doing so will put pressure on the stinger and squeezes it which injects even more venom into your skin. So follow the steps below if a bee stings you:

The pain will go away, and you can take the victim to the hospital for more treatment if you’d like.