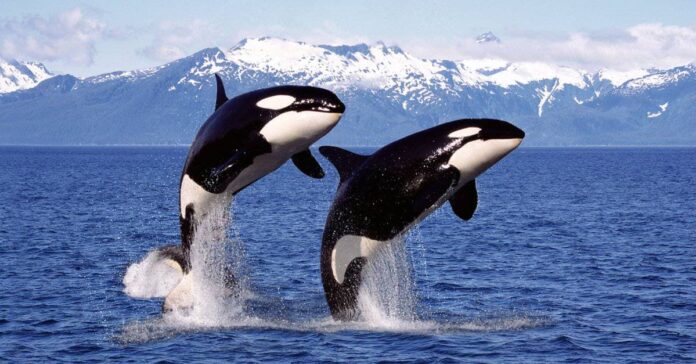 Probably the cutest-looking dolphins among their relatives, orcas are interesting marine mammals to know about. Also known as killer whales, orcas have a distinctive appearance of a large black body with white undersides along with white patches above and behind their eye. Despite the fact that their nickname is killer whales, orcas actually belong to the dolphin family but with a scary twist. You can find these ferocious dolphins in the seas and oceans in most coastal countries. There are many more things to know about them, so let’s take a look.

1Why Are They Called Killer Whales?

A bit about them, killer whales are on top of the food chain which means no animals prey on them. Back in the old days, whalers called them “whale killers” but the name got flipped around to “killer whales” instead. Their nickname is so well-chosen based on their ability to take down large marine animals that are even bigger than them. The trick is they use their massive teeth that can grow up to 10 centimeters long to hunt. Each killer whale has around 45 of those long teeth which are shaped for ripping and tearing prey. With those teeth, killer whales can get pretty much almost any animals they find in the sea. No doubt why these larges dolphins are one of the world’s most powerful predators.

2What Do They Eat?

Since they are on top of the food chain, their menu consists of everything. Their daily diet includes walrus, seal, sea lion, penguin, squid, sea turtle, shark, and of course, whales. They are known to grab seals who are chilling on the ice right into the sea. Depending on the season and where they are, what they eat are always different from one another. An average-sized orca may eat about 227 kilograms of food a day, so any food that can meet that amount will do.

Usually, orcas hunt in pods (family groups) that consist of members up to 40. There are two types of pods such as resident pods and transient pods, and each pod has different preferences and hunting methods. Resident pods prefer fish while transient pods hunt marine mammals instead. In either type, all pods use effective and cooperative hunting techniques that are similar to the behavior of wolf packs. Sometimes a pod of whales will join forces to surround a larger mammal like the blue whale. All of them will chase, bite, and wear their prey down till it becomes weak enough for them to feast on.

Fun Fact: A killer whale can swallow a small sea lion or seal whole without the need or chewing at all.

A pod refers to a group of orcas together that usually consists of a mature female, her adult offspring, and her daughter’s offspring. An orca pod can be as large as 40 members, and the oldest female often leads the group. A female killer whale will give birth in every three to ten years to only one offspring at a time. A baby orca is called a calf, and the mother will nurse the calf for up to two years. If the bond weakens, the young will go their own way but the juveniles stay in the pod their entire life in some cases.

4Do They Have Natural Predators?

Orcas are apex predators, and they are on top of the oceanic food chain so they have no natural predators. Even humans do not usually include killer whales in the whaling industry due to some reasons. First is their speed, orcas are very fast swimmers and they can swim up to 54 kilometers per hour. Plus, they can dive deep into the oceans as well which makes it even more difficult to catch them. Another thing is their streamlined bodies that don’t provide much oil the way whalers want. It would take 21 killer whales to produce the same amount of oil as one sperm whale. So to cut things short, orcas can freely hunt other oceanic creatures with zero fear of being hunted at all.

5How Do They Communicate?

Orcas are smart and social animals, they are dolphins so they are very intelligent. Just like their relatives, orcas make a wide variety of communicative sounds especially echolocation to talk to each other and hunt. They will make a sound that travels underwater until they encounter objects then bounce back. As the sound wave comes back, the orcas will be able to detect the location, size, and shape of that object. If that is food, then voila dinner is served. If that is an orca, they will just say hi and go back to their business. How cool is that, right?

As a matter of fact, yes. Orcas are cetaceans; therefore, they have the ability to rest one side of their brain. That means the side that is awake has to regulate breathing and prevent drowning while the other side takes a nap. More than that, they only close one eye when they sleep so that they can rest without losing consciousness. When sleeping, orcas swim very slowly and steadily close to the surface. So if you see an orca with one eye open, that means you are looking at a sleeping orca.

7Do They Attack Humans?

Orcas don’t generally attack people in the wild, and we don’t know exactly why. One theory says that because the wetsuit makes us effectively invisible to an orca’s sonar. However, orcas behave differently in captivity, mainly in zoos and aquariums. There was this orca named Tilikum who was involved with the deaths of three people on separate occasions in Sea World. Other than that, there are no more other human deaths caused by orcas recorded at all.