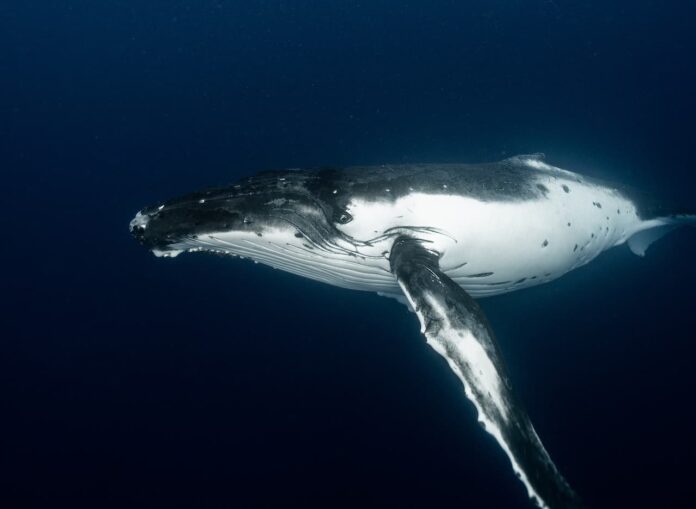 With the distinctive body shape of a long pectoral find and a knobbly head, humpback whales are not difficult to recognize. The breaching whales that you often see in some viral videos on Internet are mostly humpback whales. Being among the largest whales and once hunted to the brink of extinction, these whales are found in seas and oceans around the world. They feed in polar waters, and their diet consists mostly of krill and small fish.

One of the interesting things about them is their beautiful songs produced by males which last from 10 to 20 minutes. The songs are often heard during mating season, and they may also use the song as a form of communication as well. Their songs are a combination of moans, cries, and howls that can be heard underwater for miles. When not in mating season, individuals usually live alone or in small transient groups that disband after a few hours.

Just like other large whales, the humpback was one of the targets of the whaling industry. Even now that whaling is no longer widely practiced, there are still threats to humpback whales. Those are collisions with ships, entanglement in fishing gear, and noise pollution. Humpbacks can be injured by excessive noise, and the fractures in their ears can lead to their death. The good thing is that their population is now back on track with about 80,000 individuals worldwide.

Bowhead whales are among a few whales that live in the Arctic and Sub-Arctic all year round. At the same time, they are also among the most sought-after species for whale watching in the Arctic as well. This whale is an unusual species because they don’t have a dorsal fin, and these whales also have the largest mouths. On top of that, the bowheads have massive triangular skulls which they use to break through the Arctic ice to breathe.

Just like most baleen whales, this one swims forward with their mouths wide open.
Their diet consists mostly of zooplankton like copepods, amphipods, and many other crustaceans which they consume about 1.8 tons a day. Eating that much and weighing that much, bowhead whales are surprisingly able to breach entirely out of the water. Back in the old days, hunters hunted them for blubber, meat, oil, bones, and baleen. These whales swim slowly and they float after death which makes them ideal for whaling. As for now, their population is about 10,000 and growing which is a good thing.

This baleen whale is named after John Bryde who was a Norwegian who helped to establish the first whaling station in South Africa. This type of whale is remarkably elongated with its great length and weight, and they reside in tropical and subtropical waters. You can find them on the coast of Southern Africa as well as in Mexico, the Caribbean, Hawaii, and California. Bryde’s whales have spectacular feeding behaviors that involve lunging mouths agape through schools of fish and krill.

This whale species usually appear individually or in pairs, and some other time in loose aggregations up to 20 around feeding areas. As for their population, there are about 90,000 to 100,000 worldwide, and this species is not targeted by commercial whalers at all. Their only threats that killed or injured them are mostly ship strikes which happen from time to time. Apart from that, Bryde’s whales are safe and are able to roam the marine areas freely.

Also known as the Pacific Gray or California Gray Whale, these whales are gray in color and they live in California coastal waters. Gray whales breathe air through two nostrils called blowholes that are located on top of their head. The unique thing about them is that there are clusters of barnacles on their skin which is as unique as our fingerprints. More than that, gray whales have baleen instead of teeth which they use to dive, scoop, and swallow tiny crustaceans. You might see white scars on their body, those are the scars left when parasites drop off which is not uncommon. Despite the fact that they are large, gray whales still have two main predators which are humans and orcas. Their population at the moment is approximately 26,000, and you can only find them in the Pacific Ocean.

Sei (pronounced “say”) whales are one among the largest whales who prefer deep offshore waters that inhabit most oceans and adjoining seas. You can easily recognize a sei whale by the irregular white markings on the front of its body. These large whales avoid polar and tropical waters as well as semi-enclosed bodies of water. With their size, a sei whale consumes an average of 900 kilograms of food every day. Using their baleen, sei whales feed on zooplankton and small fish which are low in the food chain. These whales are fast swimmers, and they can go as fast as 50/kmh over short distances. Due to whaling, their current population has been declining to around 80,000 at the moment.

Sperm whales are the largest among toothed whales, and they are also the largest toothed predators as well. They are one of the few whale species that can live in a range of environments. Therefore, you can find them in oceans across the world. You can also easily recognize them by their long block-shaped head along with their gray or black skin. Usually, the females and young males live together in groups while the mature males live in solitary when mating season is over. Female sperm whales give birth every four to twenty years, and they spend more than a decade caring for the calves.

Spermaceti aka Sperm Oil was a prime target of the whaling industry which was used in oil lamps, lubricants, and candles. People also use their Ambergris, which is a solid waxy waste product that is present in the digestive system, as a fixative in perfumes. Back in the 19th century, sperm whaling was a major industry that led to the rapid decline of their population. Perhaps that is the reason why sperm whales become more aggressive and attack boats sometimes. The best estimation of their population is that there are over 200,000 sperm alive today.

Was called “the greyhound of the sea” for its beautiful slender body, fin whales are one spectacular marine mammal. This whale species can surpass the speed of the fastest ocean steamship with a speed of 30 miles per hour. You can find them in all oceans of the world, and they prefer temperate and polar waters. These whales usually swim in the open sea away from the shore, and they can dive and stay underwater for 20 minutes. Fin whales eat 2 tons of food each day, and they usually feed in cold waters. Krill is the basic type of food for fin whales, and they also feed on sardines, cod, herring, and mackerel during winter.

There are a few main factors that decrease their population such as whaling, noise pollution, and drastic reduction of food. Apart from that, collisions with ships and entanglement in the fishing nets also play a part as well. With all these combined, their number keeps on going down and they are now listed as endangered animals. The estimation of their global population now ranges from less than 100,000 to roughly 119,000 which is not a really high number.

The North Pacific Right whale is one among the collection of three very similar right whale species. Found in North Pacific, this whale species is a critically endangered species with a very low population nowadays. These whales are robust with a thick blubber layer and a girth sometimes exceeding 60% of their body length. Their flippers are large, broad, and blunt, their bodies are black in color with irregular patches of white. Whales are born with those patchy spots known as callosities on their faces, lower lips, chin, above the eyes, and around the blowholes.

These whales feed on krill and larval barnacles, but they prefer large calanoid copepods. However, they consume whatever they pick up by their baleen at the end of the day. They need to eat a lot to meet their caloric needs which is between 400,000 and 4.1 million calories each day. Sometimes a whale would spend 24 hours feeding in an area where food is not abundant. There are some factors that affect their population such as oil exploration, extraction, transport, spills, environmental changes, entanglement, noise pollution, and more. Their population is around 30-35 in the eastern North Pacific and more than 300 in the western portion.

Northern Right Whale aka Black Right Whale is a unique whale species that has up to 40% of blubber in its body weight. The blubber is helpful for them as it allows them to regulate their temperatures by keeping heat when they are in cold waters. Despite the cool fact that they can dive very deep and stay underwater for up to 40 minutes, these whales are slow swimmers. Normally, they feed on copepods and other small invertebrates like krill, pteropods, and larval barnacles.

This is one of the most critically endangered populations of large whales in the world, and here is why. These whales are docile and slow, and they always stay close to the coast so they were once a preferred target for whalers. Plus with their high blubber content that produces high yields of whale oil, whalers hunted them till they become endangered. Apart from that, ship strikes, fishing gear entanglement, noise, and climate change also play a part in their population decline as well. There are only about 440 individuals in the oceans nowadays, let’s hope they won’t go extinct.

Blue whales are not only the largest whales in the whale family but also the largest animals in the world as well. Just like their name suggests, the coloration of this whale species is dark blue with a paler underside. The blue whales can grow to over 30 meters long which is longer than 3 buses lining up. These whales have long and stream-lined bodies along with a huge head and huge flippers. You can find blue whales in all oceans of our planet except the Arctic due to their preference for temperature.

Blue whales usually swim alone or in groups of two to four. However, there may be as many as 60 blue whales come together if there is a lot of food available. In spite of their enormous size, blue whales feed on krill while some other time on small numbers of copepods. An adult blue whale can eat up to 40 million krill a day which is about 36,000 kilograms. Blue whales are great swimmers, and they can go over 30km/h as well as dive at a depth of 500 meters to chase food.

Back in the old days, blue whales were not easy to catch or kill due to their speed and power. Until 1864 when Svend Foyn, a Norwegian whaling philanthropist equipped a steamboat with harpoons which were especially designed for catching large whales. That was the beginning of the heavy hunting for blue whale, and they became endangered in just a century. There are only about 10,000 to 25,000 blue whales left in the wild today, and they are now endangered.