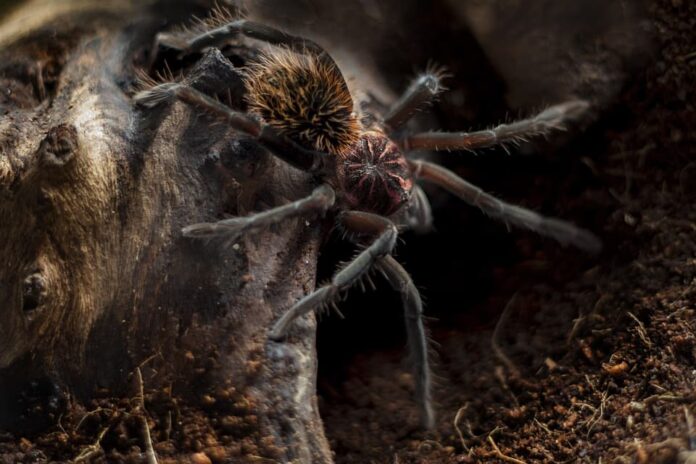 Spiders are never the cuddly animals that many of us are fond of, let alone knowing that the largest spiders are huge. When it comes to the talk of spiders, we feel the crawls of their hairy legs on our bodies already. The thing is that some of the largest spiders in the world are also venomous as well which is totally bad news. To clear the doubt about which of the large spiders are venomous and which are not, feel free to take a read. You never know when will this article I did research on today come in handy, but it will.

With a leg span of 13 to 15 centimeters, this spider species is quite big and scary to look at. Plus with their large red mandibles on their face, Brazilian wandering spiders are not anything cuddly at all. These large spiders like to hide in dark and humid places, especially in human dwellings, and they go hunting at night. Also, they don’t reside in a lair or maintain a web at all, they only wander the jungle floor at night. Their menu consists of insects, other spiders, small amphibians, reptiles, and mice, and they eat anything they can catch.

Very. This spider species is not only venomous but also aggressive, and they are always ready to attack. Their bites are a means of self-defense, and they only bite if they are provoked intentionally or by accident.

There have been a lot of myths circling around about the scary reputation of camel spiders. The rumors painted them as large and venomous predators that are as fast as humans, they have a voracious appetite for large mammals. The legs of these spiders can be as long as 15 centimeters, and their body length can be up to 7 centimeters. These spiders are large, tan, hairy, and ferocious-looking which is why many people fear them.

They may be one of the largest spiders, but they don’t eat camel’s stomachs or sleeping soldiers at all. The truth is they can put an end to insects, rodents, lizards, and small birds. Usually, they seize their victims and turn them into a pulp with a chopping or sawing motion. Also, these spiders utilize digestive fluids to liquefy their victims’ flesh which makes it easy to suck the remains into their stomachs. That is pretty much what they do, they don’t harm us at all.

Nope, camel spiders are neither venomous nor deadly to humans although their bite is painful.

Hercules is not only one of the heaviest and largest spiders but also the rarest as well. Their leg span can be as long as 20 centimeters, but don’t worry because they are very scarce. The last time these spiders were seen in the wild was in 1900, and they live particularly in Nigeria. In case you wonder, these spiders don’t eat baboons. They dine on bugs, insects, and other smaller spiders that they could find on the forest floors. Hercules lives in the deep and dark silk-lined burrow during the day, and they leave at night in search of food.

Well, their venom is not strong enough to hurt humans but their bite is a little uncomfortable. They only bite when provoked which is not painful at all. Not to mention that they haven’t appeared in the wild for a hundred years, you don’t have to worry.

Also known as Colombian Lesserblack, this is one stunning spider with the very fabulous appearance. These spiders are clothed with deep olive-black woolly hairs, and the males are shining stars with their bright bodies. Their body length reaches up to 7 centimeters with a leg span of about 17 to 22 centimeters. On those legs are irritant hairs that cause itching and burning on our skin and respiratory tract. Colombian Lesserblack is a lazy yet patient hunter, they simply wait at the entrance of their burrow at night for food. Who needs hunting when food walks past your door all the time like that, right?

Actually no, albeit the bite is quite painful. However, the pain is not what you should worry about because the bacterial infection from the bite is more dangerous. If one of these bites you, the wound must be disinfected as soon as possible.

Comes from the tropical rainforest of Colombia and Brazil, the leg span of these tarantulas can be from 15 to 25 centimeters. You can easily recognize them by their velvet black and red colors that somehow make them look so beautiful. This species is an extremely aggressive eater, and they eat crickets, small lizards, various mice, and other large insects. Yet for humans, they are fairly shy and they prefer running first and then showing a threat posture later. These spiders have urticating hairs that they tend to flick off as part of a defense mechanism.

No, they are not. And their bites are also harmless, and it is equivalent to a bee sting.

The giant huntsman is the largest spider by leg span with can reach up to 30 centimeters. Their legs are long, and those legs twist forward in a crab-like fashion. These spiders are not only large but also fast, and you can find them on walls in people’s houses. They can scurry up perfectly on smooth surfaces like window glass with ease. Giant huntsman often freaks people out because they usually play hide and seek and then appear behind curtains. If you are lucky, you may find them in bananas at the supermarket. The good thing about these creepy crawlies is that they eat insect pests like cockroaches, silverfish, and crickets.

No, they are not. They do bite humans sometimes but their bites are not dangerous at all although they can be quite painful. Since they don’t usually cause harm to humans, they are considered not dangerous.

This is the king of spiders; and of course, the largest spiders of them all by both mass and size. Their body length can be up to 12 centimeters while their leg span is up to 30 centimeters which is huge y’all. As the name suggests, these spiders are large enough to eat birds and they do eat birds just not too often. A Goliath has 2.5 centimeters long fangs, and its diet consists of insects, frogs, and rodents. These spiders have bad eyesight, so they rely on their modified leg hairs that are sensitive to vibration instead. With the help of their long fangs that act like hypodermic needles, the spiders can kill their prey easily.

Once they inject a neurotoxin into the hapless prey, the spider then drags the dying animal back to its burrow. They don’t spin webs to trap food, but they use their weaving skills to line their burrows under the forest floor.

Not really, their bite and venom are relatively harmless while the effects are comparable to those of a wasp’s sting. Tarantulas generally bite humans only in self-defense, and those bites rarely result in envenomation.