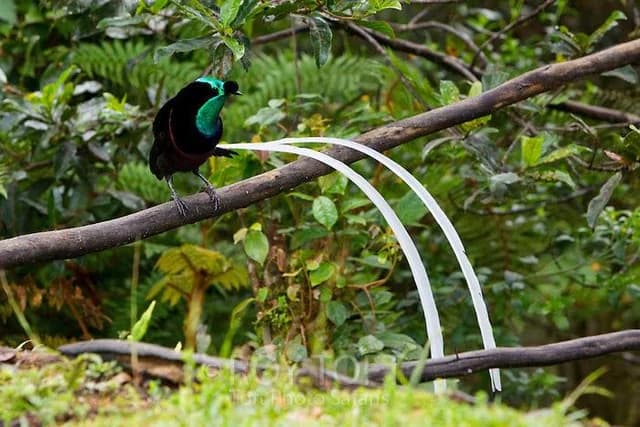 This little birdie here has a very small body while its tail can exceed as twice the length of its body. Long-tailed tits are one fascinating bird due to their distinctive coloring, tail, and undulating flight. These birds usually hang out in excitable flocks of about 20 birds; therefore, they are somehow always noisy. You can find them in deciduous and mixed woodland with well-developed shrubs, scrub heathland with scattered trees, bushes, and hedges. Their diet consists of insects, arthropods, eggs and larvae of moths and butterflies, and seeds based on different seasons.

Fun Fact: Long-tailed tits have their own calls and songs that they use during their feeding excursions.

Being the only lizard with such distinctive long tails, you can never confuse this species with any others. Early in the morning, they emerge to bask in the sun since they are entirely diurnal lizards. The interesting thing about them is that they will remain completely still at first if a potential predator approaches. Then they will quickly flee to the safety of foliage if the danger persists. Just like most lizards, they can drop their tail when attacked and then grow a new one. With such long tails, Asian grass lizards are also popular among pet enthusiasts as well.

Fun Fact: Both sexes use arm-waving gestures to communicate with each other.

The name already suggests the idea, and the tail of these weasels is usually more than half of the length of its body. Long-tailed weasels have a brown bushy tail with a black tip while their upper body is brown with yellowish-white underparts. If they live in northern areas, these weasels turn completely white in winter except for the tips of its nose, tail, and eyes. The color change is to camouflage and avoid predators like owls and hawks. Long-tailed weasels feed on a large number of small mammals and rodents like mice, chipmunks, shrews, prairie dogs, rabbits, etc.

Fun Fact: Their track has unique appearance because their hind legs fall exactly in the tracks of their front legs.

With history alongside humans, this macaque goes by many different reputations both good and bad. Being one of the animals with long tails, crab-eating macaques are one interesting primate. They have been seen as agricultural pests, sacred animals in some temples, and targets for medical experiments. Despite their names, crab-eating macaques do not consume crabs as their main food source at all. These primates are more opportunistic omnivores that feed on a variety of animals and plants. Since they inhabit subtropical and tropical forests, coastal lowland forests, deciduous and evergreen forests, mangroves, and swamps, the menu is wide. As for their long tails, they are very helpful when it comes to balancing as they move in the treetops.

Fun Fact: Crab-eating macaques use tools such as rocks to break crab shells, nuts, and oysters.

Remember King Julien from the animated movie Madagascar? Yup, he is a ring-tailed lemur. The ring-tailed lemur inhabits gallery forests and spiny scrubs in the southern regions of the island. They sunbathe in the mornings to warm themselves up, and they usually sit with their arms outstretched as if they are sun-worshipping. At the same time, ring-tailed lemurs are meticulously clean animals since they groom themselves using their comb-like teeth and claws every day. This lemurs species is now endangered in the wild, and they are used as a symbol for Madagascar. The threats to their population are habitat destruction and illegal hunting for their meat.

Fun Fact: The females are dominant, and they will feed and drink first if the food and water supplies are scarce.

Such an interesting name, spider monkeys got their name from their spider-like appearance when they hang their tails from a tree bow. Their tails are not only long but also very strong which they can even use as an extra arm. The monkeys usually use their tail to grip a branch while using both hands to gather fruit, how cool right? On top of that, they prefer to swing from limb to limb instead of leaping from tree to tree. Not to mention they can go great distances in a single swing, spider monkeys are one spectacular primates.

Fun Fact: Spider monkeys don’t have thumbs, they have four curved fingers that look like a hook instead.

Looking so majestic, the ribbon-tailed astrapia is known as the most recently discovered bird of paradise. Their species is distributed and endemic to subalpine forests in the western part of the central highlands of Papua New Guinea. Because of their beauty and scarcity, people hunt them for their plumes which leads to the decline of their population. Apart from hunting, habitat loss is also one of the reasons that they become threatened as well. Also, their long tail kind of makes it difficult for them to escape from natural predators in the wild.

Fun Fact: Only the male ribbon-tailed astrapia has a super long tail, the female’s tail length is only about 35 centimeters.