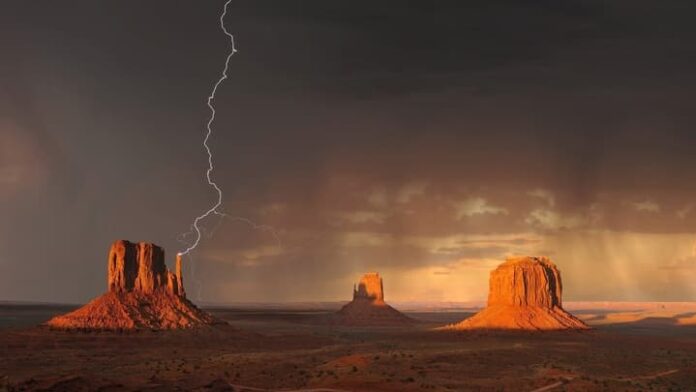 Cloud to cloud lightning is the discharge between areas of cloud without the discharge channel reaching the ground. That means it occurs between oppositely charged portions of the same cloud, but it also occurs between two different clouds sometimes. The good thing about this type of cloud is that it does not pose a threat to life and property on the ground. However, the danger rather concerns the safety of the aircraft that flies in the sky in the clouds.

As for cloud to ground, it takes place from the discharge between a thundercloud and the ground. Because it hits the ground, this type of lightning poses huge threats to life and property on earth. This lightning type strikes faster than we blink, and all we see is a flash while the destructive are large sometimes. About 2,000 people are killed by this type of lightning each year. For those who survived, they suffer from memory loss, dizziness, weakness, numbness, and other life-altering ailments.

It is more like the 4th type of lightning that is also known as Upward-Moving Lightning. GC is a discharge between cloud and ground initiated by an upward-moving leader originating from an object on the ground. This type of lightning is more common in tall towers and skyscrapers. The unique thing about it is that it can be either positive or negative in polarity.

This type of lightning is the most common type that occurs when there are both positive and negative charges within the same cloud. You can easily tell that it is the intracloud lightning because it usually takes place within the cloud. It looks like a bright flash of light that flickers, the ones that we always before and during rain. Sometimes you can see the flash of light without hearing any thunder, and that is the IC we’re talking about.

Apart from the main 4, we have many more types of lightning with different names for easier notice. The names of these lightnings distinguish the difference between each lightning by their appearance. That includes their color and their looks, so let’s see how many lightning types you know.

This type of lightning is the horizontal and tree-like lightning that most people can easily notice. Anvil crawlers usually cover very large distances just like branches of a tree in the sky. These lightning can either occur independently completely within the cloud or in connection with a cloud to ground discharge.

It is a rare phenomenon described as a floating and illuminated sphere that occurs during thunderstorms. Sometimes it moves fast while other times it is slow or stationary in one place. The lightning lasts from seconds to minutes, and disappears either slowly or suddenly with either a loud bang or quietly. Its rareness leaves a lot of questions, and the experts are still working on this type of lightning for more details.

Bead Lightning aka Chain Lightning is the type of lightning that appears as a string of luminous segments. Also, this lightning lasts longer than the usual disappear channel with its bright sections.

You can tell that lightning is a blue jet by the blue and cone-shaped burst that occurs above the center of the storm cloud. The lightning then moves upward at a high rate of speed. Most of the time, it emerges from the top of the thundercloud but not directly associated with CG lightning. Blue jets usually last a fraction of a second, and pilots are the common witnesses to this type of lightning.

Unique as it may sound, this type of lightning occurs with no apparent cloud close enough to produce one. This lightning can strike even if the storm is so far with flashes that begin as normal intracloud lightning flashes.

When a discharge jumps from a cloud into clear air, it will result in a cloud to air lightning. Such an event occurs when a long and bright lightning channel jumps out of the side of a cumulonimbus cloud. Then it terminates in the clear air surrounding the storm with a flash in which one end of a bidirectional leader exists the cloud.

Simple and easy, forked lightning is the lightning that divides into two or more parts near the ground. This type of lightning simply exhibits branching of its path is a large scale as much as it can cover.

This is the ordinary lightning that occurs from faraway thunderstorms below the horizon. You can see lightning flashes from a distant storm even from hundreds of miles away on a clear night. Also, you often see them on hot summer nights when thunderstorms are common. More than that, this type of lightning is like an early warning that storms are approaching.

It is the type of lightning that can appear directly above an active thunderstorm as a large but weak flash. The name suggests that the lightning is usually red in color, and it lasts no more than a few seconds. The interesting part is their shape which resembles a jellyfish every time they appear in the sky.

Ribbon lightning occurs in a thunderstorm with high cross winds and multiple return strokes. The strokes are separated by visible gaps which are caused by wind blowing the lightning channel sideways during the exposure. That means the stronger the wind, the broadened the appearance of the lightning.

Well, it is the normal lightning that is reflected in the clouds. This type of lightning occurs when the discharge of the actual lightning channel is either inside the clouds or below the horizon. It is like the lightning with its brightness diffused by reflection within clouds.

This is actually an informal term that describes a type of CG lightning strike that has no visible branching. The lightning also appears as a line with smooth curves as opposed to the jagged appearance of most lightning channels.

It is the cloud to ground lightning flash that consists of only one return stroke. This type of lightning often appears as a single flash that is very bright which can be found in rotating thunderstorms.

Just like the name suggests, it is the bolts of lightning that are a hundred times brighter than normal. The unique part of this lightning is that only one in a million lightning strikes is a super bolt. Such a rare case makes this type of lightning special while causing more curiosity among people.

The discharge of this lightning can appear in clusters when viewed from space. It is the tendency of lightning that travels across long distances which is as far apart as 100km.