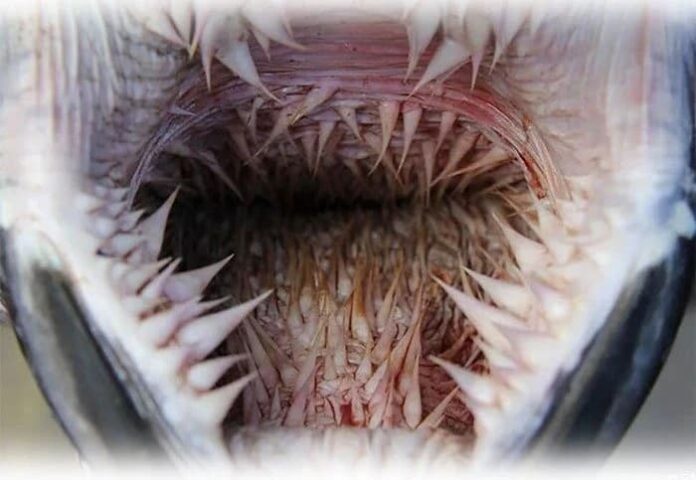 If you think that having 32 teeth is a lot, you might want to check out these toothiest animals first. For animals with the most teeth, the number of their teeth can go so unexpectedly high. The different thing is that not all of them use their teeth for biting or chewing like us. Weird, right? Some animals have rows of teeth that allow them to chomp on their food conveniently while the others use their teeth to make sounds. Let’s find out together and see what are the toothiest animals with the most teeth below.

When it comes to the toothiest mammal, the prize goes to this little cute animal in this disguise here. An opossum has up to 50 pointy teeth that they rarely use to bite since they are not aggressive. Normally, they would often gape their mouths open to expose those teeth when they are threatened. The longer you look at them, the more silly they become because they will just stand there with their mouths open. Even if you put your finger in their mouth, they still won’t bite. The purpose of showing their sharp teeth is to hope that any aggressors will back off at the sight of their intimidating teeth.

The opossums also have another defense mechanism which is to play dead, and they can do it for up to 4 hours. On a daily basis, these marsupials eat pretty much anything they can find from regular food to garbage and carrion. Since they are scavengers, they have an excellent immune system and great adaptability they protect them from diseases. The question is what do they use their teeth for if they don’t bite to protect themselves. When feeding, opossums use their teeth to rip and grind their food. To cut things short, opossums are eaters, not fighters which is why their large canines are for bluff display towards predators only.

There are two types of whales: baleen whales and Odontoceti whales aka toothed whales. The latter has rows of teeth and sperm whales are the largest of them all. The lower jaw of a sperm whale is very narrow and underslung, and there are between 18 to 26 teeth on each side. When the whale closes its mouth, the teeth will slot into corresponding indentations in the upper jaw for a comfortable fit. The teeth of a sperm whale are cone-shaped, and each of them weighs up to 1 kilogram. Despite the fact that they have large and heavy teeth, they don’t use them for chewing or biting at all. Sometimes they use their teeth to grab and tear the prey like squid but they prefer to swallow their meal whole.

The giant armadillo is the largest armadillo species, and they have up to a dozen or more hinged bands to protect its body. These armadillos can have from 80 to 100 teeth, and their teeth are all similar in appearance. Despite having many teeth that grow constantly throughout their life, giant armadillos feed mainly on termites and ants. The interesting thing is that they are capable of consuming the entire population of the colony in a single feeding session. Plus with their large claws, they are able to demolish even the hard-baked termite mounds in just minutes.

Giant armadillos inhabit areas with high termite populations around rainforests (both tropical and subtropical), floodplains, grasslands, semi-arid, and arid woodlands. They are nocturnal so they spend most of their day inside burrows since they are active mostly at night. Unlike some other species of armadillo, this one cannot roll into a ball to protect itself from attack at all. Instead, it will try to flee or dig itself into a burrow in which to hide. When cornered, it will raise itself on its hind legs using support from its tail and extend its front claws, ready to attack.

With their size, a single giant armadillo supplies a great deal of meat which is why people hunt them. These armadillos are also the primary source of protein for some indigenous people as well. In some other cases, people captured them for trade on the black market and they usually die during transportation or captivity. Giant armadillo is not classified as vulnerable, and there is mitigation to reduce the threat of habitat loss and population decline.

Barracuda is a saltwater fish that is known for its fearsome appearance and fierce behavior, and of course, their teeth. This type of fish has prominent and sharp-edged fang-like teeth just like piranha. The teeth in their mouth come in all sizes, there are two rows of them and each of which is razor sharp. In total, both lower and upper jaws are filled with dozens of teeth that can snap your fingers off anytime.

The scary part is that some of the teeth point backward in order to prevent slippery fish from escaping. If the fish is small, the barracudas will swallow them whole. As for larger fish, the teeth will do the chopping part to make feeding easier and more convenient. In case you want to look for them, you can find them in tropical and subtropic oceans worldwide. They reside near the top of the water and near coral reefs as well as sea grasses. Good luck!

Most dolphins have 96 teeth, but spinner dolphins can have as many as 252 teeth in their long thin jaws. The unique thing about them is that they do not use their teeth for chewing or biting at all. Spinner dolphins only use their teeth to emit sound for communication or echolocation which is in form of click-whistles and pulse sounds. In feeding, they prefer to swallow their food in a single gulp which requires no teeth at all. Their diet consists of fish, jellyfish, krill, squid, shell-less snails, and copepods.

The unique thing about sharks is that they have rows of teeth, and each row can be up to 50 or more. Their teeth row is organized one after another, and both their upper and lower jaws can have from a few to 15 rows. You do the math. The thing is that shark teeth don’t have roots so they break off easily, and may last as little as a week. The cool part is the new teeth can move forward to replace lost teeth within a day or a few weeks. How cool is that, right?

In a total of lost teeth and new teeth growing, a shark can have up to 20,000 teeth throughout its life. A list of the toothiest animals would be incomplete without sharks, right? There are four types of shark teeth including dense flattened, needle-like, pointed lower with triangular upper, and non-functional. Each type of tooth that a shark has depends on its diet and feeding habits. No matter what type, they still lose their teeth every time they bite into their meal at the end of the day. In Oceania and America, people commonly used shark teeth for tools especially on weapons such as clubs and daggers. Shark teeth also cost quite a price as well since there are always people who want to buy them.