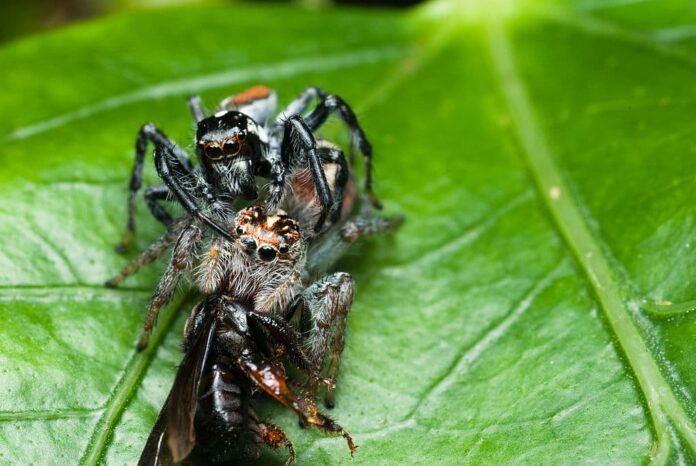 Rumors go around, it is true that black widows eat their mates but it is not so often. The dangerous thing is that the males have to place themselves between the female’s fangs to get in the “right” position. You know females get hungry easily, so sometimes they want little bites on their lovers after mating. The interesting part is that not “all” female black widows are the same which is why some males are still alive after mating. There are three known black widow species in North America, and only one occasionally demonstrates the hard-core mating aftermath.

It is never easy to get the girl, and that goes everywhere, especially in the spider kingdom. Romeo always goes through a lot of processes from deception to cannibalism and dancing just to get Juliet. When a male jumping spider encounters a female – literally any female – he launches into an elaborate courtship dance. Some results in the attack of the females which leads the males to run for their lives.

However, some males come back and the attack turns into successful courtships which leads to mating between the two. In case the male is unfortunate, they would become dinner instead of getting laid. If the male seals the deal before becoming the meal, the dude will get to mate. And if they don’t run fast enough after mating, they will be the snacks. Either way, female jumping spiders are pretty dangerous to date.

Love can break your heart, or your head if you are a male praying mantis. It all begins with the female who attracts the male to engage in the mating process with her. If the male is deemed worthy, well he will be lucky enough to get laid. That is when the horror begins. The she-mantis simply chews off her partner’s head after or even during the mating. Then she drops his headless body on the ground. In some cases, she eats everything; either way is cruel.

The thing is that the male’s sacrifice actually provides a distinct reproductive advantage to the offspring. The females who ate their partner produce more eggs than those who did not. According to the research, cannibalistic females produce about 88 eggs on average while it is only about 37 for regular females. Also, the males who survive their deadly mating can potentially reproduce multiple times. After all, it is a win-win for both.

Male redback spiders are clever for some reasons especially when they seek to mate with immature females. When the females are immature, it means they don’t have the experience of eating their males. That means our guys have a higher chance of survival after mating which is a good thing. The thing is that male redback can only mate twice in his life, and that is it.

The first time he would seek an immature female because she would be too tired to eat him after mating. The second time, the male would mate with an adult female redback while throwing himself into her jaws. Doing so is to slow down the mating process in order to increase the male’s chance of paternity. No matter what, the males will always end up being eaten by the females eventually. Well, it is not a surprise since the females are way larger and heavier than the males. Hungry for more than love? Yup, eat then your lover alive!

Love is a wild and weird thing that you cannot explain. As for sagebrush crickets, a relationship means to sacrifice. Literally. So the males permit females to engage in an unusual form of sexual cannibalism during copulation. Basically, the females feed on the males’ fleshy hind wings and ingest hemolymph (a fluid equivalent to blood) oozing from the wounds.

In case you feel bad for the males, don’t worry. These wounds are not fatal, and they are only a portion of the hind wings eaten only at any one mating. Then, he can continue to mate with other females with fewer things to offer which is a whole lot better than being eaten whole.

Playing hard to get, the female scorpion usually pushes the male away when he tries to seek her pincers; literally. Scorpions engage in a complex courtship ritual known as “Promenade a Deux”. That is a kind of dance that involves the male grabbing the female’s pincers with his own. He then will lead his dancing partner around as he searches for a suitable spot to deposit the sperm packet. So much for true love, right?

No doubt why the females sometimes resist the male’s smooth moves by refusing to dance. That comes in various ways including pushing him away or even trying to sting him. Then the male may try to appease her with a kiss in which is grasps her chelicerae (pincer-like mouthparts) with his own. When everything is done, the pair halts their dance and goes their separate ways.

I know what you are waiting for, the females do attack and eat the males in case of population regulation. That is when they live in high densities and potentially see each other as prey. Female scorpions often kill the males after mating is over by injecting them with a series of lethal stings. Then she devours the males after mating while some other times she eats the males even before mating.

With black and yellow stripes, you can never mistake wasp spiders for any other species. The males are usually 2 or 3 times smaller than the females, and that makes cannibalism even easier for the females. So the males are able to enter into the female’s orb without being detected as prey by the females.

During mating, the male is generally cocooned, killed, and eaten by the female. However, a second before that, the male already breaks off his sexual organ so the female won’t mate with anyone else. He is going to be the dinner anyway, so why not make the mating the first and the last for the female, right?