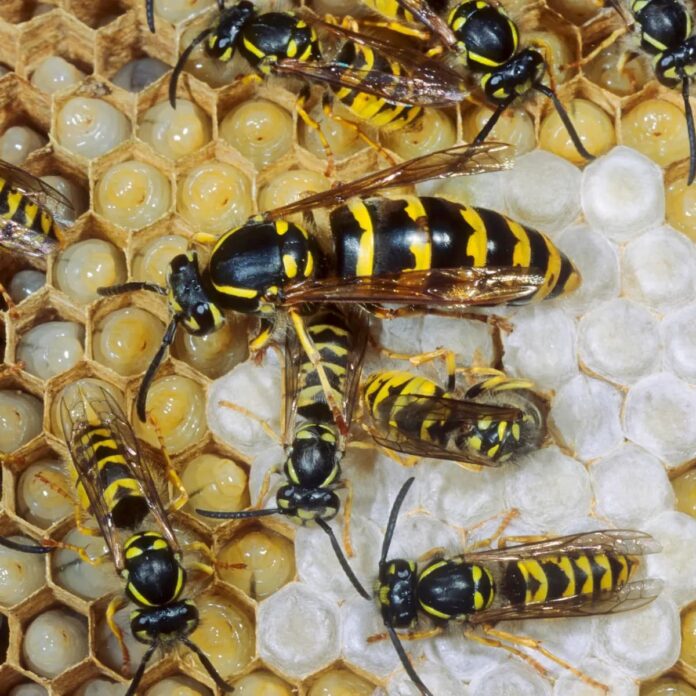 With the mention of the Queen, people often think about the Queen of England. Yet further into the animal Kingdom, there are 4 colonies of animals that also serve the queen. Each colony has a queen for reproduction, and the members are divided into workers and soldiers. This whole thing is known as Eusociality, and usually the life of most insects goes with this term. There are 3 main features of Eusociality:

At the same time, everyone in the colony does everything and whatever it takes to protect their queens. As a matter of fact, none of them would exist without the presence of the queens. She starts the colonies, she is the mother of everyone in the colonies, and most importantly, she is the chosen one. When you are born a royal blood in the animal kingdom, there is no going back. Take a look at our supreme females of the insect kingdoms and see which one is the most interesting.

Unbelievable as it may sound, there is a high chance a member of royalty is living in your house. Yup, we are talking about queen ant and all of her children that swarm your food and drinks. If there is a colony living in your house or garden, there is definitely a queen in that colony. Just like other queens, the job of ant queens is to make sure that their colonies thrive. Generally, there are 3 castes within an ant colony which include queens, workers, and males. Each of them has their own role to keep the whole colony and their large population surviving.

Worker ants are wingless and sterile female ants, and they are the ones you always see around your food. The worker ants are the smallest in the colony, yet they do the most work. Some of them look after the queen and brood while others forage for food from around the nest. Worker ants also find food to feed the colony while maintaining and expanding the nest. In case the queen dies, worker ants can lay a fertilized egg which will become a drone ant.

Speaking of drones, they are the male ants whose job is to mate with the future queen. Sounds like a cool job, but drone ants usually die after mating with the queen. The interesting thing is that drones can also mate with existing queens by entering a foreign colony. It is like they have a cool pass for being a drone, they can go from colony to mate with queens. After mating, the drones die and the queen will seek a suitable place to begin a colony.

After finding a perfect place, the queens will break off their wings and begin to lay and care for eggs. She can selectively fertilize future eggs with the sperm she stored to produce workers and drones. First-worker ants are normally weaker and smaller than the later workers, but they serve the colony the moment they hatch. In some species, there are queens who leave the nest along with some workers to begin a new colony. It is a big world, after all, ant queens can always rule.

We have always heard and probably used the word Queen Bee so many times. In the Bee Kingdom, things are slightly different. The term queen bee refers to an adult and mated female that lives in a hive, the bee colony. All queens developed from larvae selected by worker bees and specially fed in order to become sexually mature. Queen bee is the largest and longest-living bee in the bee’s world, and she can survive up to six years.

Normally, there is one adult and a mated queen in a hive along with thousands of the queen’s entourages. After mating, the queen will lay eggs all day long to expand her colony with generations of bees. The cool thing is that queen bees also produce chemicals to influence the behavior of the other types of bees.

Just like ant queens, queen bees have workers who are all female to find food and take care of them. The colony also consists of drone bees that are larger than worker bees yet smaller than the queen bee. Life is luxurious for the drones since their only task is to eat and mate with the queen. Unfortunately, the life of drones is short since they die as soon as they mate with the queen.

Although a queen bee stays fertile for her entire life, her productivity often declines as she becomes old. There are times when the queen dies or goes missing from the hive, and that is when the colony needs a new queen. The workers will follow the same process by feeding selected larva with royal jelly to turn her into a queen. The bizarre thing is that the worker bees may kill the queen if the old queen bee is no longer useful. Or in a nicer case scenario, they may let her live alongside the new queen until she dies naturally.

Not all queens are beautiful, and a termite queen is the perfect example of one. This scary-looking picture depicts the termite queen and her workers. Not different from other queens, the queen of termites is responsible for laying eggs to sustain her colony’s growth and survival. There is also a caste system in the termite’s kingdom which includes the king and queen, soldiers, and workers.

Yes, you read it right. Termites have a king and queen in their colony which is different from the other 3 kingdoms which only have a queen. The king and queen termites are the only fertile termites in the colony, and they mate for life. Both of them have wings before they leave their parent colony to start their own colony. Once they found a perfect place, they will shed their wings and begin reproducing.

Usually, the royal couple picks a nesting site that includes plenty of moisture and decaying wood to serve as food. That makes it easy for everyone to have food to eat right away the moment their colony begins to grow. Once they settle, the queen starts to lay eggs and take care of her larvae together with the king. Together, the size of their colony gets bigger and bigger in just a few months.

The fascinating thing is that the queen lays an egg every 15 seconds which equals thousands of eggs per year. Her egg production is slow at first, but increases year by year. A termite queen can live for 15 to 25 years, and some queens can even live as long as 50 years. As she gets older, she will have her neotenic to assist her in reproduction. One of those neotenic will become the new queen as soon as the current queen dies.

A wasp is already a representation of a nightmare, let alone seeing the queen wasp with its unbelievably huge size. Just like the 3 other queens above, the queen wasp is the leader of the nest with the main role of laying eggs. A queen wasp is the largest in the colony, and her is narrow-waisted with a pointy abdomen. The color of a queen wasp can be brown, metallic blue, red, or yellow. She is also the strongest since she has the ability to survive through winter.

After her hibernation during spring, the queen will choose a suitable area to build her nest. Her favorite spots would be a hollow tree or in the cavity of a building. Another thing that you should know about a queen wasp is that she is a very skillful builder. She constructs her nest by using paper which she creates by chewing up the wood. When the construction has finished, the queen will lay eggs which will hatch in about a month.

Fun Fact: Only female wasps including the queens have stingers which they use solely for self-defense.