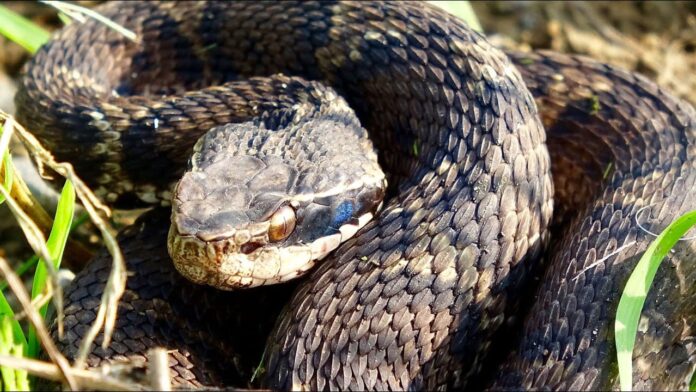 Things won’t get any better even if your favorite anime character reads it in a kawaii voice after seeing this photo. Ashidaka Gumo means “tall-legged spider”, and of course, the nightmare to us all. With that size and that look, these are already a curse to see; let alone encounter one. Their official English name is Huntsman Spider, and they can grow up with a leg span of 30 centimeters. Being big and scary-looking is not enough, these things are also incredibly fast as well.

The unique thing about our friend/nightmare here is that they don’t spin webs to catch prey. Like why bother spinning webs when they are so fast and their preys are too big for the web? They use their lightning-fast legs to chase down their meal such as cockroaches, cicadas, and small reptiles. When they do not present themselves as guests in your home, they tend to live under rocks, bark, and similar shelters. Should you are bitten by one, the effects would be local swelling and pain, nausea, headache, vomiting, and irregular pulse rate. The advice would be “stay away” when you see a creature with long legs like this, they’re not cuddly.

At first glance, this is a perfect image of a cute caterpie that resembles a Pokemon character, Charjabug. They are so adorable, but you will stop that thought the moment you touch them. If you cannot resist their cuteness and the curiosity of patting them, you will know what it feels like to be electrocuted. That explains the name Denkimushi which literally means Electric Bug in English. No, the way they shock you is not like the way electric eels do. When handled or threatened, this caterpie releases chemicals that sting like an electric shock. To cut things short, Denkimushi is nice for the eyes to see but not pleasant for the hands to touch.

Suzumebachi, or I would prefer to call “Hornet from Hell”, are massive insects gifted with 6.25 millimeters of stingers from Satan. These nightmares can grow up to 4 centimeters, and of course, larger than that with a wingspan of 6 centimeters. You can never confuse them with any other insects, these hornets have a large yellow heads with large eyes. Speaking of eyes, they have 3 small simple eyes on the top of their head along with two large compound eyes. At this point, I wonder what Mother Earth was thinking when she created this thing.

The stinger of these hornets from hell surely causes a lot of pain, and their venom is extremely potent. Their venom attacks our nervous system which causes extreme damage to our tissue, and simply leads to fatalities. No matter if you are allergic to the venom or not, the chance of getting killed by them is always high. It is just worse for those who are allergic since the sting from them can cause anaphylactic shock.

Also, don’t even think of provoking them because these Satan’s spawns are incredibly aggressive. They will look for you, chase you down, and attack you. Just a friendly info, some of them sting you once while the others sting you up to 10 or 30 times. Plus, they might gather their clique and attack you as a group as well. That my friend, is when you need to find a nearby hospital immediately. Suzumebachi kills between 30 to 40 people in Japan each year, please don’t be one of the victims.

In case you want to find them, there are some places that you can go look. These insects like to nest under trees, eaves, and roofs, and sometimes they nest under tree roots. Also, they prefer rural areas which are somehow bad news for hikers who love beautiful gardens. At the same time, bear in mind that the likeliness of you encountering these lovely fellas are during warmer seasons. Another thing is that they tend to be very aggressive during breeding seasons which are between September and October.

Leeches are already fearsome, let alone the ones that can somersault after you on land like this one. Looks like Japan is not advanced in just their robots and technologies, but their dangerous animals are also from the future. These ninja leeches have 5 pairs of eyes, and they have from two to three jaws for the comfort of feasting on you. The jaws are not the problem, the problem is the thousands of small teeth that suck blood the hell out of you.
I did mention somersault, and yes they don’t have to wait for you to get into the water.

These legless monsters can follow you at high speeds on land and suck you anytime they want; in a not dirty way. I don’t know which master trained them, but these things can even climb trees to fall on you. The worse part is that they can suck your blood without you knowing; their jaws numb you that’s why. I have one last note though, they can chew their way through your clothes so dressing like an Eskimo won’t help.

Goes by many names, these are the spiders that you can easily notice with their black and yellow color patterns. Also, you will usually see them hanging from their webs with their legs in an X formation. They don’t do that to look cool, they are waiting for prey when they do like that. Yet at the same time, they like to dangle from their cool webs that span with their evenly distributed legs. You only find them and their webs on overhanging roofs in the countryside of Japan.

However, the thing is that there is a chance you literally face their web while hiking. Roofs are not their only favorite places to weave their webs. These crawlies live almost exclusively outdoors, and their webs are super sticky. As for their venom, it is potent but not necessarily lethal to humans, unless you are allergic to insect or arthropod bites. If bitten, the victim would be likely to feel localized pain and redness with blisters forming. On a side note, just be careful especially when you go hiking.

There are 3 species of venomous snakes in Japan including the Japanese keelback, the habu, and mamushi. So why are we talking about just one? It is not because of the name is kawaii, it is because Mamushi is Japan’s most dangerous snake. On top of that, they are also the most common snakes in Japan as well. Mamushi is a pit viper with the resemblance of a copperhead, and the combination of these two is not pretty.

Adult Mamushi usually reaches a length of about 28 to 68 centimeters, and the longest one was 91 centimeters long. These snakes have a moderately thick body with a short tapering tail which is somehow easy to notice. As for their coloration, it consists of reddish-brown, pale gray, or yellow-brown background covered with a number of dark blotches. However, always run in the opposite direction if you see a snake though.

Where Do They Live?

You can find the Mamushi in a variety of habitats, yeah sadly they are everywhere. From woodland, meadows, swamps, marshes, and rocky hillsides to montane rock outcroppings, there is a high chance you see one. They hunt both day and night, and their heat-sensitive glands allow them to locate prey in the dark. The good news is that they are shy (aww), and usually avoid human contact. They only bite when people try to handle them, or worse, accidentally step on them.

Yet if they do bite, things can get pretty ugly. Mamushi doesn’t get the reputation of being one of the most dangerous animals in Japan and the most venomous snakes for nothing. Their bites cause tissues to liquefy, or in an easier term to understand, to melt. Mamushi bit between 2000 to 3000 people every year, and victims usually require one week of treatment in the hospital. Just one week, you may ask. Nope. A week of hospitalization followed by another 4 weeks of outpatient treatment, and several months to a full recovery.

Meaning Giant Centipede in English, Mukade is definitely the creepy crawlies that many of us are feared of. These leggies symbolize evil in Japanese mythology, but things are not any different in reality. They can grow as long as 38 centimeters or even longer, and they feed on insects, snails, worms, and even arachnids. Mukade does not eat you, but its bites can definitely cause severe swelling or even death to those who are allergic to toxins.

Let’s get to the horrifying stuff where you may find them in your shoes, toilets, bed linens, etc. Sometimes they crawl up to you in your sleep, and their favorite parts of your body are ears or noses. While other times, they want to get kinky so they sit on the ceiling and fall down on you. Surprise! The even worse part is that these leggies are very hard to kill, bug spray feels like perfume to them. There are two ways though, you can either shower them with boiling water or burn them. The choice is yours.

Note: Japanese Giant Centipedes are abundant in the rainy season which is from June to August. Now you know when to shake your shoes and every single thing in the room during your trip.