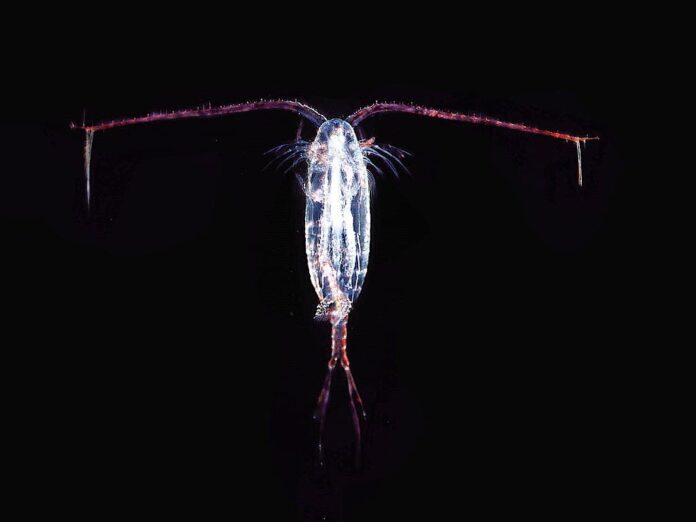 Have you ever wondered if there are animals with one eye out there? Actually, there is one species of animal that has one eye. Copepods (pronounce kho-pi-pods) are a group of small crustaceans that you can find in nearly every freshwater and saltwater. As a matter of fact, where there is water, there are copepods. There are 10 orders of copepods and over 13,500 species of them live and swim in the water. Among those, 2,800 of them live in freshwater.

Most copepods have a single naupliar eye in the middle of their head, and they are the only animals with one eye. Pretty unique and fascinating, aren’t they? A majority of them have a single median compound eye, usually bright red and in the center of their transparent head. However, copepods of the genus Corycaeus have two large cuticular lenses which are different from their family member. As for the subterranean species of copepod, they are eyeless. So basically, copepods are a bit of everything.

Copepods are very helpful since they keep our oceans and waters clean by eating algae, bacteria, and dead matter. Copepods also feed on mosquito larvae which helps control malaria and other mosquito-borne diseases. At the same time, these cyclops are also very important in the food web as well since many animals eat them. According to the studies, copepods may be the most abundant single species of animal on earth. And they are very useful in both the way they eat and are eaten.

These crustaceans are part of an important ecological group known as filter feeders which feed on floating particles. Among others, this group includes copepods, jellyfish, and mollusks that can filter almost 3 gallons of water in an hour. Without their filtration, there would be an overgrowth of plankton that deprived the water of oxygen. That would kill other aquatic bay animals, and the water and oceans won’t be as clean.

Apart from the fact that they are unique animals with one eye, they are also very helpful in our nature. They are the single most important group of animal plankton, and we need them in the waters. From filtering the water to preventing mosquito-borne diseases, they have been helping us a lot. Don’t forget to share the knowledge about this awesome cyclops with people you know, copepods are super awesome!