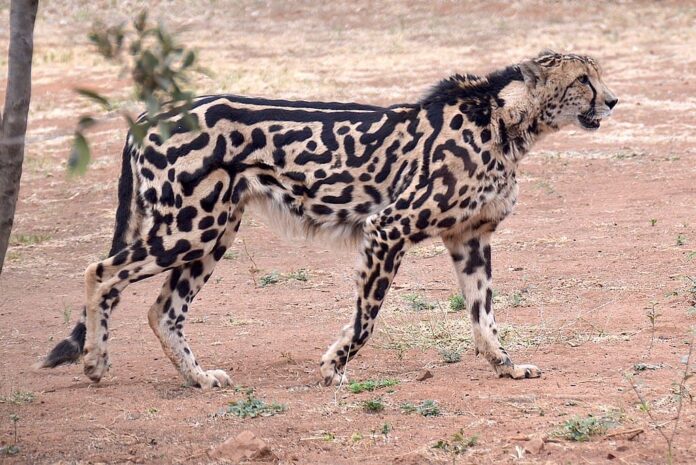 Some are born to be kings, and king cheetahs are exactly one of them. King cheetah is a very rare variety of cheetahs, and they have been seen in the wild only 6 times. This cheetah species is so rare there are only about 10 of them in wild, and about 50 in captivity. The unique thing about them is their rare fur pattern mutation that makes them look different and powerful. There are a few things that we should know about this rare species, so let’s take a look.

With a large chest, narrow waist, long thin legs, and a slim well muscled build, king cheetahs are true beauty. Their body is also built for speed as well, they can reach the speed of 112 kph. These large cats have non-retractable claws and tough pads on their feet that aid them in getting to their great speed. As for their long heavy tail, it acts as a rudder for making those sharp turns while in pursuit. Plus with their amazing eyesight, king cheetahs are one incredible animal.

The king cheetah has stripes and spots that differ from the common cheetahs. Such stripes and spots are caused by a single recessive gene that creates the funky fur pattern. With a rare mutation, the king cheetahs have large, blotchy spots, and three dark wide stripes extending from their neck to their tail. And that is what makes them look different and majestic than other cheetahs out there. They also have some smaller spots on their legs and faces as well, and that is what makes them different.

More than that, the king cheetah has a mutation that exhibits longer and softer fur compared to the typical species. Also, their fur is also much thicker just like the fur of snow leopards. Cheetahs usually have hoarse thin hair for surviving in hot arid environments, so this mutation helps king cheetahs a lot. The cool part is the tear marks that run from the inside corners of their eyes down to the outside edges of their mouths. Both parents must be both king cheetahs to make a king cheetah cub.

King cheetahs rule Africa, and they were first discovered in Zimbabwe in 1926. Their habitats range in the northern part of South Africa’s Transvaal province, Zimbabwe, and Botswana. Not different from other regular cheetahs, the kings also prefer to live in the savannah as well. Apart from that, they are found in open grasslands which is the type of habitat that is suitable for their hunting. These incredible runners need open areas to capture their prey that’s why.

Just like common cheetahs, the king cheetahs are carnivores and they prey on a variety of animals. These fast runners hunt during the day, and they eat their prey right at the spot where they kill them. Their menu consists of a wide range from small animals to larger ones such as rabbits, duikers, wildebeests, steenbok, impala, springbok, oryx, and more. An average cheetah consumes about 6 to 8 pounds of food each day, and they occasionally go without water for up to 4 days.

King cheetahs are one of the apex predators, so they don’t have any other threat besides us humans. Their population is very small, and it is all from human activities. Their main threat is habitat loss due to industrial and agricultural expansion. Other human activities that also pose threats to them are interference with the feeding and hunting habitats of the cheetahs. Seeing them in the wild is so rare. So if you want to see one, you can find one at the wildlife center in South Africa.