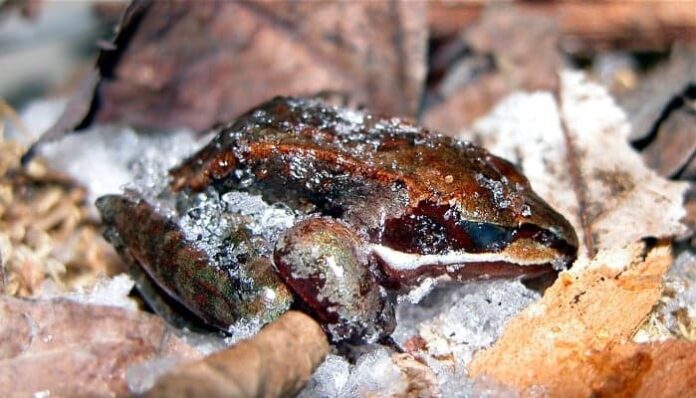 Hibernate is an adaption that helps many animals to conserve energy by remaining inactive by slowing their metabolism and reducing body temperatures. Animals that hibernate stay in their den, burrows, or shelter for weeks or even months at a time. There are certain animals that involve in hibernation because food is always so scarce for them in winter. This adaption to harsh climates often relates to long periods of sleep and less energy usage.

There is another hibernating process called Torpor which is the same thing but with a shorter duration. For some other animals, they have food storage for winter so they don’t go out which is a more comfortable way to survive. Winter is around the corner, it is just the right time to see who stays in one place during cold days. We have 10 interesting animals that hibernate in the list below, so check them out.

When it comes to animals that hibernate, bears are the most common ones that many people know about. As a matter of fact, bears aren’t true hibernators since they are more like light hibernators instead. That is because they are in the torpor process due to the fact that they are easily awoken.

Bears go into torpor during winter months only if they live in cold areas. There are only 4 species of bear that are hibernators including the American Black Bear, Asiatic Black Bear, Brown Bear, and Polar Bear. During the process, they don’t eat or drink for about 6 months on average, and they rarely urinate or defecate. As for a pregnant bear, she can also give birth and nurse her cubs during the hibernating period as well.

Mama bears will wake up in January or February to give birth to their new cubs. The babies and the moms will stay in the dens until mama bears can take them out on their first adventure. When the bears come out of their dens once again, they will feed on the animals that didn’t survive winter. They will also hunt other animals along with berries, insects, and nuts. As for those who live near water, salmon will be their daily meal.

Of all bee species, honeybees are the only species that do not actually hibernate in winter. They simply stick together as a group and survive on food they have collected over the summer. This process is somehow different from the definition of hibernating. However, ground bees and bumblebees will hibernate when winter comes. In fact, most bees in a colony will die off but the queen hibernates to start a new group in spring.

The queen bee will dig into the soil on the side of a north-facing bank to avoid the winter sun. She will then stay there until spring arrives. In case you wonder, there is no need for the queen to eat while she is in hibernation. That is because she will fill up on pollen during the spring and summer months. Then she will be plump enough to go to sleep and stay healthy for the entire period of hibernation.

These are the large lizards that are one of the only two venomous lizards in the world. As an adaptation to their harsh desert environment, Gila monsters spend a large proportion of their time underground in burrows. When it gets cold from November to February, Gila monsters go into hibernation until the weather gets warm again. So basically, they hibernate during winter and shelter from the midday sun in the summer months.

These are one of the most famous animals that hibernate due to their unique way of hibernating. The hibernation period of groundhogs can last between a couple of months to nearly five months. During this time, their heart rates go from 80-100 beats per minute to only 5-10. Once it’s November, Penn State researchers estimate that these furry creatures drop their body temperature to about 38 degrees. Then they sleep in their burrows until around late April or early May.

These little cuties are one of the animals that hibernate in winter, and you are likely to find them around. Ladybugs love to hibernate in a warm and comfortable spot over the cold months of winter. So, they gather in groups when they hibernate which can be up to hundreds or thousands at a time. Ladybugs hibernate in different places like under tree bark, under leaf litter, under rocks, or even inside houses. Don’t freak out if you see a lot of ladybugs at home in winter, that’s a sign that your house is warm.

Skunks enter a state of torpor which is a short-term hibernation that lasts for a couple of weeks. The thing is that they can lower their metabolism and conserve energy as needed. Skunks actually do not hibernate, but they generally remain inactive during winter surviving on their food stores.

In some cases, they may also leave their winter den at least once for short periods during warm weather. That is to empty their scent gland as well as to look for food while they are out. When live food is available, skunks feed on insects, earthworms, eggs, frogs, snakes, and other small animals. If not, they will scrounge for fruit like berries, roots, leaves, grasses, and nuts.

Not all snails hibernate, but it is super cool when they do. Snails can hibernate any time when the weather is extreme, and that includes both hot and cold temperatures. During the hibernating process, snails cover themselves in a thin mucus that protects them from the elements of the environment. That mucus also prevents them from drying out while they hibernate as well. That is when you see a snail hiding in their shell resting on a leaf without moving forward in the daytime.

Almost all snakes have to go through hibernation in winter with a duration depending on the location that they live in. For example, a snake in Minnesota might hibernate for months while one in southern Texas hibernates for a couple of weeks. However, snakes don’t actually hibernate since the term for their hibernation is brumate which means the same thing.

During the cold months, snakes will look for a well-insulated hideout where they can bide their time. That is when they will use no energy until the weather is warm enough for them to move on. On some occasions, snakes will brumate in large piles which is somehow not a pleasant scene to come across with.

As temperature drops, turtles need to hibernate because they cannot produce their own body heat. The hibernating process varies from one turtle species to another, but it is common for box turtles to hibernate for 3-4 months. Freshwater turtles hibernate in water where their body temperatures will stay relatively stable and won’t go below freezing.

When turtles hibernate, they rely on stored energy and uptake oxygen from the pond water by moving it across body surfaces. That way, they can get enough oxygen to support their minimal needs without using their lungs. They breathe through their butts tho.

If you find a frog that looks like it might be dead in late winter or early spring, don’t get close. The frog you see might be a wood frog that is hibernating in a way that makes you think it is dead. The hibernation process of a wood frog is very interesting because their hearts actually stop beating. While there are tiny little ice crystals start to form in the blood. Everything goes back to normal when the weather warms up and the heart starts beating again.