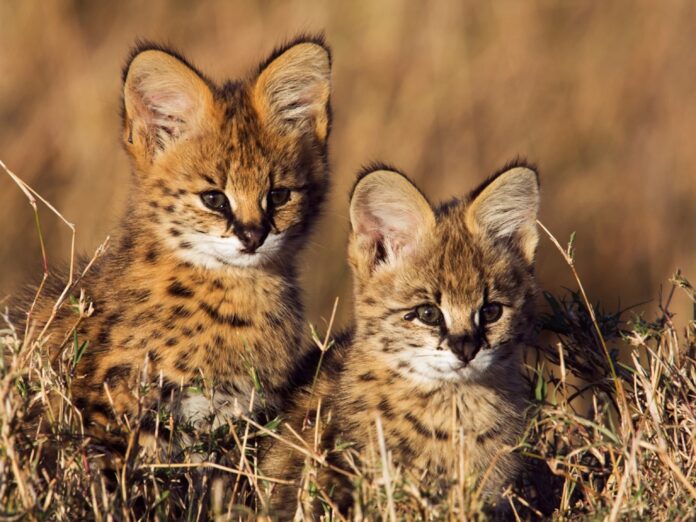 Dangerous but beautiful, wild cats are among the rare beauty that not many people notice. We are not talking about tigers or lions, beautiful wild cats are fluffy and fierce-looking creatures in the wild. It is true that we don’t see them so often, and we usually think that big cats are dangerous. In case you want to see some beautiful wild cats that will capture your heart, we have 10 of them. Below is a list of rare and majestic-looking wild cats that you will surely love, let’s take a look.

Not every cat smiles so often, and so does this one. African Wild Cat is an indigenous species of wild cats of Africa. In fact, they are the ancestors of the domestic cat that we have nowadays. People believed that Egyptians were the ones who tamed them since over 4000 years ago to control mice raiding their granaries. These cats are widespread throughout Africa but absent from the tropical rainforest and Sahara desert.

This cat species is generally solitary except when mating or when a female is raising kittens. Both of them are very territorial since they establish territories that they mark and defend against intruders. These cats are active mainly by night, and their preys are mice, rats, birds, reptiles, and insects. As for their predators are foxes, wolves, other cats, and larger birds like owls, eagles, and hawks.

We always hear people saying “Don’t judge a book by its cover”, and it is actually true. The perfect example is a black-footed cat because these little fluffy creatures are vicious hunters. These cats can jump to snatch a bird as it is flying, and they are nocturnal hunters which are more active at night.

You can only find them in 3 countries in southern Africa including Botswana, Namibia, and South Africa. Black-footed cats live in medium-length grass plains, scrub deserts, and sand plains like Kalahari and Karoo Deserts. They usually shelter during the heat of the day in abandoned termite mounds or burrows before they start hunting.

These adorable but fierce cats are now in a vulnerable class due to many various threats to their population. Those include poison baits and traps, poisoning locusts, loss of grassland, habitat deterioration, and more.

This adorable species is now in the principal threats class since people killed them for livestock predation. More than that, some even hunt them for their skin and meat for those who considered them luxury. Back in the 13th and 14th centuries, Chinese emperors used Caracals as gifts in return for gold, silver, cash, and silk. Their population is now not in a good image, perhaps they might be extinct soon.

When it comes to beautiful wild cats, these are the ones that you should see. Canadian Lynx is a medium-sized cat that we can recognize by its long ear tufts, flared facial ruff, and short bobbed tail. If you look closely, you can tell that these cats have very large front paws which is somehow unusual.

These large paws are like snowshoes in very deep snow while the thick fur on their long legs keeps them warm. The hind legs of these wild cats are longer than their fronts which gives them a stopped appearance. The appearance of Canadian Lynx is to make it easy for them to hunt in deep snow with ease.

You can find them in forested areas in their dens underneath fallen trees, tree stumps, rock ledges, or thick bushes. These wild cats are very territorial animals, and males usually live alone and only come around the others during the breeding season. They hunt at night, and their big eyes and superior hearing enable them to hunt very easily. Their main meal is snowshoe hares along with small mammals, birds, and sometimes large animals like caribou.

With a sleek and streamlined body along with a short reddish gold coat and dramatic markings on the face, Caracal is one of a kind. They are among the most beautiful wild cats for many reasons, and these looks are no exception. Caracals are the heaviest and the fastest among small cats in Africa. Plus, they can leap up to six feet in the air which is super high compared to their height.

People also call them desert lynx because Caracals usually stick to hunting in drier areas of Africa and the Middle East. You can easily notice them by their long and black ear tufts that these wild cats use to communicate with others. However, this cat species prefers me-time since the adults spend most of their time alone hunting for birds, rodents, rabbits, and gazelles.

Despite the fact that these cats are hunters, they also have a soft side since the mothers always cuddle their young. The males don’t stay to help raise the young, only the mothers take care of everything. When the kittens are one or two months old, they are able to follow their mother to learn hunting skills.

If you haven’t seen a cat that can rotate its hind legs 180 degrees, now you are looking at one. On top of that, Margay can also hang from a branch by one hind food as well which is super cool. That is not all, those flexible hind legs allow Margay to run head-first down trees just like squirrels as well. The cat has thick and plush fur along with a long tail that they use as a counterweight to aid in balance.

Margay’s habitat is usually in the forest of both deciduous and evergreen as well as shady cocoa or coffee plantations. These spotted cats are native to Central and South America from Mexico to Argentina. The cats spend most of their time in the trees, leaping after and chasing birds and monkeys through the treetops. These cats are also great jumpers at a great height as well.

These beautiful cats hunt almost exclusively by night, and their prey includes birds, small monkeys, tree frogs, and insects. Nowadays, Margays are in the threatened class due to hunting for their fur which is very close to extinction. Some people even catch them and smuggle them across the U.S border for the pet trade.

Who wouldn’t love wild cats when they look so fluffy and adorable like this one right here? If you look closely, you can see that their pupils contract into small circles rather than vertical slits. You can find them in cold and arid environments of rocky steppes and grasslands at elevations up to about 15,000 feet. Their habitat ranges from Western Iran to Western China throughout central Asia.

Pallas Cats have the longest and densest fur of any cat, and it is twice as long on their belly and tail. The fur keeps the cats warm as they hunt on snow or frozen ground in winter. Also, the length and density of their fur change seasonally by growing longer and heavier in the winter. As for summer, they have more stripes and ochre colors in their fur along with black rings on their tails.

These wild cats are loners, and they are solitary and territorial since they spend most days in caves, crevices, and burrows. Pallas Cats are ambush hunters, and they stalk their prey using short vegetation and rocky mountain terrain for cover. Their prey includes small rodents, birds, and occasional insects, and they are very aggressive.

This is the type of wild cat that you want to hug as soon as you see one, so fluffy, isn’t it? Pampas Cats have a broad face and large pointed ears with coats of different colors from silver gray to light brown. You can find them in the open grasslands and high pampas of southern South America east of the Andes. These cats hunt at night from the ground, their prey is usually birds, cavies, and other small animals. Currently, Pampas Cats are now in a nearly threatened class due to habitat destruction throughout their range.

Looking adorable and calm, sand cats are the only cat in the world living foremost in true deserts. Sand cats inhabit both sandy and stony deserts as well as areas far from water. The thing that allows them to be able to dwell on hot surfaces is their thickly furred feet. Those feet can adapt to the extremes of a desert environment of both hot and cold conditions.

Sand cats prefer to live alone throughout the year, and they only pair up to mate which is different from most cats. As for their habitat, sand cats live in burrows and they are great diggers with those paws. Their meal involves burrowers since they can easily dig them out using their skill.

Indeed, these are the smallest wild cats among their relatives but that doesn’t mean they can be pets. Despite the fact that sand cats look exactly like domestic cats, they are actually fierce predators. Snakes are one of the meals on their menu, and they can hunt both in the daytime and nighttime. The cute part is sand cats purr and meow just like domestic cats, and they also yelp like a chihuahua.

Meaning Wolf-Deer in Portuguese, Serval is an agile spotted cat that is not known by too many people. The cats are slender, and they are the cats with the longest legs among their family members. Serval is active both day and night, and they are more active in the early morning, around twilight, and at midnight. Just like most cats, Servals are carnivores and they prey on rodents, small birds, insects, and reptiles.

Sometimes they hunt larger prey like hares, flamingos, and young antelopes by using echolocation to pick up the vibrations of their prey. With such ability, they don’t need to see their prey until its final pounce. Servals also have the ability to leap vertically and catch prey like birds right out of the air.

Many people want to have Serval as pets because of their beautiful and fierce appearance, and they are not aggressive. Still, they are wild animals that are not recommended to have as pets at all. These wild cats also face threats such as the degradation of wetlands and grasslands, poachers, hunters, etc.

The name already suggests that this wild cat lives in the cold under its fluffy and soft coat. Snow leopard aka Ounce is a large and long-haired Asian cat that inhabits the mountains of central Asia and the Indian subcontinent. The whitish or gray fur with black spots of this wild cat makes it one of the most beautiful cats in the wild.

Snow leopards have several adaptations for living in cold and mountainous environments with their dense fur of course. The fur helps the leopards to minimize heat loss while the broad paws allow them to walk on the snow easily. These kings of the mountains are very powerful and strong, and they can leap 6 times their body length.

Snow leopards prefer to ambush their prey from above, then kill with a bite on the neck. These wild cats are capable of killing most animals in their range like sheep, deer, ibex, and domestic livestock. When hunting, snow leopards usually hunt in pairs especially mating pairs if not alone. Their population keeps on decreasing due to poaching and illegal trade of their skins and body parts.