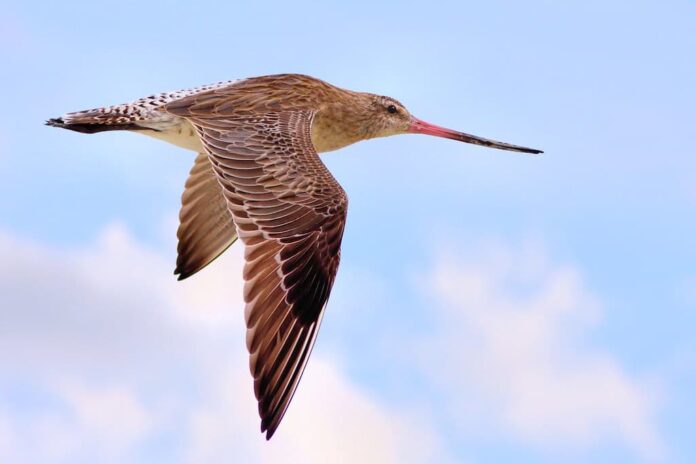 Having the ability to fly is already awesome, but getting to be among the highest flying birds is even cooler. These birds are the ones that can go so high up in the sky during their flights. We all see birds that can fly at a distinctive height, but the top ones are what we focus on today. In this article, you will see some of the highest flying birds with their flight height in detail. Some of these birds are the ones we are familiar with, so let’s find out how many of them that you know.

Just so you know, 11,300 meters is the average height at which commercial planes travel. No doubt why there are reports about these birds getting sucked into jet engines up in the sky. Such ability allows the vultures to scan wider areas for their potential food sources from above. This vulture species has an average cruising speed of about 22 mph. Also, it stays in the air for 6-7 hours every day while scavenging for food.

The unique thing about the highest flying birds is that they have a certain type of hemoglobin for better breathing. A human would already pass out from lack of oxygen at this height, but these birds are stronger than that. They usually go this high in order to find food or nesting materials, and they can go as far as 90 miles. Sadly, Ruppell’s Vultures are now endangered due to loss of habitat, incidental poisoning, and other factors.

These are the large and stately birds that you can find in the northern parts of Europe and Asia. Common Cranes usually fly in flocks of up to 400 birds during migration where they gather to rest and feed. During their migration, these birds can fly at altitudes as high as 10,000 meters above sea level. That makes them the second highest flying birds in the world, and they can pass over mountain ranges during migration easily.

The global population of common cranes is more than 600,000 nowadays, a majority of them are in Russia and Scandinavia. However, they also face threats even if their population is nowhere near threatened. The main threats to the species are habitat loss and degradation which result from dam construction, urbanization, agricultural expansion, etc.

People have seen and heard these geese flying across Mount Makalu which is the fifth highest mountain on earth. But that is not all, some cases also reported them flying over Mount Everest as well. Most of the time, bar-headed goose migrates over the Himalayas to spend winter in parts of South Asia. Their habitats during winter are cultivated fields since they can feed on barley, rice, and wheat, and may damage crops.

It is a large white swan that has a long thin neck and black bill with a large triangular patch of yellow. In winter which is migrating season, these swans go to the UK from Iceland while some others go to the north. Apart from winter, they spend most of their time swimming, straining the water for food, or eating plants in the water. Despite the fact that they are large and heavy, whooper swans are powerful fliers.

Whooper can migrate hundreds or even thousands of miles to their winter sites in southern Europe and eastern Asia. During that time, the swans will fly non-stop at very high altitudes in flocks of up to a hundred or more. Apart from being one of the highest flying birds, whooper swans are also the national bird of Finland.

Just a mountain-dwelling bird that you can easily tell by its yellow bill and bright red legs and feet. The glossy black plumage is not the only attractive thing this bird has, it also has the ability to fly very high. These birds are among the crow family that breeds in Africa and Asia, and they nest at a higher altitudes. They breed on coastal sea cliffs, feeding on adjacent short-grazed grassland or machair. Nowadays, alpine chough’s predators are peregrine falcon, golden eagle, Eurasian eagle-owl, and a common raven that take nestlings.

This vulture species is the only known bird to feed on bones as a daily diet which sounds weird to us. Besides bones and bone marrow, bearded vultures also eat small lizards and turtles. It is also the Alp’s largest bird as well as one of the rarest raptors in Europe. You can easily recognize bearded vultures by their blood-red feathers which makes them one of the most metal birds.

As for wild bearded vultures, they rub soil into their feathers to look more intimidating which works. They are also attracted to other red things like leaves and redwood. You can find them in mountainous regions from Europe through Asia and Africa especially desolate and lightly-populated areas.

The interesting thing bearded vultures are commonly monogamous, and they breed once a year. However, females accept secondary mates in order to increase the chances of producing offspring and double their protection. They don’t lay more than three eggs, and the female incubates them from 53 to 60 days. Bearded vultures are not in the threatened class due to habitat degradation, disturbances of nests, reduced food supplies, etc.

It is a massive bird that can fly at a great height up in the sky in spite of its weight. That is why they prefer to live in windy areas where they can glide on air currents with little effort. Andean Condors live in mountainous regions like their name suggests, but also near coasts replete with ocean breezes. These birds are vultures, so they feed on animals, carcasses, and dead marine animals for those who live along the coasts. Andean Condor now is in the threatened class and is close to extinction due to hunters and persecution.

You can easily tell that a duck is a mallard by the glossy green head that we often see in cartoons. These large ducks with hefty bodies can be found in almost any wetland habitat including permanent wetlands like marshes, bogs, etc. Not every duck can fly, but this one can, and at a noticeable speed and height as well. Mallards are excellent endurance fliers that can fly at a sustained speed of up to 40 miles per hour. That allows them to travel for about 800 miles in 8 hours at a height of 6,400 meters.

Mallards choose new mating partners each fall, staying together throughout winter and into the spring mating season. Once the mating season has ended, the male mallard moves away from the female. The female will build a nest out of breast feathers and twigs near a body of water. She then lays a clutch of 13 eggs at most and incubates them for a month.

Small in size yet very loud and noisy, bar-tailed godwit is a member of the highest flying birds family in the world. These birds breed on Arctic coasts and tundra in winter, and their migration is the longest non-stop flight of any bird. Their journey is also the longest without pausing to feed as well, pretty strong right?

When breeding, the females usually lay 4 eggs and then begin the incubation by both the male and female. The eggs will hatch after 3 weeks, and the parents will teach them to find food and fly. Their diet consists of insects, crustaceans, mollusks, aquatic berries, etc. These birds go on long flights at a very far distance that usually takes days, quite strong for birds this small.

As carnivores, white storks eat a wide range of animals like insects, fish, amphibians, reptiles, and small animals. These large birds fly south from their summer breeding grounds in Europe in August and September. During migration, they fly as high as 4,800 meters in flocks of thousands of individuals all at once. As for breeding, white storks usually breed in open farmland areas with marshy wetlands.

They build large stick nests in trees, on buildings, or on other platforms with large sizes in loose colonies. The nests usually last for years, and the males arrive in the migratory areas earlier to choose the nests. Then the female lays an egg of about 4 up to 7 at a time, and that’s it for the year. Sometimes the parents kill the chicks that are small or weak to reduce brood size and to increase survival chances.