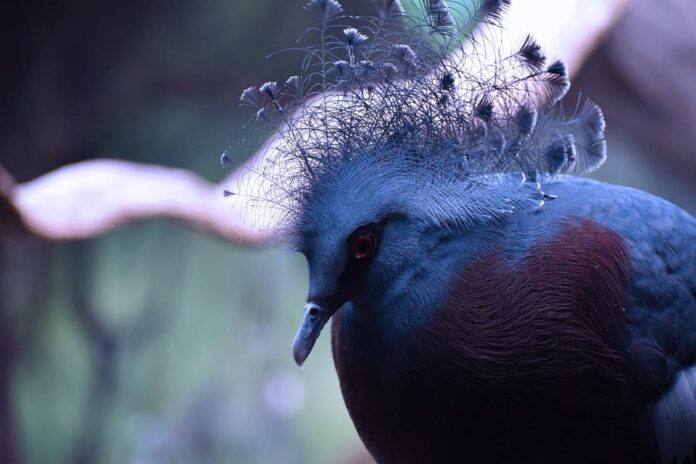 You are looking at the national bird that is present in the flag of Uganda, and that majestic look is undeniable. The plumage of this crane is mainly gray while its wings are rather white. The head of the crane has a crown of stiff golden feathers that bring out the king of the bird’s appearance. These cranes are omnivores, and they live in dry savanna with nests near marshes or near water sources. This species is now endangered as it faces threats to its habitat due to drainage, overgrazing, and pesticide pollution.

Red crown is super rare among birds, and this small partridge totally rocks its crown. You can find them in rainforests across Southeast Asia, and the birds build their nests on the ground. However, they can fly for a short distance when necessary but not always because they prefer running instead when disturbed. This bird species is not in the category of threatened species due to habitat destruction.

With turquoise blue color covering almost the entire body, this fruit-loving bird is a true beauty with class. The most interesting part of this bird is its crest which stands on its head like a crown. The crown of Great Blue Turaco is pitch black which totally stands out from its blue body and yellow-red beak.

The funny thing is these birds with crowns have the looks, but they don’t have the moves. Their wings are rather short and round which make flying a little more like gliding when they leap from one tree to another. During mate season, the females lay 2 eggs with beautiful blue color which is super awesome. Their populations have declined due to hunting and habitat reduction by people.

That feathered crown with black tips is one unique beauty that makes this little bird charming and attractive. When sunbathing, the bird spreads out its wings with its tail low against the ground and tilts its head up. Yup, they enjoy sunbathing as well as dust bathing and sand bathing while people thought it was a defensive posture. Hoopoe is also the national bird of Israel, and these birds have been on earth for so long that they were considered sacred in Ancient Egypt.

Not everyone is familiar with Kagu, that is because they are endemic to the dense mountain forest of New Caledonia. Kagu aka Ghost of the Forest is a crested and bluish-gray bird with long legs that spend its time on or near the ground. The unfortunate thing is that these birds with crowns are a bit too bright for the forest floor bird. That makes them vulnerable to hunting and predators which leads them to a threatened class close to extinction.

Here we have the most beautiful cockatoos, and you can easily tell why. This cockatoo species have a unique bright red and yellow crest contrasting its salmon pink and soft textured white plumage. The bird is super adorable both when they stay in one place and when they fly. It got its name in honor of Major Sir Thomas Mitchell who was fond of the beauty of these crowned birds. This cockatoo breed lives in extensive woodlands, and its population has declined due to habitat loss.

This is a giant forest raptor as well as one of the largest eagles in the world. This powerful eagle has brown and white plumage with a shaggy crest that stands up when it wants to attack. It is a solitary and fiercely territorial bird that feeds on flying lemurs, squirrels, civets, snakes, and more. This eagle keeps one mate for life, and it lays a single egg every two years.

This species is now on the list of critically endangered species due to shooting, trapping, and deforestation. People kill them mostly out of fear and ignorance, or just for sports despite the law. Illegal logging is also the part that causes the loss of habitat and food of these crowned birds. The estimated population of the Philippine eagles is only about 400 pairs in the wild now.

Not every chicken looks good, and the one exception is this elegant chicken right here. It is the European chicken breed that has a very large crest of feathers that somehow limits its vision. Polish Chicken is a fun and friendly chicken with personality and good looks. Because they can’t see very clearly due to their enormous crowns, the chicken tends to be timid and easily frightened. However, they make great pets once you get to know them. This species is now in watch status because their numbers are low.

With a long ornate crest of red to orange in color as well as black and blue spotting, Royal Flycatcher is very easy to recognize. The bird is well-known for its spectacular crest with different colors between males and females. The crest is vivid scarlet in males, and yellow in females, but both are decorated with splashes of black and steel-blue tips. Normally, the crest lies flat but the bird can open it up like a fan. These beautiful crowned birds live in dry forests and woodlands near coastal regions, and they fall into the vulnerable category due to habitat destruction.

The queen of pigeons is no species other than the one you are looking at right now. The bird is deep blue-gray in plumage with a maroon chest and hot red irises that look elegantly majestic. When it comes to the beautiful birds with crowns, the elegant lace-like crest totally brings out the beauty. This pigeon species live in the lowland and swamp forests of northern New Guinea and surrounding islands. As for their status, these majestic birds fall into near threatened due to hunting and habitat loss.