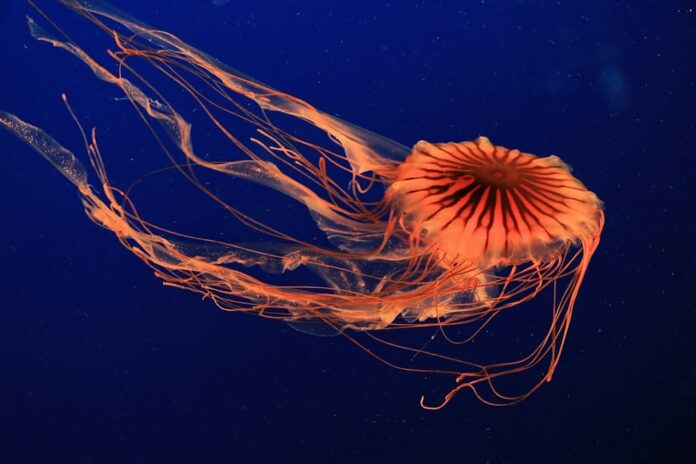 This is another species of box jellyfish that is cube-shaped and transparent, and it is one of the venomous jellyfish. Also known as Habu in Okinawa Prefecture of Japan, the encounter between this jellyfish and people is very common. The sting of this jellyfish species is very dangerous, and painful, and can be fatal in certain cases. All stings are linear in nature as they cause both intense pain and systemic symptoms. Apart from pain, the victims also experience cardiac arrest, respiratory failure with acute pulmonary edema, or even worse, death.

Chironex fleckeri antivenin is the solution to the sting as it relieves the pain, reduces the severity, and improves other symptoms.

So tiny and almost transparent, this jellyfish is so small its size is just about the same as an adult’s fingernail. This species is so deadly it causes severe pain that can last up to 12 hours. That will follow by burning sensations on the skin, nausea, vomiting, excruciating stomach cramps, muscle cramps, cardiac problems, and many more. Some said that the pain is so unbearable the victims actually beg for death. The interesting thing about this venomous jellyfish is that they can fire stings from their bell and tentacles. You don’t have to get in contact with them to experience the pain, they will deliver it to you from the distance. If treated properly, the sting from this jellyfish is not fatal although death from a brain hemorrhage is possible.

Apply vinegar on the site to deactivate any remaining nematocysts on the skin.
There is no antivenin, so sending the victims to the hospital immediately is the best solution.

The good thing about this jellyfish is that its sting does not kill, it stuns the victims. Being one of the largest jellyfish species, this one can grow as large as 2.4 meters with 55 meters long tentacles. These soft creatures can have up to 1200 tentacles, and those tentacles are arranged in eight sets that contain between 70 and 150 tentacles. Lion’s mane jellyfish are tremendous and surreal, and they often travel in large blooms. A sting from them can be very excruciating, and it is also deadly sometimes.

Apply vinegar to neutralize the envenomation of the jellyfish, and the pain will disappear in no time.

With the nickname of Fire Jellyfish, this species has a potent sting that burns really badly. The fire jellyfish has a solid body with bright pink wart-like protrusions on top of it. This jellyfish is also large compared to some of the other venomous jellyfish, so they are more visible to swimmers. In spite of their painful sting, this one is not so life-threatening which is a good thing to know. Since their sting can cause the Irukandji syndrome, there are some symptoms that swimmers should be aware of. Those include severe lower back pain, nausea, vomiting, breathing difficulties, profuse sweating, severe cramps and spasms, and a feeling of impending doom. Their sting is not deadly, but victims should seek medical help immediately to avoid further pain.

Flood the sting with vinegar to reduce the pain and swelling.

You are looking at a marine hydrozoan that looks like a jellyfish and delivers a painful sting. Actually, it is not a true jellyfish but a siphonophore that is a colonial organism made up of many specialized animals. Every organism is attached to one another, and it cannot survive independently. This venomous jellyfish has a sting that is venomous and powerful enough to kill fish and humans. It looks harmless and quite beautiful, but it is responsible for more than 10,000 human stings in Australia each summer. Just like most venomous jellyfish, this one has long tentacles that may drift and sting swimmers. The sting leaves a welt like a whip mark, and it can be very painful for several days. Sometimes the venom can travel to the lymph nodes and may cause symptoms like larynx swelling, airway blockage, cardiac distress, and breathing difficulties.

With long and wispy tentacles, sea nettles are one of the most dangerous jellyfish that we all should know about. This jellyfish species swims in blooms, and they are also very common as well in the sea. They have 24 tentacles, and each of which can reach as far as six feet. A simple touch or sting from their tentacles is poisonous enough to cause extreme pain to swimmers. That is because those tentacles contain millions of microscopic stinging cells that inject toxins into their victims. Also, this jellyfish is also capable of delivering its toxin after they have washed up on the beach. For those who have allergic reaction to jellyfish stings, the sting from the nettle can cause dramatic swelling, muscle weakness, dizziness, and more.

Here you are looking at a species of box jellyfish with extremely potent and painful venom that kills people. Their venom is so dangerous it can kill people in as few as three minutes. This species is almost invisible, and the worse part is they usually occur in shallow water where people go swimming. The dangerous part about the sea wasp is that their tentacles are armed with up to 5,000 million stinging cells. Simple contact on their tentacle can be fatal for an adult, and it can also kill a child. Even if the sting doesn’t kill, it can still cause shock from the overwhelming pain which can lead to drawn.

Ice packs are the best treatment for local pain, but seeking medical help is a must for this jellyfish sting.