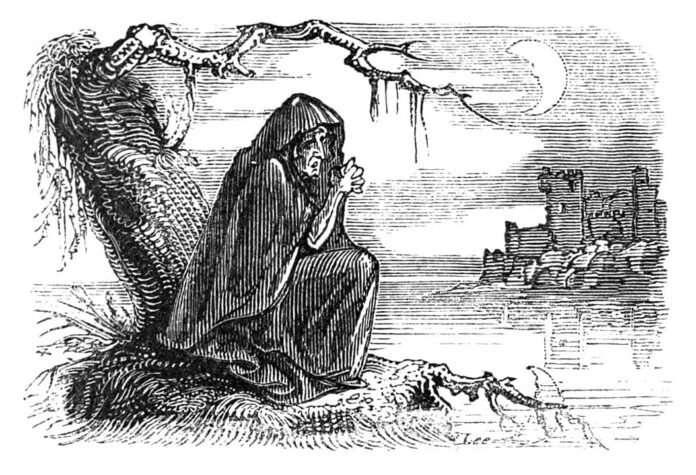 Halloween is probably over, but there are tons of creepy things to know about spirits in the world. Banshees, for example, are female spirits known as the omen of death in Irish and Celtic folklore for centuries. The banshee roams the countryside, and her wailing will be heard at night when death is predicted. In Ireland, people believed that banshees only warn families of pure Irish descent. For more detail, take a quick read below.

1What Is Her Origin?

The stories of her existence date back as far as the 1300s, and the origin of this death omen is multiple. Some said that the spirit was the ghost of a young woman who was brutally killed and died so horribly. Some others said they are the spirits of women who died in childbirth. She then became the one who watches families and loved ones to warn them of impending death. The spirit of this woman appeared to people who were about to suffer a violent and painful death especially murder. Legend has it that she wailed outside the family’s door at night, but seeing her was really rare.

In an even older origin back in the 8th century, historians described Banshee based on a tradition. The tradition involved women known as “keeners” who sang a sorrowful song to lament someone’s death. The keeners accepted alcohol as payment, and that made them sinners which in return, punished by being doomed to become Banshees. Legends say that Banshees don’t cause death, they only served as a warning of it by her wailing and crying. The Banshees may seem ghoulish, but they have no record of being violent or mischievous. It is just that seeing one or even hearing one is so eerie it brings chills down the spine.

Also known as the white lady, most legends suggest that she can appear in a number of guises. Sometimes she appears are a young beautiful woman while the other time as a stately matron or an ugly frightening hag. Some also believed that she also appeared as animals like the weasel, stoat, hare, or hooded crow. These are the animals that are commonly associated with witchcraft in Ireland. Many sources said that the spirit has noticeably red eyes from crying so much. Banshees are usually dressed in a gray or white hooded cloak, and she has long hair that she runs their comb through. Some said that the comb that the banshees used is to lure innocent souls into their doom. That is why people in Ireland never pick up any comb that is lying on the ground even until this day.

Seeing her is very rare, but we can tell her presence by her shrieking, wailing, or keening. She usually appears at the site of imminent death in the middle of the night. When she appears, she lets out a chilling and high-pitched wail that brings goosebumps to our skin. Whether or not you see her, hearing her scream is a sign that your family or relative is going to die. Or in some other cases, the person who hears her scream is about to meet an ultimate end. There are times when everyone in the family is perfectly healthy but the member died a week or a few days after the scream.

4Is She Good Or Bad?

Banshees come in many forms, and they are both good and bad in terms of appearance and behavior. Some of them had strong ties to their families in the life and continued to watch over them in death. When they manifest themselves, the good Banshees appear as beautiful enchanting women that sing a sorrowful and haunting song. The song is usually full of concern and love for their families, and the song lasts for a few days.

On the other side, there are also angry and scary Banshees that many people are familiar with. During their lives, these women had reasons to hate their families and appear as distorted and frightening apparitions filled with hatred. This type emitted howls that are scary enough to chill you to the bones. Rather than appearing to warn a family member, this one is more into celebrating the future demise of someone they loathed.

There is also another tale about evil Banshees that derive pleasure from taking people’s lives. This banshee seeks out their victims and wail at them to the point that the person commits suicide or goes insane. The evil banshee was a ghost of a young girl who suffered a brutal death and her spirit remains. So she would appear as an old woman with rotten teeth and long fingernails, and she has blood-red eyes. Her eyes are filled with so much hatred that looking directly into them will cause immediate death. As for her mouth, it always opens as her piercing scream torments the souls of her victims.

5Any Stories About Banshee?

Legend has it that Banshee liked to cry at the crowning or death of a true king. One of the most well-known stories about this wailing spirit was in 1437. The event took place at the crowning of legendary Brian Boru who overthrew the O’Neils and began the O’Brien dynasty. A woman purporting to be a “seer” approached King James I of Scotland and correctly predicted his murder. She said the murder would be at the instigation of the Earl of Atholl, and that happened.

Another story was in 1801 when the spirit paid a visit to the Commander in Chief of the British force in Ireland. He had attended a party and invited a few guests back to his home. Among the guests, Sir Jonah Barrington and his wife woke up at 2:30am to what he described as “plaintive sounds”. The sound came from outside his window, even a maid was also woken up by it. The sound later turned into the name Rossmore, being screeched three times. The next morning, a servant said that he heard odd sounds from Rossmore’s room at 2:30am. They all entered the room, and found him dead.

Apart from the noble families, similar things also happened to many common Irish families as well. There was a man who was walking home on a cold and blustery night when he met an old woman. He told his wife that he had tried to comfort that old woman for she was crying and wailing outside. He said that the old woman wore black with a veil over her face. She kept moving away every time he went over to her, but she kept pointing at the house. The wife, with all her knowledge of the Irish legends, knew straight away what the old lady represented. Three days later, her brother died peacefully in his sleep. Little did the man know about his encounter with the banshee, he even tried to invite her into the house for tea!