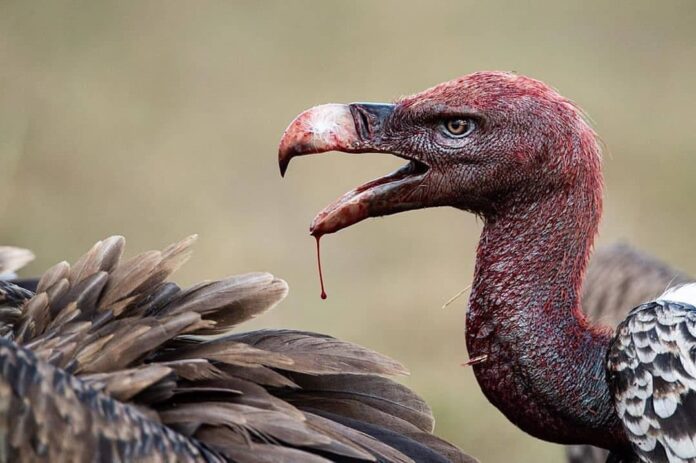 We all have different preferences when it comes to our meals, and that goes the same with carrion eaters. Also known as animals that eat corpses or scavengers, carrion eaters enjoy the decaying flesh of dead animals. Carrion is an important food source for scavengers, and they play a vital role in recycling nitrogen and carbon in animal remains. At the same time, carrion eaters also help us a lot in cleaning up the mess from dead animals as well. Without them, you will see more dead carcasses on roads or in the forest, and boy that’s nasty. There are many carrion eaters out there, but I only bring the main ones for you today so check them out.

There are four species of hyenas, and three of which are scavengers including Brown Hyena, Spotted Hyena, and Striped Hyena. All of them are frequent scavengers, and they often dine on leftovers of other predators like lions. Hyenas have hunting skills and they usually hunt in pairs or small groups, but they don’t often do that at all. If they do, these skilled hunters can easily take down a wildebeest or antelope for a fresh meal. Sometimes they also kill and eat birds, lizards, snakes, and insects as well. With good hearing and sharp eyesight, hyenas can track their meal very easily. Not to mention they are fast and they can run for long distances without getting tired, hyenas are one remarkable scavengers.

Also known as the Tasmanian Tiger, this carnivorous marsupial has powerful bites that help them to crush bones during scavenging. With surprisingly strong teeth and jaws, the devils can take prey up to the size of a small kangaroo. However, they usually feed on corpses. These devils can dig to forage corpses, and they are also known to eat cadavers in their unique ways as well. Sometimes they feed on carrion such as roadkill and dead sheep. The cool part is they can eliminate all traces of carcasses of small animals since they devour even the bones’ fur. That is why Tasmanian farmers respect the devils since they can clean carcasses that prevent the spread of insects.

This marsupial is omnivorous so they eat almost anything, and carrion is also on their menu. Since they are highly opportunistic animals, a large amount of their diet consists of scavenged food items like carrion. Because so much carrion is roadkill, opossums are often killed by cars while looking for food on roadways. The special thing about them is that they are surprisingly resistant to rabies and Lyme disease. That is one of the reasons why they are able to feed on carrion and other rotten things without a problem.

Being the most well-known scavengers among other birds of prey, vultures feed on dead animals. Therefore, they rarely attack healthy animals but they may kill the wounded or the sick to have them as meals. Most vultures have very strong and sharp beaks that allow them to tear open a carcass with ease. In case a carcass’s hide is too thick for its beak to open, the vultures will wait for a larger scavenger to eat first. As for some of the largest vultures, they can use their powerful beak to tear their meal by themselves.

Vultures are great scavengers, especially in hot regions, and their stomach acid is exceptionally corrosive. That means they can safely digest putrid carcasses infected with different bacteria that would be lethal to other scavengers. The great part is that vultures clean the earth from the decaying corpses of dead animals with food waste. Vultures have great eyesight that allows them to spot carcasses from the sky, and they always clean up carcasses for us. The only sad thing is that not many of us appreciate them, and some people even hunt them to their extinction.