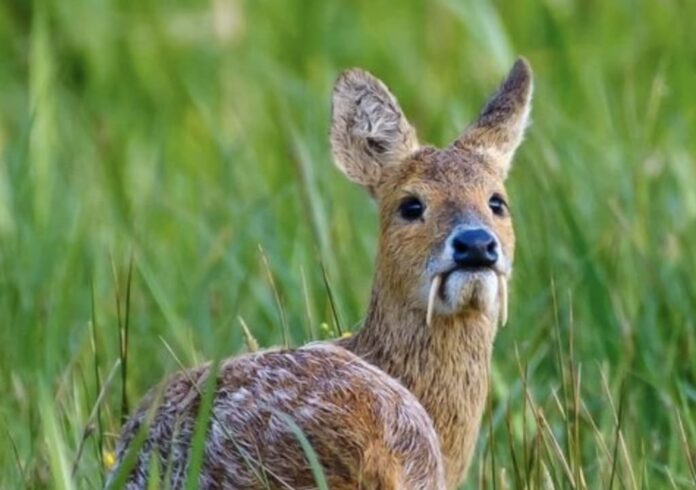 With both a strange name and appearance, water deer is a very fascinating animal in nature. Native to China and Korea, the water deer has a pair of prominent tusks instead of antlers like normal deer. The water deer have developed long canine teeth which protrude from the upper jaw, and the canines are fairly large in the bucks. Water deer are not known by many, so here are several interesting things that you might want to know about this creature.

Water deer have thicker and stockier bodies than normal deer, and they have powerful hind legs. Speaking of the hind legs of water deer, they are different because they are longer than their front legs. The long hind legs make them run with rabbit-like kind of jumps, which is somehow cute to watch. As for their coat, the color is overall golden brown in color while the undersides are white. In the fall, their summer coat becomes thicker to keep them warm in colder weather.

The most extinguished feature is their long canine teeth which are commonly referred to as fangs or tusks. The awesome thing about their canines is that the buck can draw the teeth backward out of the way when eating. During aggressive encounters, the buck thrusts his canines out and draws in his lower lip to pull his teeth closer together. That is when the bucks show their impressive two-pronged weapon to the rival males.

This interesting deer species tend not to congregate in herds, you usually see them either alone or in pairs. They are very territorial, and they scent-mark a claimed area with a combination of urine and feces. At the same time, they also dig trenches and rub their heads all over trees, branches, and logs, to spread their scent around. The male of this species will not tolerate another buck in close proximity. If that occurs, they will defend their territory against all rivals at all costs. In contrast, the bucks will tolerate the company of a few females which may company them to seek food.

When fighting, they use their long hard teeth as battering rams, and they also try to stab and scratch each other as well. It is actually very common to see wild water deer with torn ears or scars on their faces. The bucks fight over their territory and the females all the time; therefore, there are many altercations they encounter. As for females, they won’t engage in dominance battles but they have a little manner of being territorial at some point. Before and after giving birth, the females will chase other females out of their territory to ensure the safe delivery of their fawns.

Water deer are active during mornings and evenings, and they usually spend their daytime hiding within dense vegetation. The interesting thing is that they alert each other to danger with brief shrill barking. As for the does, they will make a soft peeping to call their fawns. If a deer is injured, it will make a screaming wail. These solitary creatures only come together for mating, but the females are usually more friendly and live in small groups. In case of a predator, they will flee in separate directions in an “every woman for herself” kind of way though.

Just like the name suggests, water deer prefer to live in watery areas like swamps. In addition to swampy habits, the water deer also live in grasslands, mountainous regions, areas along rivers, etc. At the same time, you can also find them in agricultural areas as well as cultivated fields. Water deer are fond of water plants which is why they prefer to live and roam in watery areas. When they are not feeding, they favor dry land more which is a contrast to their interest in water.

When it comes to feeding, water deer are herbivores and their favorite meal is aquatic vegetation. Much of their diet consists of reeds, beets, and fresh shoots of grass. Despite the fact that they are herbivores, Chinese water deer are very picky eaters. That is because they cannot digest dense vegetation compared to other species. That is why they choose plants that are less fibrous but with higher protein and fat.

Water deer are not different from other deer species when it comes to predators despite their scary-looking fangs. This animal is vulnerable to large carnivores like leopards, foxes, bears, and raccoon dogs. Their young fawns can also fall victim to birds and weasels as well. In spite of their aggression toward each other, water deer don’t seek out fights with other animals. Their fangs are not enough to defend themselves against the big carnivorous animals. So when there are predators, they prefer to hide among the tall reeds of the riverbank or run away to evade the danger.

Apart from being food for other larger animals, water deer are frequently hunted as trophies by humans. People hunt them extensively for both meat and colostrum milk, the female deer create colostrum milk only a few days after giving birth. Hunters sell colostrum milk (half-digested milk) to those who use it in Traditional Chinese Medicine. In some areas, water deer are considered agricultural pests so killing them is common.

Besides the two causes, the loss of their habitat is also a part of their population decrease. These animals are very sensitive to environmental changes as well as urban development and agriculture. As a matter of fact, the latter mentioned are important threats to their habitat. Much of their original range has been lost, which is why their distribution keeps on going down. There are less than 20000 water deer in the wild nowadays, and they are not considered Vulnerable according to IUCN.