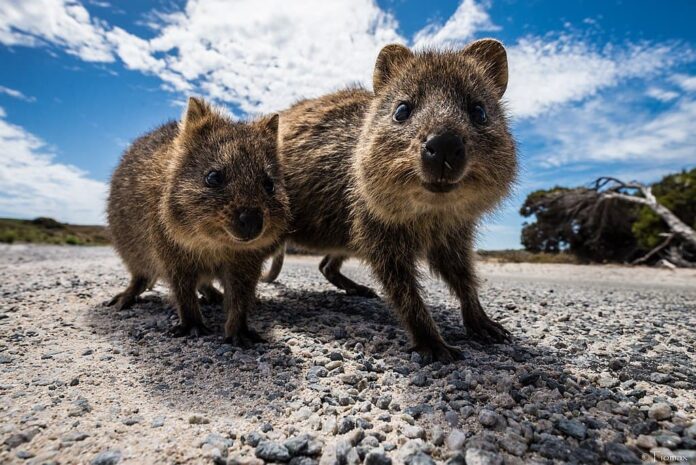 It is quite common to see photos of smiling animals from time to time. But with Quokkas, aka the happiest animals, every picture you see of them is just absolutely adorable. Quokkas are the members of marsupial and macropod families just like wallabies and kangaroos. These happy animals are the only land mammal on Rottnest Island, how amazing is that right? There are many fascinating things to know about this cheerful mammal, so let’s find out together with me.

Quokkas are small four-legged animals covered in fur, and they have pouches in their abdomens for carrying their young. Despite the fact that they are from the same family as the kangaroo, quokka is around the size of a domestic cat only. These adorable animals have narrow faces, round ears, big noses, and tiny paws. The combination of these makes them an absolute cutie to look at from every angle. The quokkas are famous as the most cheerful animals in the world due to the perpetually happy expression on their face. Their expressions range from a tiny smile to a toothy grin, either way, those tiny little faces are totally endearing.

With that face, it is obvious that quokkas are friendly and approachable creatures. Because of their friendliness and loveliness, tourists are fond of them. That is why they are used to people, and have little fear of human contact. Quokkas are not afraid to hop right up to people who are marveling at them, and that is super normal. Not to mention they also do cute poses for selfies and photographs, there are no animals that are as friendly as them.

However, they can be mean sometimes in spite of their friendliness and adorable nature. Since they are used to humans, they are also not afraid to bite us when they feel threatened. This little ball of cuteness is equipped with powerful hind legs that they use for kicking and hopping. So it can be surprising to see and experience when they attack. When fighting over mates, quokkas can also get quite aggressive as well since they are dominant animals.

Another thing that you should know is that they are okay with selfies, but they don’t like to be handled. Trying to pick them up or pet them might result in injuries, and fines by the Australian government. Just because they are friendly doesn’t mean that they are domesticated, quokkas are still wild animals. So if you do anything that makes them feel uncomfortable, don’t blame them for not being nice. Even your own cat scratches you sometimes, so consider quokkas super nice for posing in your selfies.

The regular meal of quokkas consists of bark, shrub, plants, grass, stems, and leaves. One study has suggested that their favorite food is Pink Paper Bells, a type of white-purple flower native to Western Australia. The first time they consume food, they simply swallow it whole. Then they regurgitate the food and eat it again, doing so allows them to extract more nutrition.

As for their habitats, quokkas live in trees, shrubs, swamps, and other areas with dense vegetation. Despite their friendliness, quokkas don’t like the exposure to wide and open spaces at all. These cute creatures prefer environments where they can hide from predators or take shelter from the elements when necessary.

These happy animals don’t have any courtship habits at all. It is the female who decides if she wants to mate or not. It begins when a male approaches her and makes his interest known. If she finds him interesting, she will start grooming him as a sign of acceptance. If she rejects him, he will have to go and find another female. Simple as that.

Apart from being the happiest animals, quokkas are also popular for their rapid reproduction rates as well. These animals mature quickly, and they can give birth twice per year. With their 10 years of lifespan, a quokka can produce between 15 to 17 babies in their lifetime. It is common for them to breed between January and March since they are unbound by mating seasons.

Another fascinating thing about these creatures is that they are capable of something called Embryonic Diapause, which simply means Delayed Impregnation. That is when a female can mate with a male but delay the development of her egg until conditions become favorable for raising a baby. It is great because being able to do so will keep her from expending energy and resources to raise joeys that won’t survive.

Being nice and smiley does not stop them from having predators, and quokkas are vulnerable to cats, dogs, foxes, dingoes, and snakes. Their natural predators are birds of prey as well as dingoes, and the rest keeps coming as they expand their habitat and range. When faced with a predator, their first instinct is to run away. Most of the time, they hop at high speeds or dive into burrows and scurry up branches to hide. If cornered, quokkas will bite with their teeth and scratch with their claws or use their powerful hind legs to kick.

Their population is decreasing lately due to deforestation which is their biggest threat. Humans are tearing down trees to build cities, and that leads to habitat loss. At the same time, weather changes also affect vegetation which reduces their food production as well. Another big threat to quokkas is, not without a doubt, humans. Humans don’t hunt them, but they can’t resist feeding, petting, cuddling, and capturing them. Feeding them is bad because their bodies are not used to the artificial ingredients that we consume.

Fun Fact: If a quokka mother is threatened, she will often throw her baby on the ground to distract the predator. Then she will run away, yeah she throws the baby to save her life. Mother’s love, everyone.

Tips To Succeed In Taking Selfies With A Quokka