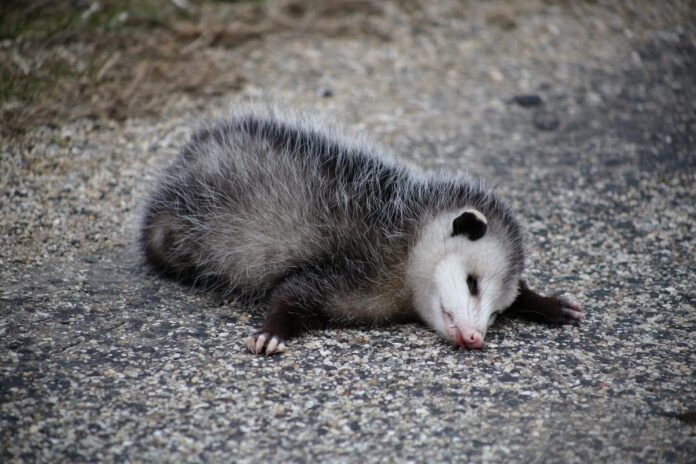 There are many ways to protect oneself from predators, and these animals that play dead do it very well. Also known as apparent death, feigning death, or playing possum, playing dead is very common to some animal species. By pretending to be dead, the animals appear to be lifeless, and some can even emit an odor that resembles decaying flesh. The animals that play dead are often the ones that are lower on the food chain or the ones with a lot of predators. Playing dead is often a defense mechanism, but sometimes it can also be a trick to catch prey as well. There are some interesting animals that play dead in the wild, let’s take a look and see if you know them.

In order to evade their enemies, bark mantis first scurries around to the other side of the three if they see someone coming. If the chance is favorable, bark mantis will simply hide to avoid getting eaten. In some other cases when escaping is not possible, these clever mantises will play dead. They do so by jumping to the ground and falling into the dead leaf litter and playing dead right there. The bark mantises are so good at faking dead you can literally poke it and it will just lay there, not moving. This strategy works most of the time not only because of their play-dead skill but also their camouflage with dead leaves. Some predators will find it difficult to spot them among the leaves with similar colors, so they will somehow leave.

There are a few certain duck species that will play dead when faced with imminent death. The case is known as tonic immobility, and scientists think that such a response is a defense mechanism that they display. When threatened, the ducks will display a typical death-feigning posture as if they were dead. The act includes the head extended maximally with eyes open and wings held tight against the body. The thing is that duck is one of the unfortunate animals whose act of playing dead does not really work. The predators will still eat them anyway, poor creatures.

Oh these snakes are the most dramatic snakes that you will ever see when it comes to defense mechanisms. When threatened, they will feign death by opening their mouth and rolling over on their back, then writhing around. You might wonder why playing dead is helpful for them to survive predators. Wouldn’t it be nice to consume the prey that is already dead without having to attack them just like the ducks?

The thing is that when playing dead, these hognose snakes exhibit indications of disease or poisoning. As predators, they might think that there is something very wrong with that dying reptile. Therefore, it is probably dangerous to consume a snake with such symptoms before dying. Sometimes the snakes even let a foul-smelling volatile fluid oozes from their body. I mean, who would want to eat that kind of dead food, right?

While most animals play dead to stay alive, the naughty nursery web spiders play dead to get laid. Yup, you saw it right and this is how it goes. A male nursery web spider will present an insect to their potential mate with the hopes that she will be amenable to mating. If the female starts to feed, the male will resume the mating process. If she does not, the male will pretend to drop dead. Either way, he gets to mate with her. Although different from most strategies of other spiders, these naughty boys get to mate most of the time.

Opossums are peaceful animals who always prefer to avoid a fight if at all possible. But in case of danger, there is one thing that they are very famous for which is known as “Playing Dead”. Some called it playing possum, and that is very common for these marsupials to do when facing predators. When that happens, the creature will faint in shock at the prospect of such a confrontation. This shock induces a comatose state that can last from 40 minutes to four hours. During their fake death display, their body is limp, their front feet form into balls, and drools run out of their mouth. The longer they fake, it may even appear that rigor mortis has begun. Plus with the smell of decay that they are able to produce, predators will simply lose interest in eating them.

You might wonder why the strong and aggressive fire ants choose to play dead instead of fighting. In their case, it is the young fire ants whose stingers and external skeletons are not yet fully developed. These young ants are defenseless since they can neither fight nor flee, that is why playing dead is their only option. This act usually occurs when they are under attack from neighboring colonies, and it is a very effective self-defense strategy. As a matter of fact, this tactic makes them four times more likely to survive aggression than older workers who fight back.

So we have seen animals that play dead to avoid prey or to mate. As for the sleeper fish, they play dead in order to catch prey which is a whole new level of feeding. On a daily basis not just on their lazy days, the fish will lie down at the bottom of their habitat and wait for smaller fish to approach. Scavengers that attracted to what seems like a dead fish, will swim closer to investigate. That is when our sleeper fish quickly attack and eat the unfortunate scavengers.