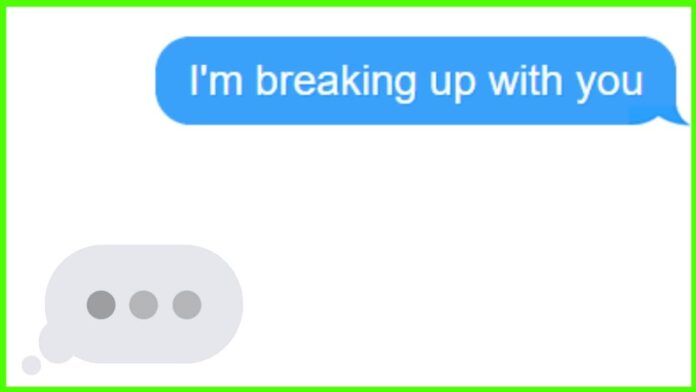 When the spark has gone, people will find ways to get out of a relationship. Some are good, the others are not. There are many worst ways to break up that a lot of people have done, and been doing. Well, if the person has done nothing that harms you or hurts your feelings, they deserve some respect. That means you should avoid any of these breakup methods in our list to avoid bad pictures between the couple. Ending a relationship does not mean you won’t see them again. Worst breakups really do hurt, so try not to cut too deep when things have ended. Let’s see if you have done any of these ways when you dumped your ex(es).

Looks like the other person is being used if that happens. Breaking up in bed is never a good choice. There are many other occasions to do so for god’s sake, just avoid this. If that occurs to a man, he might think he is not good enough in bad. And he will always doubt himself for the rest of the time. To a woman? That makes her feel like she is being used and disrespected by her partner. You can do better than that.

Trying to avoid your lover from every step you take is not a bright way to break up. You might think they will get the message from time to time, but why do that though? Confront them and let them know that you don’t want to be with them anymore, and you will walk free. You can go anywhere you want without worrying that you might meet your lover there. You can hang out with people you want to go out with, and you don’t have to care about anyone’s presence. If you really want to get out of the relationship, let them know.

Avoiding them will make them find you even more, to get the reasons why. Well, there are girls who tried to avoid their boyfriends and called them psychos because the guys wanted to meet them. You are the person who drives them crazy for doing that, so get yourself together and tell them what you want. Talk once, and you are free. Call the police, if your boyfriend is really a psycho though!

3Block Them On Social Media

People seem to be so active on social media than they are in real life. Blocking your partner on Facebook, Instagram, and other social media apps does not make a good breakup choice. Well, it is okay to do that after the breakup. But doing that as the way to break up seems not a wise decision. You will still see them in real life eventually. At the end of the day, there is no better way to break up than by meeting and talking out of it.

4In Front Of A Group

A relationship is between 2 people, so end it just the both of you. There are a lot of people who chose to do their breakups in public, in front of their friends, or in a crowd. That is childish and inconsiderate no matter what. You might not love your partner anymore, but don’t embarrass them in front of people. Embarrassment is not erasable, and so is your mistake by doing that. Even if you don’t like what your partner is doing to do at that moment, stay calm first. People’s judgment is not as painful as when your loved ones break up from you out in the open. Yelling “I’m breaking up with you!” in the park, cinema, school, and other places brings bad images to both of you. Don’t let that happen.

5Let A Friend Tell Them Instead

Why? Just why? Get a grip and face the person by yourself instead of asking a friend to do the breakup for you. You might not feel for your lover the way you did before, but give them some respect. Never involve your friends in any of your breakup matters, even if they are your best friends. You are a person of yourself, so deal with your problems. Being dumped is already a painful thing, but from another person as the messenger? This is even worst. Grownups will never do that. If you accepted the consequences of being in a relationship with that person, deal with them when problems come.

You must hate your lover’s gut if you do that to them. To most people, birthday is a great day that they expect to see good things happen to them. Breakup is not on the wish list on that day, we all know that. Maybe do that after their birthday or some times before their birthday if you can’t wait. And guess what, that is the worst memory to ever have on a birthday.

7Shortly Before Your Marriage

There are 2 cases of this, the marriage is between the couple and marriage with a third person. If you know that you have to marry someone else, never inform your partner on short notice. Don’t leave it till the day is near to let she/he know. The damage is so bad when that happens. For another case, explain to your partner properly why you have to call off the wedding. Marriage is a huge stage in life, treat it with respect and consciousness. The thing to remember is your partner deserves to know everything when any of these cases occur. Find a good time and place to tell them, so they won’t scar too bad from such an experience.

A common thing among couples is breaking up via text messages. That does not usually work well actually. Even if you hate them so much that you don’t want to see them ever again in your life, do it face-to-face. Breaking up through texts leaves a lot of doubts on the other side. There are also people who email their lovers to break up with them as well. It is not that worst, but it is among the bad breakup choices. Oh, and don’t complain if your ex keeps on texting you or calling you after that. Not because they are obsessed with you, they just want a proper explanation.

9When Your Partner Found Out You Are Cheating

If you are not happy in a relationship, leave. Things are so simple, and not everything works as perfectly as the way you want it to. If you think that the person you are with is not good enough for you, let them know. Cheating is the cheapest and most cowardly thing to do in a relationship. Not to mention you want to break up with your partner after they found out that you are cheating. Well, that is okay if your partner can tolerate that. If not, the scene might be bad because no one wants to be cheated on. Even if it is just a game or a one-time thing, never lie or hide from your partner. Let them know, tell them you want to leave. Cheating is never a peaceful way to end a relationship, and the result is not always satisfying as well.

Does this sound bad to you? Breaking up from a girl or a woman while she is bearing the child is the worst to ever do. First and foremost, that shows how irresponsible a man is. He makes her pregnant and leaves her the moment she needs caring and attention the most. People make mistakes, but this kind of breakup cannot be forgiven. There have been women who aborted their babies, or worst, committed suicide during pregnancy after the breakups. There are better solutions to getting out of a relationship, and this is not one of them.