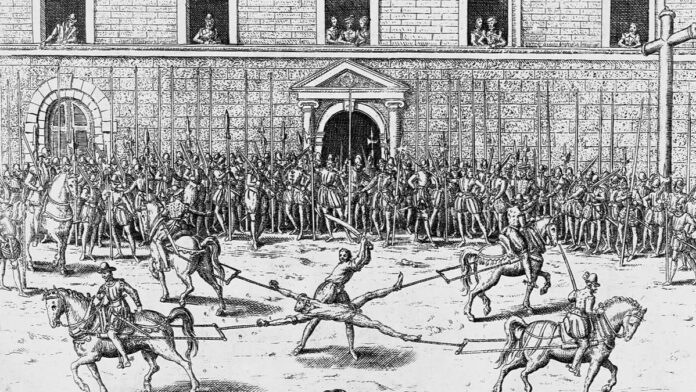 image: Darkness In The Mind

Mostly used in Asia, this death penalty killed the victims slowly and painfully. The prisoner was tied down over several bamboo shoots. The thing is that bamboo grows so fast, about 1 foot per day. So, the bamboo would grow and penetrate directly through the victim’s body, killing them slowly.

Quick and painless, beheading was practiced in many parts of the world as a life sentence. The headsman would use an ax, sword, or knife to behead the prisoner. Asia, Europe, North America, and the Middle East are known to have used this method.

Boiling to death penalty has been used in many parts of Europe and Asia. The prisoner would be kept in a large cauldron which they would be boiled by oil or water to death.

One of the most painful capital punishments is the breaking wheel. To execute the prisoner, a strong man would use the large wooden wheel to break the criminal’s bones or bludgeon him to death.

Another heartless punishment was burying alive. The prisoner who was known to be guilty would be sentenced to death by burying alive. Some countries would bury the criminal headfirst and leave their feet hanging upside down. While other countries buried the prisoner whole as a part of the execution. This death penalty is for people who committed crimes, infanticide, adultery, etc.

Besides burying alive, burning alive was also a popular capital punishment. Many societies have used it as the penalty for treason, rebellious actions, heresy, witchcraft, and sexual transgressions (incest or homosexuality).

This punishment were originally practiced in India along with other countries in South and Southeast Asia. The elephant was trained to put its foot on the person’s head gently first. That way, the witness could look under the elephant’s to make sure if he’s the criminal. The prisoner would beg for mercy or for the witness to say that it was not him. However, if the witnesses denied him as the criminal, the elephant would crush them instead. The elephant would begin crushing the head flat to the ground, or some would crush the arms and legs first.

The victims of this punishment would be either given no food or water till they die. This execution killed them slowly as starvation can cause permanent organ damage and death.

This death penalty was originally from Rome who condemned the criminals by throwing them to be killed by wild animals. If they committed a crime or any illegal acts, they were left in the arena before releasing the animals into it. This act was practiced in Ancient Rome as well as some parts of Asian countries. The animals that used to kill the prisoners were lions, leopards, alligators, crocodiles, piranha, sharks, and more.

Here is the modern way of capital punishment originally from the United States. It was used to extract information, and sometimes execute the prisoners. The person was strapped to a wooden chair, and electrocuted through the electrodes fastened on their head and leg. This penalty can result in brain damage, internal organ damage, and more.

Flaying is known as the most brutal punishment ever used as the victim’s skin were slowly removed from their body. This method of execution was used for those who commit crimes. Some victims’ skin was removed only some parts, while the others’ were removed completely.

Gibbeting was known as the common punishment for traitors, murderers, highwaymen, and especially, pirates. The process of the punishment involved keeping the prisoners in a gallows-type structure and hanging them in public. The cages were usually smaller than the person to increase discomfort. And the victim would be left there to die, and displayed as a warning to the others to avoid the crimes.

For those who lived their lives on the sea, the punishment was keelhauling. The sailors were tied to a line that looped beneath the vessel. As we know, old ships have barnacles and other marines grow on them. The victim was thrown overboard, then dragged under the ship’s keel that was full of barnacles. That will result in serious cuts, lost limbs, and more.

Pendulum is a type of death punishment involved with a huge blade swinging to slice the victim’s body. The blade was hung by a rope and lower little by little till it cut the person’s torso completely. The prisoner was tied as he laid down on the metal or wooden bed before the execution started. It took some minutes before the blade completely sliced the body and left the victim dead.

This is the common punishment used in old times by a lot of countries. The victim was hanging by their feet upside down, then 2 men saw him in half started from the groin. The worse thing is that, as the victim was hung upside down, the blood still flow to his brain keeping him alive. That way, he would watch his body being sawn till his death.

Another China’s death penalty is slicing to death, aka death by a thousand cuts. The prisoners were tied to a wooden frame mostly in public. Then, his flesh was cut from their body in multiple slices which killed them slowly. This punishment was for crimes such as high treason, patricide, or matricide.

Europe had a way more painful method to sentence their prisoners to death. The criminals were kept in the place where the scorpions, snakes, or spiders would soon release and sting them to death.

This capital punishment is mostly seen in Islamic followed countries such as Iran, Iraq, Saudi Arabia, Afghanistan, and more. No matter if the prisoner is a male or female, they received the same punishment for their crimes. Stoning is practiced by a group of people throwing stones at the person until they die. In some countries, the prisoners were buried in the ground and their head was the only part left. Then, the people would throw stones at their heads until they die.

Strangulation could be done in various ways: using ropes or an instrument called Garrote. If using ropes, the prisoner’s hands were at their back then their head was put in the rope. After that, they would be pushed off the object that stood on leaving them hanging till they die. If using Garrote, the prisoner would be placed to sit in the position where their neck was locked to the instrument. Then, the handler would tighten the object tighter and tighter until the victim die.

In ancient Persia, the death penalty was suffocation by ash. The prisoner would be kept in the room or tower filled with ash. Then, the wheels were constantly turned while the victim was in there as the ash whirled about. That is when the prisoner died as he inhaled the ash till he suffocated himself.

Well-known in China, it is among the capital punishments that had killed countless criminals and slaves back in the past. 4 strong horses were used in the act. The two arms and legs were tied to the horse before the order was given. Then, all 4 horses run in different directions,5, and immediately tear the prisoners apart.

Scaphism, also known as the boats was a death punishment practiced by ancient Persian. The prisoner was stripped naked, then firmly fastened within the interior space of two narrow rowing boats. That will keep his head, hands, and feet protruding. Then, he was forced to ingest milk and honey while more of the liquid was poured entirely on his body. The criminal then left to float on the pond or the sun while the sweet liquid attracted the insect to feast on him. The victim then died slowly due to dehydration, starvation, and shock.

Back in medieval Europe, thumbscrew was the first torture instrument to extract information from prisoners. The prisoner’s thumbs or fingers were placed in the vice and slowly crushed. It might cause a lot of pain, and sometimes the injuries from the crush can spread viruses and caused deaths.

The same animals were used in this punishment except in another way. The prisoner was securely tied in one place before several horses were released and trampled him to death. It took some minutes, and the condemn suffered from pain, shock, and both internal and external damage till death.