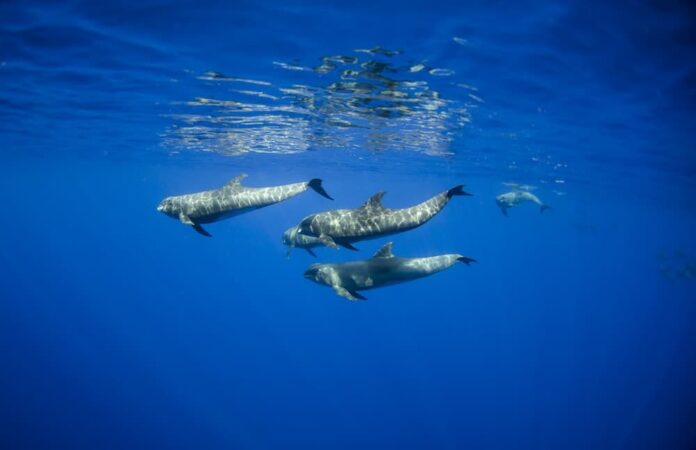 We all know dolphins very well, but not all of them come in the same size and appearance. As a matter of fact, some of them actually look like whales with their size and ways of hunting. That is why many of us think that those large dolphins are whales. To clear out this confusion, I am here to introduce you to 5 whales that are actually dolphins. Let’s take a look and see together if you know them as whales or dolphins.

These are the world’s fourth largest dolphins are thought to be whales as well. With their appearance and characteristic resemblance to that of killer whales, they are called false killer whales. These false killer whales also attack and kill marine mammals such as smaller dolphins as well due to their large size. However, they normally feed on fish, squid, and cephalopods although they consume larger forms of prey sometimes. You can find them in warm temperatures or tropical waters, and you can also see them throughout tropical oceans in the world as well. In contrast to their aggressiveness, sometimes they are also relatively playful and will approach boats and people with curiosity. As for threats, false killer whales face both natural and unnatural threats. Those threats include getting caught in fishing nets or hooks, overfishing, pollution from plastics and chemicals, and more.

Also known as Orcas, killer whales got their name because of their ability to take down large marine animals. Killer whales are actually dolphins, the dolphin species that have massive teeth which can grow up to 10 centimeters long. Orcas are the largest dolphin species, and they are on top of the marine food chain. These killers can weigh up to 6 tons, and they can grow up to 10 meters in size. Their population is widely distributed in the oceans and seas which surround most coastal countries in the world.

Killer whales are very social animals, and they live in groups called pods that consist of up to 40 members. There are two types of pods: Transient Pods (very aggressive) and Resident Pod (less aggressive and tends to prefer fish). Orcas hunt together in groups, and they feed on sea birds, squid, octopus, sharks, fish, seals, dugongs, and of course, whales. They have different techniques to catch prey: beaching to catch seals on land, working together to catch larger prey, etc. These large dolphins are one of the world’s most powerful predators, and they are very fascinating species.

Neither whales nor melons, this creature actually belongs to the dolphin family. The so-called dolphin has slim, torpedo-shaped bodies and conical heads. They don’t have a beak at all, and their faces are softly rounded and decorated with white markings on their lips. Just like most dolphin species, this one is also highly social animals as well. They can form close-knit herds consists up to hundreds or even thousands of members.

These dolphins are so friendly sometimes they hang out with other species like Fraser’s, rough-toothed, spinner, spotted, and bottlenose dolphins. Sometimes they even extend their friendliness to humans by bow-riding alongside boats as well. This species feed on a variety of diet, but mainly small fish, squid, and shrimp. You can find them in deep subtropical waters, and they only tend to come close ashore when the land steeply shelves into the sea. Their main threats are hunting and entanglement in fishing nets.

Both species of pilot whales including the Long-Finned Pilot Whales and Short-Finned Pilot Whales are both dolphins who thought were whales. This species is known to be the second largest whales in the world, and it can grow up to 6 meters. Pilot whales live in groups that can number from dozens to hundreds or even thousands of individuals. That is also how they got their name as pilot whales. That is because of an early belief that a pod of whales was led by a pilot or leader. You can find them in oceans worldwide; long-finned pilot whales prefer cooler water while short-finned pilot whales prefer tropical or subtropical waters. These large dolphins are carnivores, and they prey primarily on squid as well as octopus and several fish species. Despite their large population, both species also face threats which include hunting, bycatch, noise pollution, etc.

This species and false killer whales are definitely two different species despite their common name, yet both belong to the dolphin family. Seldom seen in the wild, this species usually live in warmer tropical and subtropical environments in and around the equator. The difference between them and most dolphins is the extreme aggression that is displayed toward other marine mammals. In fact, they have been known to attack other marine mammals, especially dolphins. Despite their aggression, this species also travel in groups as well, mostly between 10 to 30 or more during certain social events.

In spite of their aggressiveness, pygmy killer whales generally avoid boats. Also, they tend to become much more tightly packed when they are alarmed or feel threatened. The pygmy killer whales mostly feed on fish and squid, but sometimes they also add some dolphin species to their menu as well. Although comparatively widespread, this species is thought to be naturally rare. They prefer deep and warm waters, so it is very rare to find them onshore or near the coast. Their threats are accidental catches in fishing nets or other fishing gear.

Fun Fact: The babies of these mammals learn to hunt and consume solid food instead of milk.