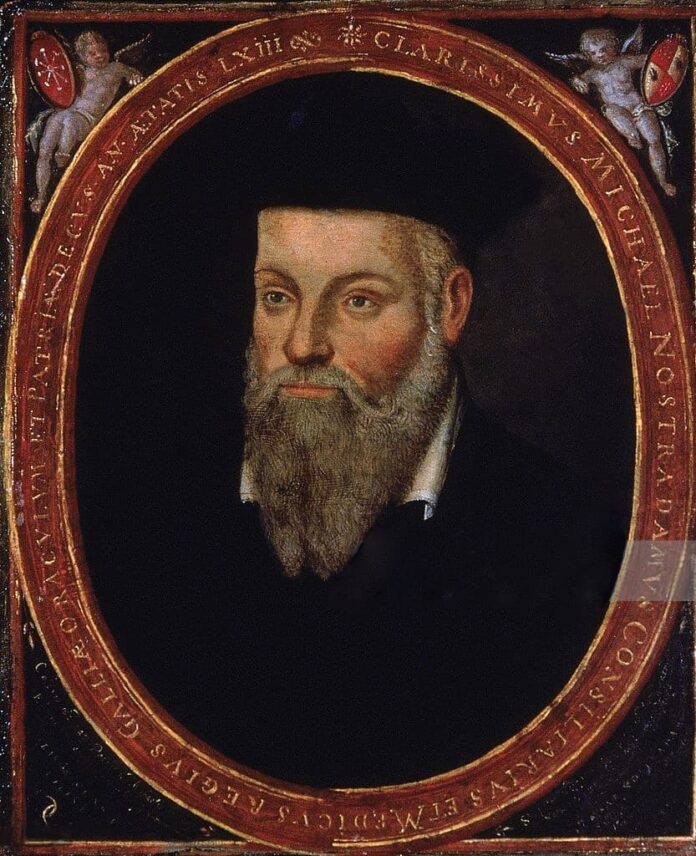 There is always something about fortune-telling and predictions about the world. Among them, Nostradamus’ predictions are the most well-known ones since his prophecies are unbelievably accurate. Another interesting thing about his predictions is that he predicts not just 10 or 20 years ahead, but hundreds of years.

Michel de Nostredame was born on the 21st of December 1503, and he passed away on the 2nd of July in 1566. He was a French apothecary with a reputation for publishing collections of prophecy that have become famous worldwide. His best-known book is Les Propheties (The Prophecies) whose first edition appeared in 1555. Most of his predictions are the major world events, events that cannot deny believing. He had already predicted a lot of events in a few hundreds years of time, long before we can tell what could happen. More than that, Nostradamus’ predictions are unique and fascinating for the fact that they come in poems. It is like a riddle for people in the next generation to solve if they really want to know what will really happen.

1The Great Fire Of London

“The blood of the just will be demanded of London,
Burnt by the fire in the year 66”

“The blood of the just will commit a fault at London,
Burnt through the lighting of twenty threes the six:
The ancient lady will fall from her high place,
Several of the same sect will be killed.”

The Great Fire of London was one of the most accurate predictions from Nostradamus. It was the event when fire swept through the central parts of England’s city, London. The fire occurred from the 2nd Sunday to the 5th Wednesday of September in 1666. During that time, the fire gutted the medieval city of London inside the old Roman City Wall. It consumed 13,200 houses, 87 parish churches, St. Paul’s Cathedral, and most of the buildings of the city authorities.

“From the enslaved people, songs, chants, and demands,
The princes and lords are held captive in prisons:
In the future by such headless idiots
These will be taken as divine utterances.”

“Before the war comes,
The great wall will fall,
The King will be executed, his death coming too soon will be lamented.
(The guards) will swim in blood,
Near the river Seine the soil will be bloodied.”

The French Revolution started in 1789 and ended in 1799, and it was the period of radical social and political upheaval in French and European history. That was when the absolute monarchy ruled France for centuries which later collapsed in three years. Back then, French society underwent an epic transformation as feudal, aristocratic, and religious privileges that evaporated under a sustained assault from liberal political groups. The masses on the streets also joined as well. That was when the old ideas about hierarchy and tradition succumbed to new Enlightenment principles of citizenship and inalienable rights.

“PAU, NAY, LORON will be more of fire than of the blood,
To swim in praise,
The great one to flee to the confluence.
He will refuse entry to the Piuses,
The depraved ones and the Durance will keep them imprisoned.”

Short but precise, this is one of the famous prophecies of Nostradamus which directly mentioned the name of the person. If you pay extra attention, you will be able to re-scramble the letters PAU, NAY, LORON to Napaulon Roy aka Napoleon Bonaparte. He was one of the most famous emperors of France, the bad one.

With Nostradamus describing him as “more of fire than blood”, we can tell that his rise was not a peaceful rise. Another accurate prediction is the last line of the verse. During the rise of Napoleon, he also imprisoned the Piuses of the third line including Popes Pius VI and VII. Exactly as what Nostradamus predicted.

“Lost, found, hidden for so long a time,
The pastor will be honored as a demigod:
Before the Moon finishes its full period
He will be dishonored by other winds.”

Louis Pasteur (27th December, 1822 – 29th September, 1895) was a French chemist and microbiologist born in Dole. His remarkable breakthroughs in the causes and prevention of diseases were what he was famous for. His incredible discoveries reduced mortality from puerperal fever, and also created the first vaccine for rabies and anthrax as well. During his time, his experiments supported the germ theory of disease. Also, he was best known to the general public for inventing a method to stop milk and wine from causing sickness. That was the process called pasteurization. His success brought him to be one of the three main founders of microbiology, honored as a demigod just like Nostradamus said.

“From the depths of the West of Europe,
a young child will be born of poor people,
he who by his tongue will seduce a great troop;
his fame will increase towards the realm of the East”

“Beasts ferocious from hunger will swim across rivers:
The greater one will cause it to be dragged in an iron cage.
When the German child will observe nothing.”

So Adolf Hitler was an Austrian-born German politician and the leader of the National Socialist German Workers Party aka Nazi Party. Interpreted by Nostradamus as the beast, Adolf Hitler and the German army went crossing over to capture France. He was the Chancellor of Germany from 1933 to 1945, and he served as head of state as Führer und Reichskanzler from 1934 to 1945. Hitler is most remembered for his central leadership role in the rise of fascism in Europe, World War II, and The Holocaust.

“The two greatest ones of Asia and of Africa,
from the Rhine and Lower Danube they will be said to have come,
cries, tears at Malta and Ligurian side.”

Might sound tricky and difficult to understand at first, but things became all crystal clear when the event happened. This was the prediction of World War II and the rise of Hitler. So World War II was a global military conflict that lasted from 1939 to 1945, and it involved most of the world’s nations. That included all of the great powers, and the two opposing military alliances; the Allies and the Axis. It was the most widespread war in history with more than 100 million military personnel mobilized.

In the state of “total war”, the major participants placed their entire economic, industrial, and scientific capabilities at the service of the war effort. The marked significant events involving the mass death of civilians including the Holocaust and the only use of Nuclear Weapons in warfare. With all of that, it was the deadliest conflict in human history resulting in 50 million to over 70 million fatalities.

“Near the gates and within the cities,
there will be two scourges the like of which was never seen,
famine within plague, people put out by steel,
crying to the great immortal God for relief.”

“The heavenly dart with stretch its course
Death in the speaking: a great achievement
The proud nation brought low by the stone in the tree
Rumors of a monstrous human, bring purge, then expiation.”

In August of 1945, the United States dropped two atomic bombs on the island of Japan; Hiroshima and Nagasaki. Those who escaped immediate detonation suffered painful radiation poisoning, and many died. ‘A stone in the tree’ in Nostradamus’ quatrain could describe the shape of the mushroom cloud that engulfed the sky above the city. Also, it could mean a land-bound object; like a stone or a bomb.

8Death of the Kennedy Brothers

“The great man will be struck down in the day by a thunderbolt,
An evil deed foretold by the bearer of a petition.
Another falls at night time.
Conflict at Reins, London and a pestilence in Tuscany.”

History has it, John Fitzgerald Kennedy, the 35th President of the United States, was assassinated at 12:30PM on 22nd Friday, November, 1963. He was fatally shot while traveling with his wife Jacqueline, Texas governor John Connally, and Nellie in a Presidential motorcade.

5 years later, the assassination of Robert F. Kennedy, took place shortly after midnight on the 5th of June, 1968 in Los Angeles, California. Earlier that evening, RFK was declared the winner in the South Dakota and California presidential primaries in the 1968 election. The shoot was at midday, and he was pronounced dead 26 hours later.

“The penultimate of the surname of Prophet
Will take Diana for his day and rest:
He will wander because of a frantic head,
And delivering a great people from subjection.”

On the 31st of August, Diana, Princess of Wales, died as a result of injuries sustained in a car collision in the Pont de l’Alma road tunnel in Paris, France. Her boyfriend, Dodi Fayed, and the driver, Henry Paul, were also pronounced dead at the scene of the accident. The only survivor of the incident was Fayed’s bodyguard, Trevor Rees-Jones. The blame was entirely put on the chauffeur, who lost control of the car at high speed while under the influence of alcohol.

“Volcanic fire from the center of the earth
Will cause trembling around the new city:
Two great rocks will make war for a long time.
The Arethusa will redden a new river.”

“The sky will burn at forty-five degrees,
Fire approaches the great new city.
By fire, he will destroy their city,
A cold and cruel heart, blood will pour.
Mercy to none.”

On the morning of 11th September, 2001, hijacked planes crashed into Two Towers of the World Trade Center in New York City. Scholars interpret forty-five degrees as a either a reference to New York City’s proximity to the 45th latitude or that the burning buildings would fall, creating a 45 degree angle to the ground even though they collapsed onto themselves. Both towers collapsed within two hours, destroying nearby buildings and damaging others. There were no survivors from any of the flights, and that was one of the biggest tragedies in history.