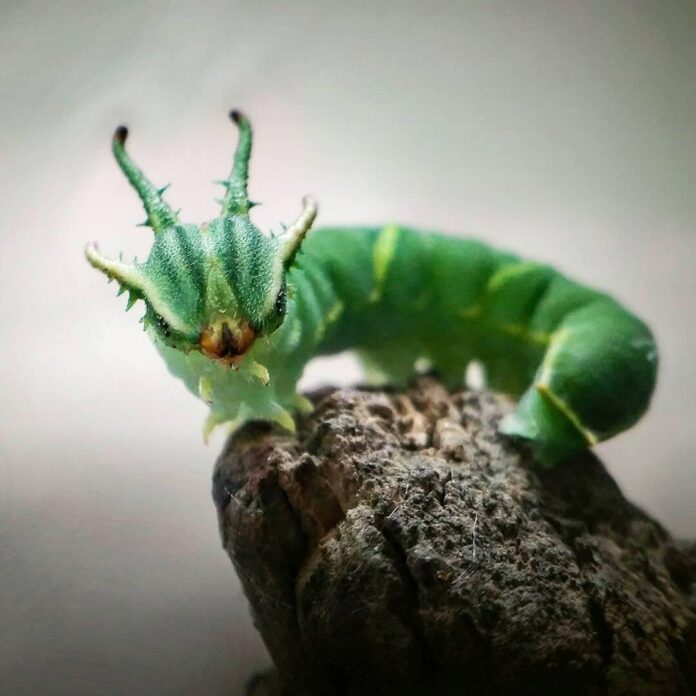 As kids, not all of us are fans of worms or caterpillars since they are scary-looking while others are unsafe to touch. However, there are cute caterpillars out there as well. When it comes to cuteness, the caterpillars that we are going to see are absolutely adorable. The unique thing about cute caterpillars is that they are colorful and fluffy, and they have cool names. In case you are in search for some cuteness for the eyes, take a look at the 10 cutest caterpillars on our list below.

The name definitely tells something about this caterpillar, Dagger. You can find them in the east of the Rocky Mountains and places around North America from spring to early autumn. You can tell that they are American Dagger Moth Caterpillar by their long bunches of black bristles. The bristles extend from the body to the rear of the caterpillar.

Most of the time, the caterpillar lives in neighborhood trees like oak, ash, elm, alder, willow, and maple. Kids love to touch and pick them up due to their cuteness while forgetting to think about the consequences. If you touch the bristles, they will break off and embed in your skin which delivers toxin that causes a stinging sensation.

Known as the largest native moth in Native America, the larvae or the caterpillar at their young stage is also large in size. The larvae of these moths are found on maple trees as well as cherry trees and birch trees. The interesting thing about these caterpillars is that they have colorful tubercles that make them look super adorable. On top of that, the colors of their body and the tubercles change as they grow which is even more fascinating. These chubby caterpillars are safe to touch and pet, so you don’t have to worry when getting in touch with them.

Like who would ever think that a caterpillar could be so hairy? And dangerous, though. Flannel Moth Caterpillar aka Puss Caterpillar looks like cotton balls with their long hair. The hair includes venomous spines that can cause a painful string along with inflammation. Such symptoms will last for several days while the other times the string causes headache, nausea, and shock-like symptoms. Some people joke that “Never touch anything that looks like Donald Trump’s hair”, and this caterpillar is the perfect example of why.

Cuteness overload, Japanese Emperor Caterpillars are totally irresistible; pretty much anything from Japan is kawaii. The caterpillar looks half caterpillar half baby deer, and it is like the cutest caterpillar ever. As they become butterflies, their beauty remains the same. Also, the Japanese Emperor Butterfly is the national butterfly of Japan; totally support this. In case you wonder, these cuties are absolutely safe to touch and pet.

Hairy and fuzzy, the Milkweed Tussock Moth Caterpillar is one adorable creature to look at. As an instar, the caterpillar appears to be more gray; and that gives them one unique appearance in nature. The moth usually uses milkweed and sometimes dogbane as larval host plants, and that is how they got their names.

Bear in mind that these caterpillars are cute to look at but not to touch. Direct contact with hair, body, and cocoons of the caterpillars can cause irritations on the skin. That can develop rashes; however, it is nothing dangerous but just be careful when you see them.

Looking as if wearing a cool great shirt, Saddleback Caterpillar is super adorable to see. The middle part of the body is green, and the ends are brown and spiny along with a white-ringed brown dot in the center. Also, the caterpillar has a fleshy horn on either end. Just so you know, the body of the caterpillar bears urticating hair that contains irritating venom.

Contacting with the hair will result in painful and swollen rashes and sometimes nausea. Remember to remove the hair immediately to avoid the venom from spreading. Not just the caterpillar itself that is venomous, its hair and cocoon are also the same.

Spicebush Swallowtail Caterpillar is the unique caterpillar that has two large eye-like shapes on top of its head. That is part of the defense mechanism that keeps the prey like birds away from them. Most caterpillars are large in size, and they usually stay on the leaves till they turn into butterflies. Unlike some of our venomous caterpillars, this one is safe to touch and pet.

image: Why Evolution Is True

Squeaking Caterpillar aka Squeaky Walnut makes a funny sound when it senses danger. Usually, the sound from this caterpillar type is like the mimicking the cries of smaller birds, squirrels, and mice. When there are large predators nearby, the caterpillar makes the sound to make those predators flee. They also make the sound even when gently touched by our fingers, and that is somehow adorable. These caterpillars are so cute, and the sound they make is also nice as well.

It is not impressive to look at this caterpillar from above because the beauty lies in the front view. The Paddle Caterpillar has these tiny antennas that look like paddles alongside its body. Most of them are dark in color, and there is a large colorful sphere shape from the head to the end. Cute and adorable, The Paddle Caterpillar is totally one of a kind.

Goes by many names, Woolly Caterpillar, Isabella Tiger Moth, or Wollybear, this caterpillar is one cute scary kind. There are 8 types of them, and each of them is born with bristly and dense hair on their entire bodies. The caterpillar does not inject venom, and they are also not urticant since they don’t cause irritation, injury, inflammation, or swelling. However, it is better not to touch them because their sharp and spiny hairs may cause dermatitis in some people.

When disturbed, this type of caterpillar will defend itself by rolling up into balls and remaining motionless. After a while, they will quickly crawl away from the scene. The cool part is that there is a folklore that lies in Canadian and U.S’ beliefs related to the caterpillar.