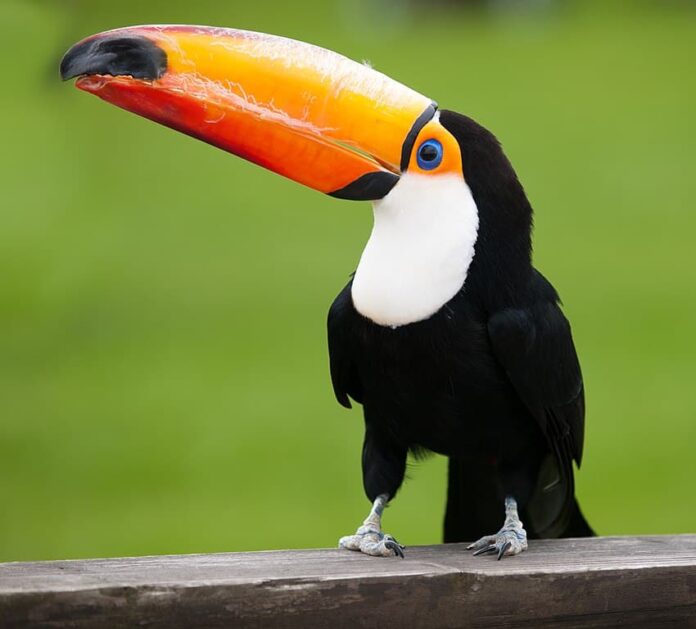 Birds are one interesting animals to know about for the fact that they could fly, but there’s more. We are looking at some of the birds with large bills that somehow make them even more beautiful to look at. The bill of the birds play very important part in their feeding, well obviously. Then you might question, what is the difference between beaks and bills.
So beaks are common in birds that mainly feed on meat while bills are common in birds that feed on water creatures. As for the appearance, beaks are pointed and rounded at the end and bills are flat and rounded on the end. Below are 5 birds with large bills that you really should see, so don’t forget to check them out. Let us know what you think!

This is one beautiful bird with large bill that not many people know. Collared Aracari is native from Southern Mexico to Panama as well as Ecuador, Colombia, Venezuela, and Costa Rica. This bird is a member of the toucan family, and their coloration is very unique and attractive. Collared Aracari usually lives a small flock consisting of 6 to 15 birds that move through the forest with a rapid direct flight. This species is a fruit eater, but they also feed on insects, lizards, eggs, and other small prey. A single collared aracari rests in cecropia trees, while their family lives around the lodge.

Hornbill is a large bird family with many members, and most of them have very interesting bills. Great hornbill is the largest member of the Indian subcontinent, and of course, they have impressive bills as well as colors. The most prominent feature of the hornbill is the bright yellow and black casque on top of its massive bill.

These birds feed on many types of fruit, but figs are their important food source. Apart from fruits, great hornbills also feed on small mammals, birds, small reptiles, and insects. Usually, they forage along branches and move by hopping and looking for insects, nestling birds, and small lizards. The birds then use their bills to tear up the bark and examine the prey before catching, tossing in the air, and swallowing it.

Now, great hornbills are evaluated as vulnerable due to the decline of their population. Just like most birds, the numbers of these birds have gone down due to habitat loss and hunting in some areas. You can find them in Indian Subcontinent and Southeast Asia, and the declines in population are mostly in Cambodia.

Fun Fact: Hornbills are the only birds with eyelashes.

Roseate Spoonbill is a wading bird that is native to South America and east of the Andes. With the attractive bright pink color, this bird is one fascinating species. Not different from flamingos, Roseate Spoonbills get their pink coloration from the food they eat, mainly crustaceans and aquatic invertebrates. The bill of this looks like a spoon, and it allows the bird to easily sift through the mud. The menu of this bird consists of crustaceans, aquatic insects, frogs, newts, etc.

Looking fierce and angry all the time, shoebills are one interesting bird to look at. As you can see, the bill of this bird almost looks like a large shoe in front of its face. This tall bird lives in freshwater swamps of central tropical Africa from southern Sudan to eastern Congo, Rwanda, and Uganda.

The bill of shoebill is a lethal tool that can do harsh things to its prey. After having the prey’s body into its beak, the shoebill then opens its bill just enough for its victim to poke its head out. Guess what happens next. The shoebill then clamps down again with its knife-edged bill and removes its prey’s head before swallowing the rest.

Another interesting thing about this bird is that it is normally silent for the fact that they are solitary. But when they do make noise, it sounds like a machine gun it could totally freak you out. That usually happens during breeding season when they need to communicate with each other. Shoebills make a resounding clapping noise with their bill to attract a mate, and scare the hell out of some small creatures.

When it comes to birds with large bills, toucan is always on the list. The noticeable thing about toucans is their brightly marked and large colorful bills. In the family, Toco Toucan is the largest of them all. Their bill is about 19 centimeters long which is a third of the bird’s total size, yet the bill is very light. The cute part is that they tuck their bills under their feathers to keep them warm when they sleep.

Toucans use their bills to pluck and peel fruit which is their main food source. Inside the bill is a flat tongue of the same length as the bill that helps toucans to catch insects, frogs, and reptiles. Sometimes the toucans also eat the eggs of the other birds as well. With their bills, they will be able to reach deep into tree holes to access food that other birds cannot reach.

Toucans are native to the Neotropics from Southern Mexico through Central America into South America to Northern Argentina. These birds mostly live in lowland tropics, and they spend most of their time in trees. Despite the fact that they spend a lot of time in trees, they are not very good at flying. Toucans mainly travel among trees by hopping, and they can fly only in short distances.

The interesting thing about bills is that they tell how the bird feeds with just the shape of the bills themselves. There are several types of bills and how the birds of those bills feed below such as: