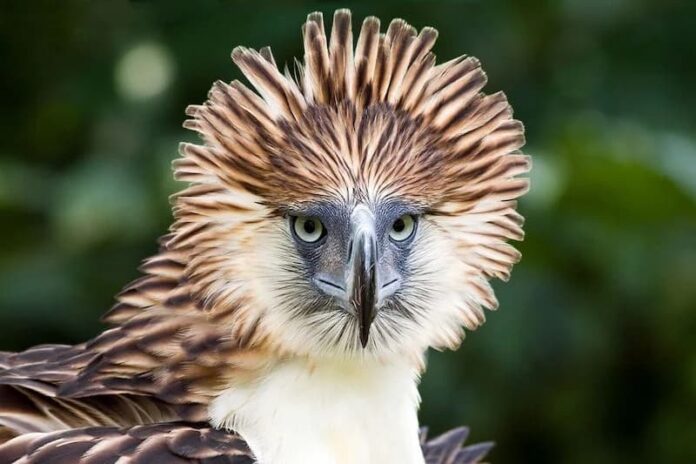 With the reputation of being the most powerful and aggressive raptors, African crowned eagles are very fierce birds of prey. You can find them deep within the African bush and rainforests of tropical Africa where they live and hunt. The way they hunt is like leopards as they rely on stealth to get close, then accelerate at speed towards their prey. This leopard of the sky is so swift and ferocious they regularly kill prey heavier than itself. They can prey on antelope more than seven times their own body weight.

Also, they can swoop after monkeys and bushbucks at 160 kilometers per hour as well. On top of that, their talons and feet are so powerful they can crush the skulls of monkeys or antelopes in one blow. Crowned eagles are the only eagle species that successfully hunt monkeys, mangabeys, and baboons. While some eagles grab their prey and carry it off, this one goes straight for the kill. The sad thing is that these incredible birds are now classified as near threatened due to habitat loss. A few other factors that affect their population are hunting, and losing food sources.

Prey: None (they feed on carcasses)

Mostly depicted as evil characters in cartoons and animations, the Andean Condors are a very common species that we know. These vultures have very sleek-looking velvety black feathers along with distinctive white flight feathers surrounding their neck. Considered the largest raptors and birds of prey, Andean condors have an enormous wingspan of 3 meters with a weight of up to 15 kg. Because of their weight, they are not excellent flyers despite their impressive wingspan. That is why these vultures prefer windy areas where they can glide effortlessly on the air currents.

The Andean Condors inhabit Andean mountain region as well as coastal areas where they can enjoy the sea breeze. You can also find them in some desert areas where they take advantage of the thermal air currents as well. No matter where they live, the condors are primarily scavengers and they feed on carrion. They prefer large carcasses of deer or cattle. Their population nowadays is near threatened due to habitat loss and secondary poisoning from carcasses killed by hunters.

Not every vulture out there can have the reputation of being a powerful bird of prey since most of them are scavengers. Things are different with the bearded vulture aka lammergeier, the most metal birds in the animal kingdom. This species eats mainly carrion, and lives and breeds on crags in high mountains in Southern Europe, the Caucasus, Africa, Indian Subcontinent, and Tibet. These raptors are also scavengers whose diet consists of bone and bone marrow. Once they find a picked-over carcass, the bird will drop it from a tremendous height to shatter it into swallowable pieces. The acid concentration of the bearded vulture is so strong it can digest and dissolve large bones within 24 hours.

The unique thing about this vulture is that they don’t have a bald head like most vultures out there. More than that, they carry the food that includes the limbs of sheep and other small mammals to the nest during the breeding season. Unlike other vultures, they feed their young with food instead of by regurgitation. The interesting part does not end here, the wild lammergeiers rub soil into their feathers to look more intimidating. But to prey, with or without the soil, these large vultures always look fearful to them. The sad thing is that people hunt them to the brink of extinction before with the belief that the vultures would carry off babies. Nowadays, they are the Least Concern as their number is coming back.

As for the California condors, they are the largest flying bird in North America with a wingspan reaching 3 meters. The incredible thing about them is that they can travel up to 150 miles per day in search of dead animals to scavenge. On top of that, they can eat over 1 kg of food at a time, and then go for days without eating anything. Despite the fact that they don’t have sharp talons, they have long powerful beaks that can tear through tough hides. That is why California condors are also among the most powerful birds of prey in the world.

These large vultures do not have a good sense of smell, but they have excellent eyesight which helps them to prey. You can find them in the forests, rock shrubland, and oak savannahs of California, Arizona, Utah and Baja California, and Mexico. Back in the late 1970s, the California condors were close to extinction with a few dozen birds in existence. By 1987, there were only 10 California condors living in the wild. Their main threats are poison ingestion, lead poison, illegal egg collection, habitat loss, and power lines. Currently, there are around 400 of them around the world now which is a good thing.

This owl species is one of the largest owls, and of course, among the most powerful birds of prey. You can find them in mountains and forests of Europe and Asia as well as in the northern parts of Africa. These owls love to make their homes in areas where food is most plentiful so that they can easily hunt. That is why they prefer living in a wide variety of terrains like forests, isolated farmlands, and landscapes featuring high cliffs. As birds of prey, they usually fly above high cliffs while hunting for preys that wander on grassy areas below. Since they are such powerful birds of prey, they have no real natural enemies. Their only threats are electrocution, collision with traffic, and shooting.

Also known as American harpy eagles, they are the largest and most powerful raptors in the rainforest. Harpy eagles are so large they look like people wearing a bird costume, yes these eagles are huge. These large birds of prey are native to Central and South America, and they prefer to hang out in the canopy treetops or lowland tropical rainforests. Since they are big, they also require big trees and wide territories in order to flourish their numbers as well. Looking pretty intimidating, harpy eagles also have the largest talons of any eagle with a size of 13 centimeters.

These powerful birds of prey use their large and strong talons to quickly crush the bones of their prey. Also, those talons are so strong they can snatch up a 7.7 kg monkey out of trees without missing a beat. More than that, harpy eagles have an excellent vision that allows them to spot prey at the distance of 200 meters away. Ranking at the top of the food chain, their main threat is hunters who shoot them for sport. Apart from that, logging and deforestation that have destroyed their nests and habitats are part of their population decrease.

These vultures are as large as the American condors with an impressive wingspan of 3 meters with weight of up to 14 kg. This raptor is so aggressive that it is known to attack other predatory animals to keep them away from carrion. Also, these dominant birds are powerful enough to drive off a jackal with their large powerful beak. That beak is so strong it can tear hides, tendons, and other coarse tissue that may be too tough for other scavengers. The lappet-faced vultures live throughout Africa and the Middle East in dry savannah, desert, or semi-arid areas.

They prefer areas with only short grass, thorn bushes, and scattered trees as well as on open mountain slopes. The couples build their nests in the canopies of large thorn trees so that they can easily protect their young. These vultures dominate all the other birds of prey near the source of food, carrying out some displays like bounding attacks. Also, these vultures are normally silent but they grunt, hiss, growl, and yelp at feeding sites. Their main threats are poisoning and poaching, and they are classified as endangered by the IUCN.

Native to sub-Saharan Africa, martial eagles are the largest eagles in Africa with wingspans up to 260 centimeters long. At the same time, they are also the sixth heaviest eagles in the world as well. These eagles are so big they can kill a small antelope known as duikers for meals easily. This species live wherever food is abundant and the environment is favorable. Most of the time, they prefer habitats that are semi-desert and the open savannah where they can easily spot and hunt prey.

Martial eagles hunt mostly in flights by circling high above their territory and then stooping sharply to catch their prey by surprise. On top of that, these eagles are so strong they could break your arm and carry away young children. They have strong talons that can snap a human arm, but the good thing is they rarely come close to people. Martial eagles are one of Africa’s most incredible hunters, yet the sad thing is they are endangered now.

Here you are looking at the national symbol of the Philippines, the Philippine eagle who is also among the most powerful birds of prey. Also known as the monkey-eating eagle, this large bird is one of the rarest birds in the world. These birds have amazing eyesight, and they can see 8 times the distance that the human eyes can see. You can only find them in the Philippines, especially on four major islands including Leyte, Luzon, Mindanao, and Samar. The home of these eagles is the forest, particularly lush dense forests where they can hunt and prey on wild animals.

Just like most powerful birds of prey on the list, this one also stays on the top of the food chain in the Philippine islands. They are dominant hunters, and their flight is fast and agile while their talons have super strong grips. The Philippine eagles have two hunting techniques: Still-Hunting and Perch-Hunting. These birds are monogamous, and the parents take care of the young until they can survive on their own. Philippine eagles are not endangered due to shooting, trapping, and habitat loss as a result of deforestation.

Found in Russia and Japan, Steller’s sea eagles are the heaviest eagles in the world with a weight of up to 9 kg. That is not doubt why they are also one among the most powerful birds of prey on our list. Just like their name suggests, this eagle species lives near water, especially on narrow strips of the coast and forested areas along lower reaches of rivers. You can easily recognize them by their very large yellow beaks and sharp yellow talons that stand out the most as they fly.

Another interesting thing about them is their wide field of binocular vision as well as monocular vision. That means they can use their eyes independently or together depending on what they are looking at. Their favorite meal is fish especially salmon and trout as well as crabs, shellfish, squid, water-dwelling birds, and carrion. Just like all raptors out there, this one clamp onto prey with their switchblade talons without letting go until the prey is dead. Their current population is now only around 5,000 and decreasing due to habitat loss, contaminated fish, and hunting.