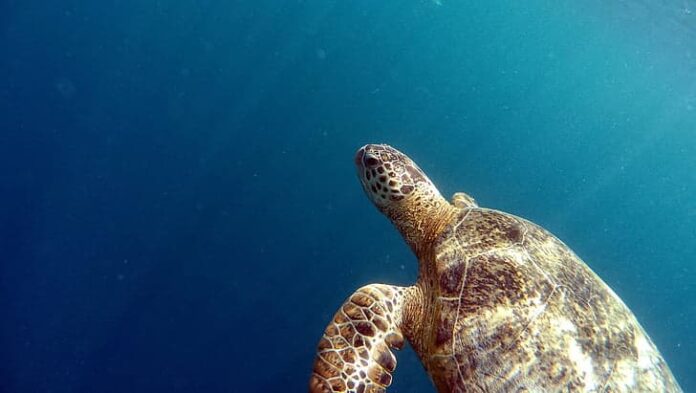 Turtles are one of the living dinosaurs in the world today, but do you know about the largest turtles? These ancient animals appeared on earth 220 million years ago, and of course, they are one of the oldest animals. There are 228 living turtle species along with 124 subspecies currently, and we are going to discuss the largest turtles today. Most of the turtles in our list below are aquatic animals, and many of them are critically endangered despite their longevity. Let’s take a look and see how many of the largest animals you know are on the list.

This species is the smallest of all sea turtles, but they are one of the largest turtles in the world. At the same time, this one is also the world’s most endangered sea turtle as well. You can find them in shallow areas with sandy and muddy bottoms where they nest in a unique way. These sea turtles nest in mass synchronized nesting called arribadas (Spanish for arrival). Kemp’s Ridley nest 2 – 3 times each season, and they lay an average of 110 eggs in each nest. As for their diet, they have powerful jaws that help them to crush and grind crabs, clams, mussels, and shrimps. Their greatest threat is human’s activities including the collection of eggs and the killing of adults and juveniles for meat and other products.

Ranking number 7, Flatback turtles live primarily on the continental shelf of Australia and nest only on Australian beaches. You can easily notice them by the shape of the carapace (upper shell) which is flatter; hence, how they got their name. Also, their carapace is thinner than that of other hard-shelled sea turtles as well. These large turtles are omnivorous, so they forage on the sea bed and feed on corals, seaweed, sea cucumbers, shrimps, jellyfish, and mollusks.

The interesting thing about them is that the females lay unusually large eggs, larger than those of all other sea turtles. The eggs hatch after about 6 weeks, and the hatchlings make their way toward the sea instinctively after hatching. Both small and large, the threats to this species are the loss or development of nesting sites, habitat loss, and light pollution. Entanglement in fishing nets is also one of the major causes that provoke their deaths as well. Apart from that, egg collection by indigenous people is also among the biggest threats to their population.

Also goes by the name of green sea turtle, the black sea turtle is one of the largest turtles that roam the oceans. You can find them throughout tropical and subtropical seas around the world, especially in the Atlantic and Pacific Oceans. The adults usually inhabit shallow lagoons as well as bays, and they mostly feed on various species of seagrasses. The juveniles of this species are carnivorous, they eat fish eggs, mollusks, jellyfish, small invertebrates, worms, sponges, algae, and crustaceans. This species is now endangered, and it is illegal to collect, harm, or kill them. In fact, there are laws and ordinances to protect their nesting areas in some countries. These turtles are still in danger because of human activities, and their other threats are pollution, fishing net entanglement, and habitat loss.

The narrow and pointed beak has brought this turtle species the name hawksbill turtle. Apart from their unique beak shape, they also have a distinctive pattern of overlapping scales on their shells as well. Those overlapping scales form a serrated look on the edges which is unusually astounding. The hawksbill turtle is found mainly throughout the world’s tropical oceans, especially in shallow lagoons and coral reefs. Because of their narrow beaks, they mostly feed on sponges by using the beak to extract them from crevices of the reef. Sometimes they also eat sea anemones, mollusks, crustaceans, sea urchins, fish, and jellyfish as well. Their hard shells protect them from many predators, but they still fall prey to large fish, sharks, crocodiles, and octopuses. This species is now critically endangered due to human impact as people kill them for flesh and their stunning shells.

Here you are looking at the largest species of freshwater turtles that can be found in southeastern parts of North America. These large turtles inhabit rivers, lakes, canals, and swamps, and only the nesting females venture onto open land. Alligator snapping turtles have been around for at least 20 million years, and their jaws and ridges are similar to the skin of an alligator. The interesting thing about them is that these turtles are one ferocious reptiles with strong beak-like jaws and large claws.

With super strong jaws, these alligator snapping turtles have one of the strongest bites of any animal. Their jaws are capable of crushing our bones, and we should never handle them in the wild. That is why there have been reported cases where human fingers have been cleanly bitten off by them. The decline of their population is due to the exotic pet trade, over-harvesting of their meat, and habitat destruction. This species is now threatened, and there are fewer than 900 of them in wild nowadays.

Meaning “one and only”, the Aldabra giant turtle can be found on Aldabra island in the Indian Ocean and Madagascar. This turtle species has stocky and heavily scaled legs to support its heavy body. As for the neck, it is very long so that they can exploit tree branches up to a meter from the ground easily. In the wild, they inhabit scrubs, mangrove swamps, coastal dunes, and grasslands. There used to be 18 species of giant turtles on the island, only this species survive extinction. Their major threats on top of their vulnerable status now are the introduction of predators, lack of food, climate change, and habitat loss. Without the treats, this turtle species can live up to 255 years while 120 years is their average life span.

With powerful jaw muscles, these turtles need large heads to support them so that they can crush hard-shelled prey easily. You can find these oceanic turtles throughout the world except in the coldest seas far north and south near the poles. They spend most of their life in saltwater and estuarine habitats, and females only come ashore to lay eggs. As for their diet, loggerhead turtles are omnivorous so they feed on both meat and plants. Their meal includes gastropods, bivalves, decapods, sponges, corals, sea pens, sea anemones, cephalopods, barnacles, isopods, starfish, jellyfish, and many more.

The fascinating thing about them is that they migrate huge distances between their feeding grounds and their breeding-nesting sites. In fact, a female loggerhead turtle may travel over 12,000 km every two or three years back to the beach where she hatched. That will also be the same beach where she will lay her own eggs as an adult. Nowadays, this species is in the vulnerable class with an estimation of 60,000 nesting females left in the world. Their threats are pollution, entanglement in fishing gear, artificial lighting, climate change, and habitat loss.

Here you are looking at the largest turtles in the world, and the fourth heaviest modern reptiles. You can find them in all tropical and subtropical oceans, and their range even extends into the Arctic Circle. Apart from being the largest turtles, they also have the most unique look as you can see on their shell. Instead of having a hard carapace like other turtles, the shell of this species is covered by skin and oily flesh. That is not all, leatherbacks are also the deepest-diving turtle as well since they are capable of reaching 4,000 feet underwater. Despite the fact that they are huge, their jaws are relatively fragile so they feed primarily on soft-bodied invertebrates like jellyfish. The leatherback turtles are now vulnerable, and their threats are entanglement in fishing gear, egg harvesting, ship strikes, pollution, and habitat loss.