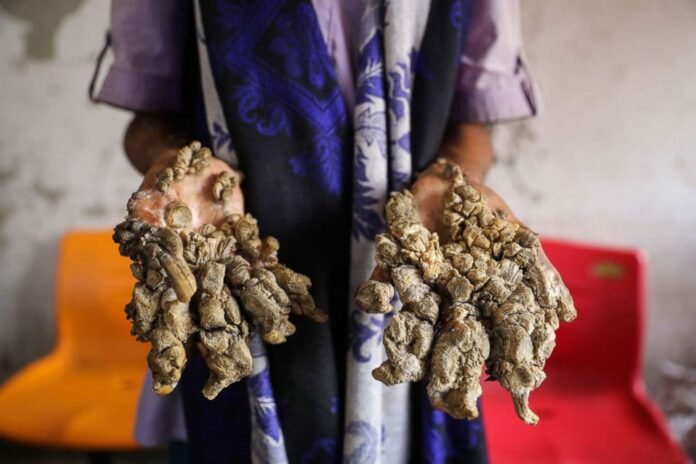 Now, this is the medical condition that you really should worry about, it is among the most dangerous conditions. Alien Hand Syndrome (AHS) is a rare neurological disorder in which a person experiences their limbs acting seemingly on their own. That means your hands move without your intention, and you don’t even know that the hands are moving. Such a condition happens due to a brain hemorrhage or brain surgery.

An example was a 77-year-old woman who came to the hospital with a complaint about her unusual hand. Her left hand was moving without her knowledge while watching television, and it even stroked her face and hair as if someone was controlling it. Such a condition is rare of course, but it often freaks out the patients. And just like most medical conditions on the list, this one also has no cure.

Trimethylaminuria aka Fish Odor Syndrome is a genetic disease that often presents from birth. The cause of this syndrome is the mutations in the FM03 gene or a result of an excess of proteins in the diet. Another cause is the increase in bacteria that normally produce trimethylamine in the GI tract, or liver disease, or kidney disease.

A person can tell that he/she has fish odor syndrome by the offensive body odor that smells like rotting fish. The smell usually exists in the urine, sweat, and breath of the person with this syndrome. The worse thing is that no matter how often you shower, use deodorant, or other ways, the smell doesn’t go away.

The smell can be either mild or strong, and it has nothing to do with personal hygiene. The problem is from the enzyme deficiency that prevents the breakdown of trimethylamine (TMA) which is the byproduct of protein released by gut bacteria. A person with fish odor syndrome has a defective enzyme that causes the TMA to release through breath, sweat, and urine.

There is no cure for this medical condition, but there are ways to reduce the odor through diet. The person should consume a low protein diet that restricts the amino acid choline like fish, eggs, beans, and organ means. It would be bad news if the affected person like green vegetables because they make the smell get worse. Drinking more water also help, and hopefully, there will be a cure for this in the future.

You won’t hate shaving anymore when you see people who suffer from Human Werewolf Syndrome. It is a medical condition that causes abnormal hair growth all over the body, especially on the face. This syndrome either presents at birth or occurs later in life as the person grows up. Also, it happens regardless of age or sex, and the length of hair can be either short or long.

Back in the old days, people who had this syndrome often worked as circus performers, barbers, or any jobs that make the best of their appearance. Human Werewolf Syndrome causes emotional burden as well as a cosmetic embarrassment because it has no cure. In some cases, this syndrome carries in every member of the whole family which somehow means it exists in the gene.

Congenital Insensitivity to Pain (CIP) is another rare condition in which a person cannot feel physical pain. Some of you might think this is good but actually feeling physical pain is vital for survival. That is why CIP is one of the most dangerous medical conditions that cause deaths, especially from childhood due to unnoticed injuries. Burn injuries are among the common injuries in this kind of condition.

Without the sensitivity of pain, we will not be able to be aware of any damage caused to our bodies at all. That counts both internal organs and external body parts, and that is bad. You can walk with broken bones or lose your arm without a single pain, how does that sound? This condition also presents from birth, but they can feel the difference between sharp and dull or hot and cold. However, they won’t know if their body parts are burning or injured. Treatments are not available yet for this condition, so it is a long way to wait.

As for this one, it is also one of the rare medical conditions that cause a child’s body to age fast. Progeria causes the child to have the characteristics of an elderly person with diseases as they age. That includes blood pressure, wrinkled skin, heart disease, stroke, and many more.

This condition affects about 1 in every 4 million births worldwide regardless of sex and race. The kids who suffer from this medical condition have the behaviors of kids at their age, with an older look. Most kids with Progeria do not live past the age of 13 due to the development of diseases and their weary bodies. Those who get to live longer than 13 can live up to 20 years, but they are very frail.

Speaking of rare and strange medical conditions, nothing can top this one. Pupula Duplex is a condition that is manifested as an abnormality of the eyeballs. People who suffer from this condition have two irises and two pupils in the same eye as if they have two eyes in an eyeball. The thing is this condition is not well-documented or real, but there are people who claim to have the condition.

It is a very rare brain condition that causes the person to see everything upside down. This case is so rare that only one person is suffering from this spatial orientation phenomenon. Bojana Danilovic, a 32-year-old woman from Serbia is the only person with a neurological syndrome like this one. The thing is that her eyes see the images the right way up but her brain changes them.

At work, she uses an upside-down monitor every day as well as reads newspapers or books upside down. At home, she rests in front of an upside-down television stacked on top of the normal one that her family watches. There have been a few similar cases back in the old days, but Bojana is the only person to experience this in modern days. The good thing is the manages to lead a normal life till now, so it is all okay.

Fibrodysplasia Ossificans Progressiva (FOP) aka Stone Man Syndrome is an extremely rare (1 in 2 million) genetic disorder. Such a condition is characterized by ectopic ossification of the skeletal and connective tissues leading to progressive fusion of the axial and appendicular skeleton. Long thing short, it turns an individual’s soft tissues into bones over time. It is a progressive genetic disorder that causes the muscle to turn into bones which cause joints to fuse together. When that happens, the person will be impossible to move around. There have been around 700 confirmed cases now in the world, and the cure is still not found yet.

Epidermodysplasia Verruciformis (EV), also known as Tree Man Syndrome is among an extremely rare medical condition and skin disorder. This condition is associated with a high risk of carcinoma in the skin as well as skin cancer. The worse part is it results in excess growth of scaly maples on hands, feet, face, and other parts of the body. People who suffer from Tree Man Syndrome have difficulties in walking and doing daily activities due to the bark-like growths on their bodies. Until today, the cure to such syndrome is still under research waiting for the results.

Have you ever felt like living is like dying? That is still normal, the worse case is when a person suffers from Walking Corpse Syndrome. It is a rare mental illness in which the person feels the delusion that he or she is actually dead. That usually occurs due to the dysfunction in areas of the brain which leads to emotional detachment. It removes the sense of physical identity that makes them feel like they don’t exist.

Many people with this syndrome starved themselves to death as their state of mind seems dead to them. The cause is more like severe depression that makes the person feels like they are rotting away. There are also symptoms including anxiety, hallucinations, hypochondria, guilt, and preoccupation with self-harm or death. Graham, a man who has lived with this syndrome for 9 years said that it was the closest he could come to death.

He was the first person with walking corpse syndrome to undergo a brain scan. Doctors found activity levels in large areas of his frontal and parietal brain which involve motor, memory, and sensory function. The levels were extremely low which resembled a person in a vegetative state, according to Medical Daily. Graham’s brain function resembles that of someone during anesthesia or sleep, therapy is the only cure for this condition.

Related Post: Dangerous Diseases That Can Kill You Fast