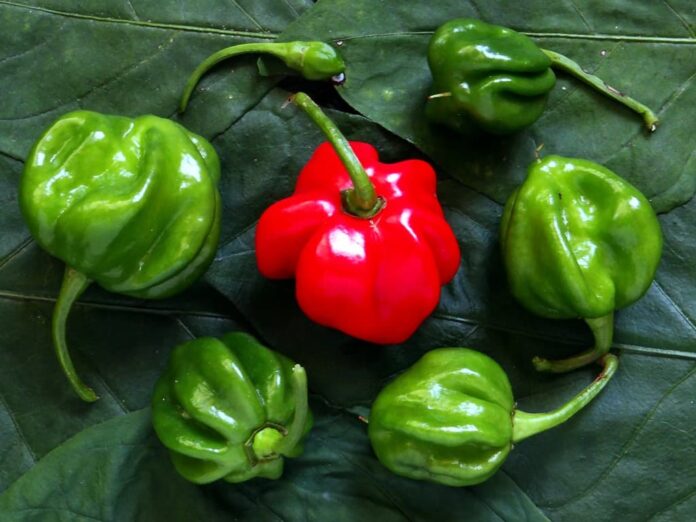 Want to challenge yourself with some hottest chili peppers? Then take a look at the list of 10 hottest chili peppers in our list below to see if you can handle them. As a matter of fact, there have been many people who gave it a try; and the result was not so pleasant. Some have gone to the hospital while others have had pain in parts of their bodies for days. But if you are up to the challenge, then pick one of the hottest chili peppers here and let us know.

Note: The measure of the spiciness of chili is SHU (Scoville Heat Unit) so let’s see which one is the hottest.

Used to be the hottest chili in the world, Red Savina held the record for over 10 years back in 1994. This type of chili has a brilliant red color with intense heat that can make you sweat with just a small bite. It is extremely hot, but with sweet heat that stays quite long in your palette. Also, if you handle this chili raw, your hands will also feel the heat as well.

This hot chili pepper got its name from its ability to heat up 7 pots of stew with just one pod. It is a rare and extremely hot chili with wrinkly and pocked skin that looks nothing hot. If you are an extreme eater, this chili is actually a tasty type with a fruity taste. But with the reputation of heating seven pots of stew, the wicked heat is quite challenging.

This is one of the hottest chili peppers among the 7 Pot Peppers, and it is super hot. If you compare this one with the one above, 7 Pot Barrackpore has bigger heat and is less sweet. Its size is also bigger, and its taste is a little more bitter than other peppers. People usually use them for extreme hot sauces and salsas to heat up the taste.

Bhut Jolokia aka Ghost Pepper is one of the hottest chili peppers in the world since it is 400 times hotter than Tabasco sauce. These peppers are often used as food and spice as well as a remedy to summer heat in both fresh and dried. Also, northeastern Indian smeared these peppers on their fences as a safety precaution to keep wild elephants at a distance.

Naga Viper is a very rare pepper cultivated in the UK, and it is a hybrid of many different peppers. It took years of cross-pollination to create these super hot peppers to win a place in the hottest chili peppers. The farmer who is responsible for this pepper says that it is dangerous and invigorating to eat them at some point.

Some said that the burn from this pepper is like you swallowed a thousand suns. Extreme eaters love these hot peppers due to their mega-heat, fruity flavor, and wicked looks. Yup, the tip of the pepper resembles a stinger of a scorpion and that is how it got its name. The advice is to never eat them raw or without a lot of dilution because these peppers are super hot.

The cross between Naga Morich and 7 Pot Pepper created this super hot chili pepper. It has a fruity or floral flavor with, of course, extremely hot along with red, orange, or yellow colors. The look of the peppers already screams heat, and the taste is not any cooler. The perfect word to describe the taste of 7 Pot Promo is pure fire fruity flavor if that makes sense.

The unique thing about this pepper is that it is one of the hottest chili peppers with the best flavor. Also, it is the only hottest chili pepper that is not red in color. Its color is rather brown or chocolate, and its taste is scorching hot. You can eat them fresh, dried, powdered, or on any food if you are an extreme eater.

A bite does not seem so bad, but then it heats and heats till the nasty burns fill your body. Comes straight from hell, this chili pepper is one of the hottest with heat that never stops building. It might not have a stinger like some of the others, but its hotness is not something bearable.

Being the hottest chili peppers with the ugliest look, Carolina Reaper is said to be 500 times hotter than Tabasco. This pepper is red and gnarled with a small pointed tail at the end. For now, it is the hottest chili peppers in the world with the spice and taste that can send you straight to the hospital. No kidding, a few have already experienced ambulance ride results from hellish challenges with these hotties.