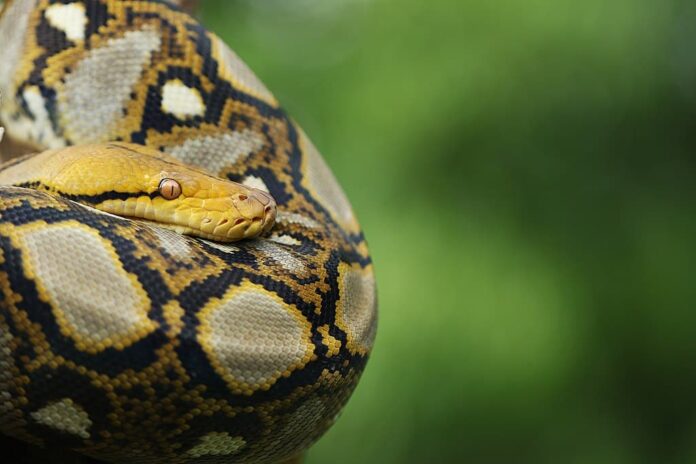 Just because these legless reptiles are non-venomous, does not mean they are harmless. There are only 5 dangerous non-venomous snakes out of 2,700 species that can harm humans, fortunately. Snakes have different defense mechanisms and ways of killings their prey either with or without venom. That is why we have to make sure that we don’t mess with the wrong snakes at the wrong time. In case you wonder what the dangerous non-venomous snakes are, let’s find out with us below.

Not everyone is aware of this species, but the African rock python is one of the most dangerous non-venomous snakes in the world. This type of python is very large, and you can find them in the tropical African savanna. Plus, they are also the largest snakes found in Africa so they are not so safe to be near at all.

The only thing that makes them dangerous to humans is their size and powerful body. If the snakes are larger and stronger than us, there are always chances that they can harm us. These pythons prefer living near large bodies of water, and there have been a few attacks recorded so far.

This python is not commonly seen by people at all, but they are also among the largest snakes. Amethystine pythons are also the largest native snakes in Australia and Papua New Guinea. The thing is that this type of python is not venomous, so they are not considered dangerous to humans at all. However, they can be bad-tempered at times, and their small sharp teeth can cause nasty wounds.

Colorful and eye-catching should not be the things that change the fact that Burmese pythons are dangerous non-venomous snakes. No one knows how large can they can be, but the largest ones nowadays are 8 meters long with a weight of 403kg. It is the largest Burmese python, and it is also the heaviest snake as well.

Despite their beauty and world records, these pythons also have high numbers of attacks and deaths on humans. Just so you know, they can take down animals like large alligators and deer. So these dangerous non-venomous snakes are not afraid to attack humans if we provoke them.

Anaconda is one of the well-known snakes as they appear in movies, songs, and some books. As for green anacondas, they are the largest snakes in snake species in spite of their shorter length. This type of anaconda is a beautiful reptile that originates from the swamps and marshes of the Amazon and Orinoco basins.

Green anacondas can be very large and heavy, but they are actually docile. The one thing that you can be sure of is that they don’t attack humans first unless provoked. This species of anaconda is strong enough to prey on big boas and other large animals they can find. There have been only a few cases of actual attacks on humans from them, at least we know they are the least dangerous non-venomous snakes.

Some people fear pythons while others don’t because these snakes are usually slow and non-venomous. This type of snake can grow so big and large, and they become stronger as they grow large. Not to mention that the reticulated python is also the longest snake in the world, so at least they can make us jump.

Professionals said that these non-venomous snakes are very calm and easy to care for unless it is feeding time. Snakes this large definitely have the experience of killing people, indeed. Reticulated pythons are large and aggressive, and that is a very dangerous combination that makes them dangerous non-venomous snakes.

As you can see, large snakes have strong muscles that can break bones without even trying. The thing is that this type of snake doesn’t usually attack people unless they are too hungry or provoked. You can find them in tropical forests of Myanmar, India, Indonesia, the Philippines, and other countries in Asia.

Related Post: Extremely Venomous Snakes To Stay Away From