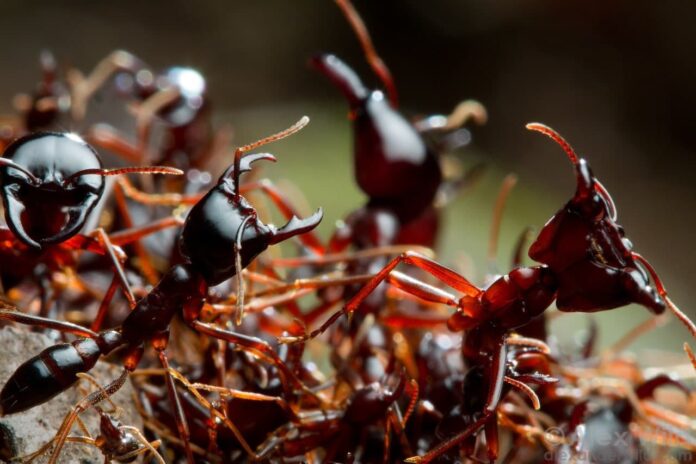 There are times when we thought that small insects are harmless to us big humans. But think again, there are many dangerous ants out there that have the power to take our lives with their colonies. Yes, we are talking about the most dangerous ants in the world today; the types of ants that we should stay away from. The one good thing about these dangerous ants is that they usually live in the wild instead of sharing the house with us.

There are more than 12,500 species of ants in every continent except ANTartica, but only several are very deadly. There will be 10 most dangerous ants in our list below, so let’s see how dangerous they can be.

These are very dangerous ants to humans since they always attack in groups. The ants are usually very aggressive, and they keep migrating in the ground from place to place. Army ants are dangerous because of their sword-like stingers half the size of their body. The surprising thing is that the workers of army ants are blind, so they are not afraid to attack anything in their way. Usually, these ants attack victims that are way larger than them fearlessly. These ants are fast, and their attack usually causes boundless panic which allows them to kill their prey easily.

Noticed as the most dangerous ants in the world by Guinness World Records, they have caused a few deaths so far. These ants are extremely aggressive, and they show no fear of us humans. Not to mention that they sting a number of times in quick succession with more venom within each bite, you really should stay away from them.

During the attack, bulldog ants will hold on to their victim with long, toothed mandibles, then curl their body underneath. These ants have large eyes, and they are not afraid to strike and attack if you provoke any sign of disturbance in them. If you are not quick enough to escape, the stings from these ants can kill you within 15 minutes only. Plus, they can jump several inches. So let’s just not go anywhere near these dangerous ants.

Bullet ants are not only among the most dangerous ants but also the animals with the most powerful sting. Those who have experienced the sting said that it is equivalent to being shot. The sting from bullet ants will cause pain as well as affect the nervous system which might cause muscle spasms.

That is not all, the pain from the sting sustained by the victim for over 24 hours. The sting from bullet ants cannot kill you unless you are allergic. Its venom causes horrible pain which is followed by waves of burning, throbbing, and continuous pain for hours. Also, these ants don’t attack unless provoked so at least that is good news to know about.

It all begins when a newly mated queen gets attracted by the scent of the acacia tree and started nesting inside one. The queen nibbles into the thorn to lay 15 to 20 eggs to produce the first generation of workers. This type of ant looks like wasp except they don’t have wings, and they have very large eyes. The stings from bullhorn acacia ants can produce a pulsating effect and can be very painful on our skin.

If you disturb a tree full of these dangerous ants, they will not hesitate to attack you in great numbers; very aggressively. Most of them do not only run down the trunk to the ground to attack but also jump out of the tree onto you as well. Let’s just stay away and not get bitten by these ants, the pain is not pleasant.

Fire ants are common ants that people in Southeast Asia often find sharing the house with them. There are over 200 species of fire ants, and the common thing that these species share is the burning skin effect after stings. The stings from fire ants are terribly painful, but they don’t usually look for trouble. However, if they bite you as a group, that can be dangerous due to the alkaloids in their venom.

After the bites, the allergic reaction on our skin can cause swelling and irritation of the spot. The thing is that fire ants bite only to get a grip and then sting to inject a toxic alkaloid venom. Mostly, deaths from these ants are because of allergic reactions. One fire ant can sting multiple times, and that is why these dangerous ants are harmless to small children and pets.

These ants harvest seeds from plants and store them underground in their nest, and that is how they got their name. The fascinating thing about these ants is that they possess the venom that is found in cobra and western honey bees. The ants use venom as a defense mechanism to kill animals like horned lizards. If these little ones can kill a lizard, they are also harmful to us humans as well. The sting from these ants is excruciating, and the area around the sting goes deep in red color with sticky secretion coming out.

Green Tree Ants or Weaver Ants are known for their unique ability to build nests by weaving leaves using larval silk. Their colonies can be extremely large as they consist of more than a hundred nests spanning numerous trees which more than half a million workers. These ants don’t sting, but they have powerful and painful bites that feel like piercing to the skin. One ant cannot kill you, but their whole colonies can so be careful.

Goes by many names, Jack Jumper Ant is also known as Jumping Jack, Hopper Ant, or Jack Jumper. The species is the type of venomous ants that are active during the day, and they prey on small insects. The ants live in open habitats by nesting in bushland, woodland, and dry open forests which are surrounded by gravel and sandy soil.

These venomous ants have been known to kill about four people between 1980 and 2000. Jack Jumper is dangerous to humans because their sting can cause a mild reaction that leads to allergies. The symptoms include increased heart rate and falling blood pressure. A single bite from the ant is not serious, but these ants usually travel in groups. These ants have a retractable stinger in their abdomen that is attached to a single venom gland.

If there is no sign of an allergic reaction, you can use an ice pack or spray on the affected area to relieve the pain. These ants are often found in rural areas, so carefully check to make sure you don’t camp near their nest.

The name is not so persuasive enough to make people believe that they are one of the most dangerous ants. Pony Ants aka Green-Head Ants are well known for their metallic appearance which varies from purple to even reddish-violet. The stings from these ants are very powerful and can cause intense pain to humans. Bear in mind that the venom can fall victim to anaphylactic shock which is an allergic reaction. It can cause itching, vomiting, and swelling; and it can lead to death if not treated properly.

Siafu Ant, Dorylus, Driver Ant, or Safari Ant, is one of the most dangerous ants in the world. These ants usually move in a swarm of millions of ants per nest, and they cut and eat anything that stands in their way. These aggressive ants have powerful rugged jaws that can tear apart the prey in just seconds. Siafu Ant stings, but their fierce shearing jaws are their main weapons.

Worker siafu ants have bigger jaw sizes with greater strength as well as stinging capabilities. This type of ant does not have a nest, they swarm around to look for food. The colony will stay put for a couple of days only when the queen has laid eggs. These ants don’t chase you since they are too busy minding their own business. Siafu ants only attack if you stand in their way. Their bites are very painful, and they are powerful enough to attack larger creatures like snakes and lizards.

Related Post: Most Dangerous Insects That Can Kill You