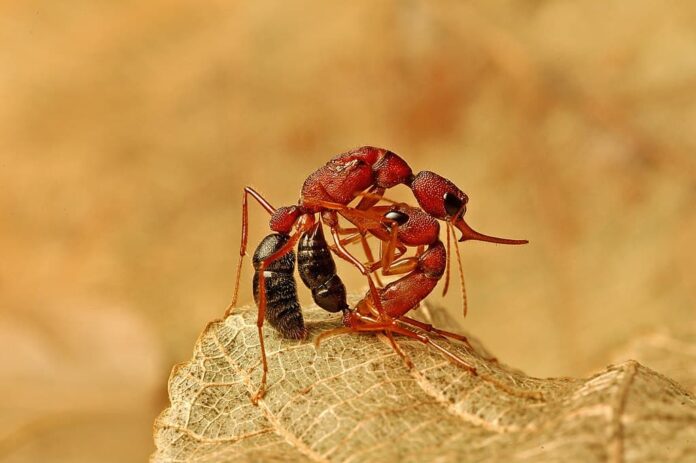 Insects are known to be small and easy to defeat, but these deadliest insects on today’s list are different. We all have experienced ant bites or mosquito bites which is not a big deal at all. However, if you come across one among these 10 insects right here, expect the unexpected.

Some of them attack in groups, while others inject venom or parasites into your body. Read about them carefully and make sure you remember their faces. Take a look at the list below and let us know your thoughts.

You can find these ants in Equatorial Africa, but let’s just wish you won’t meet them. They have the largest colony among other ants or insects on our beautiful planet. How large? Only about 22 million members in each colony. They have wonderful teamwork since they can skeletonize a human in a few hours. It is hard to run away from them once they attack you know. That is because they start inside out which means they bite your internal organs first. They have strong mandibles that they are good at using, and no animals would wanna mess with them.

The only good thing about black widows is that they don’t bite unless they feel threatened. But when do bite, the end is near. They have neurotoxic venom that can cause deaths if not treated right. The case is likely to be worst if the victim has heart conditions. At least black widow’s bite is curable which is great. The habitat of the widows is in Southeastern Europe.

This is the most cringy thing to know about. So bot flies have larvae babies known as internal parasites of mammals. Female bot flies laid eggs within the skin of mammals!!! Human is also a mammal. Well, if the eggs are in our skin, these larvae will live beneath our skin which causes horrible effects. You would feel their movement underneath your skin if they were there. It takes 60 days for the larvae to grow up, and they will leave the body when they’re fully developed. Central and South America is their habitat.

Spiders are never kind, and this one right here is the most venomous spider in the world. You can find them in random places like cars, homes, or in bananas. Yes, bananas. Have you ever imagined having a healthy diet, and the see the deadliest spider from your food? That is terrifying. Their habitat is in Tropical South and Central America. So their venom can leave the victim paralyzed, while sometimes it can cause loss of oxygen. This spider’s venom also provokes breathing problems, loss of muscle control, inflammation, and intense pain. Just stay away from spiders.

Among ants, bullet ants are the largest. They are found in rainforests, and their sting hurts. Actually, the bullet ant’s sting is not venomous, but the pain lasts for one whole day. 24 hours to be exact. The sting can kill only if you have an allergic reaction to the sting which is a rare case. Well, you might have seen Coyote Peterson did the experiment of getting stung by a bullet ant. It was absolutely painful, but he survived. Sometimes the pain causes paralysis and shaking for days as well, it’s better to stay away from these ants.

People also called them Giant Japanese Hornets, and their habitat is in East and Southeast Asia. They can grow up to 2 inches, about a size of a human thumb. These hornets are very aggressive, and their colony consists of around 700 members. The venom of the hornet can cause kidney failure and death. There was this unfortunate victim stung by the hornets, resulting in sting holes the size of quarters! Even after 2 months, he was still hospitalized.

Yup, these ants can jump. And with the size and length of its body, you can tell that it’s not friendly. I feel bad for people in Australia, a lot of the deadliest animals just go camping there together. Jumping ants are aggressive, and they can sting through the very thick fabric without a problem. The pain from its sting is compared to a mild electric shock, which is painful. They mostly live near gum trees, and you will high chance of meeting them during summer.

Reside in New Zealand, these spiders are true killers like their cousin, the black widows. The venom from the katipo spider can spread throughout the body in just minutes. Victims will experience different symptoms which get serious as time goes on.

See that name over there? Killer bees won’t mess around, and they can kill you if they want to. They travel in a group of 80000 members at least. Their native habitat is in Piracicaba and Brazil, but they’re also touring in the United States now recently. The attacking strategy of these bees is repetitive stinging in their favorite places like faces and eyes. You can run as fast as you can, but their swarm will follow you more than a mile. Good luck with that!

No, they don’t kiss you. But the bad news is they suck blood from your body to survive. The name was given because they love to bite human lips while they’re asleep. If you’re allergic to the bites, you might have skin irritation and redness. Some bites can also lead to Chiga’s disease. Now what is it? So Chiga’s disease results from feces of the kissing bug entering the human bloodstream. If you live in the United States or Latin America, especially in Arizona, be careful.