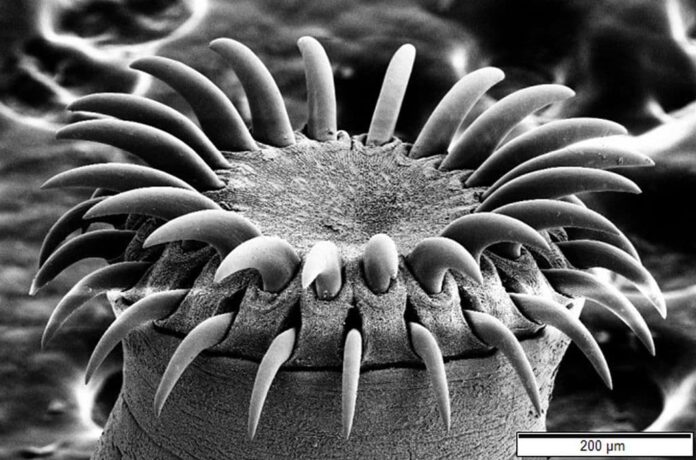 There are a lot of things to watch out for, and deadly parasites are one of them. While dangerous animals kill us in a painful way, parasites have their own way to finish us. From the ones that feed on our flesh to the ones that feast on our minds, the damages are pretty ghastly. We are going to explore some of the deadliest parasites in the world and what they can do today. So let’s find out with me below.

Its formal name is Naegleria Flowleri, and this single-celled parasite is very dangerous. It can cause a rare brain infection called “Meningoenphalitis” which leads to severe brain inflammation. At the same time, it also causes other neurological symptoms so the fatality rate is 100%. This dangerous parasite lives in soil and warm bodies of water such as lakes, hot springs, ponds, rivers, and swimming pools. It enters human bodies through the nose as the person dives or swims in the contaminated water.

The sudden entry of the water into the nose allows this amoeba to travel deep into the nasal cavity. It can travel via the olfactory nerves, and the initial symptoms will start to appear in less than a week. The patient may have a fever, headache, nausea, stiffness in the neck, and vomiting. As the parasite moves toward the brain, the symptoms will develop into hallucinations, loss of balance, and seizures, before coma and death.

Note: This parasite cannot live in saltwater, and it cannot survive in properly treated swimming pools. Also, you cannot be infected by swallowing the contaminated water because its only entry is the nose.

Dracunculus aka guinea worm disease is caused by one of the longest nematodes infecting humans. The larvae of the parasite develop inside the body of the copepod that ingests it within 14 days. Once the humans drink the infected water containing these tiny water fleas infected with larvae, everything begins. Our stomach will dissolve and kill the copepod, but the parasite migrates through the mammalian intestine wall and enter the abdominal cavity.

A female worm can grow up to a meter long before it emerges through the skin after a year of infection. Usually on the feet or legs, it causes the formation of a blister on the skin’s surface. Once the blister starts to rupture, the worm will slowly emerge which takes several days or weeks. This process causes severe pain and irritation to the patients.

The only way to get the worm out, and that is to gradually wrap it around a stick. To do so, the patient has to submerge the affected body part in water to coax the worm out. Then, put a slight pressure on the worm as you slowly pull it out of the wound. Should there be any resistance from the worm, stop the pulling to avoid breaking it. There is no vaccine or other way to prevent this infection at the moment, so this is the only method.

One of the worst parasite infections is the one that takes months or years to grow inside our bodies. The eye worms are one of them, and it infects us through repeated bites from deerflies. Adult larvae can travel through our body tissue for years. Wherever it reaches, we will experience itching and swelling as symptoms. Even worse, it can even cause brain damage. The patients notice only when it is too late as the worm reaches the eye. “I can feel it as it squirms across the soft tissue beneath the cornea of my eye.”, according to one victim.

Surgical removal of adult worms is one of the methods to get rid of the infection. Along with that, there is another medication that uses diethylcarbamazine (DEC) to kill microfilariae and adult worms. If DEC does not work, the other way is to use Albendazole. Because there are no vaccines to protect us from loiasis, consuming DEC once a week can reduce the risk. Should you travel to certain rainforests of Central and West Africa, you need to have DEC with you. DEET repellents also help, so don’t forget to bring both.

Here you are looking at parasitic worms that infect human small intestine. There are two species that infect humans which are Ancylostoma Duodenale and Necator Americanus. These parasites live in the soil of warm and moist climates, especially in areas with low sanitation levels. Those who walk barefoot on the contaminated ground face the risk of infection as the larvae attach and penetrate through the skin.

The light symptoms include itching and localizing rashes while the serious cases are abdominal pain, anemia, appetite loss, and diarrhea. There are also advanced symptoms such as cardiac failure, extreme weight loss, indigestion, and vomiting. The symptoms are worse with children, but there are effective medications available to treat the parasite. Also, the best method to prevent infection from hookworm is to avoid walking barefoot on the soil.

This parasite causes a parasitic disease known as Leishmaniasis from the bite of phlebotomine sand flies. Different people have different symptoms which range from none to severe. According to CDC, there are several forms of Leishmaniasis in people but the most common one is Cutaneous Leishmaniasis. This form causes skin sores which are usually painless, and it develops within a few weeks or months after the bite. The sore can change its appearance and size over time, and it may end up as ulcer.

There are two other forms which are Mucosal and Visceral Leishmaniasis. Mucosal Leishmaniasis is the least common form, and it only happens when the parasite spreads from the skin sore to a mucous membrane. The most dangerous form is Visceral Leishmaniasis because it can cause swelling in the liver and spleen. Even worse, it can also affect bone marrow which leads to anemia and low counts of white blood cells and platelets.

Just like most deadly parasites, there are no drugs or vaccines to prevent this infection. The only way is to be careful from sand fly bites, especially for travelers. These flies are most active from dusk to dawn, so make sure to cover yourself when you go out. Another way is to apply insect repellent to the exposed skin and under the ends of the sleeves. The most effective repellent for these flies is the one that contains chemical DEET.

The World Health Organization (WHO) considers this the second most socioeconomically devastating parasitic disease in the world. Also known as Blood Flukes, Schistosoma derives from freshwater snails found in lakes, ponds, and standing bodies of water. Humans contract the parasite when the skin comes in contact with contaminated freshwater. The parasites can penetrate the skin of those who bathe, swim, wade, and wash in the contaminated water.

The flukes attach themselves to the patient’s skin and literally drill their way into the body. They then reside in the intestinal tract where they begin to produce large numbers of eggs. The eggs usually travel to the intestine, bladder, or liver which causes inflammation or scarring. Within days after the infection, the patients may develop a rash or itchy skin. Along with that, some may experience chills, cough, fever, and muscle aches after 1 or 2 months.

The infection can last for years, and it can cause a lot of damage to the bladder, liver, lungs, and intestine. There are effective drugs available to treat this infection if you discover it on time. In case you travel to areas where Schistosomiasis occurs, you may be at risk. Check with your doctor if you went to some areas in Africa, the Middle East, Southeast Asia, Southern China, and the Caribbean.

This is one of the most common parasites whose name we are familiar with. Tapeworm is a flat segmented worm that lives in the intestinal tract of animals. It enters and infects the livestock after the consumption of the contaminated water. This parasite spreads to humans via the consumption of raw or uncooked meat from infected animals. The most common meats are beef, fish, and pork. As it continues to grow, it can block intestinal ducts which can lead to eye damage, muscle damage, and seizures. In more severe cases, it is also capable of causing damage to vital organs such as the brain, heart, and liver.

Common symptoms include abdominal pain, diarrhea, hunger, general nausea, weight loss, and more. The symptoms depend on the body parts where the eggs hatch. Once the egg hatches, the larva forms cysts in the host’s tissue. So it can be in the brain, eyes, spinal cord, and more. Cysts in the brain and spinal cord can lead to balance problems, confusion, headache, seizures, stroke, or even death. The treatments for these are medication or surgery, depending on the conditions of the patients.

This is a soil-based parasite that infects hundreds of millions of people per year. It transmits to people via contaminated soil, dirty hands, fruit, and vegetables. Once it entered the body, it resides in the large intestine and causes light or heavy infections over time. The light infections, patients are usually asymptomatic which means there are no symptoms. As for heavy infections, the common symptoms are painful bowel movements that contain a mixture of blood, mucus, and water. In a more serious case, the patients will experience bloody diarrhea, extreme nausea, headaches, severe weight loss, and vomiting.

The most common and effective treatment for a whipworm infection is anti-parasitic medication. Those include Albendazole and Mebendazole as they can get rid of any whipworms and whipworm eggs in the body. The patients need to take the medication between one to three days, and the side effects are minimal. To prevent whipworm infection, according to heathline.com, you should: