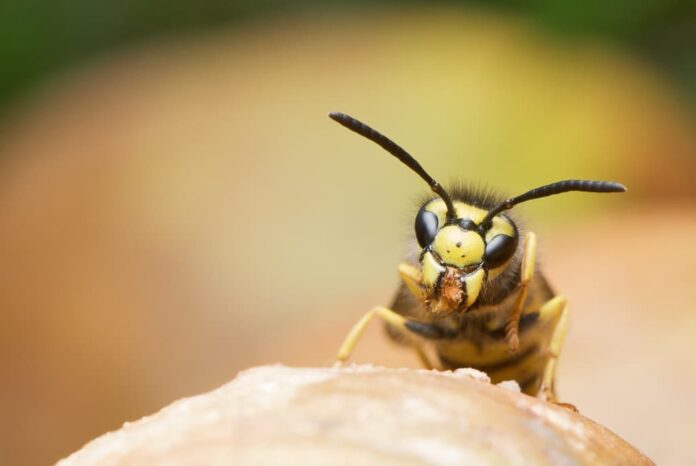 It is true that all wasps are dangerous, but it is good to know which one to avoid at all costs. The most dangerous wasps are the ones that cause excruciating pain right after the sting. No matter if you hang out in the park or go on an adventure, there is always a possibility of meeting one. Despite the fact that wasps only attack when provoked, learning more about them is a good thing.

Wasps are dangerous because they can sting you over and over again, endlessly. One sting from one wasp is painful enough, not to mention they do attack in swarms sometimes. This is why I am here to introduce you to some of the most dangerous wasps today. You will find the 10 most dangerous wasps in the list below, let’s see how many of them that you know.

Go by the name Japanese Giant Hornet and Murder Hornet, Asian Giant Hornets are also the world’s largest hornets. These insects spark some fear as two of them were found in the United States, northwest Washington to be exact. So how dangerous is the sting from an Asian giant hornet? According to Shunichi Makino, who studies bees and wasps, a sting from this hornet is like being stabbed by a red-hot needle. That is not all, the aftereffects are severe swellings and continuous pain that lasts for a few days.

Just like other wasps, these “murder” hornets do not attack unless provoked. As long as you steer clear from their nests which are around rotten pine roots, you will be okay. Back to where their original home is, Asian giant hornets cause between 30 to 50 deaths per year. Most of the fatalities are from allergic reactions rather than the toxicity from the venom. In some mountain villages in Japan, people eat fried larvae of giant hornets as snacks and more. This is among the reasons for the deaths each year.

Looks like a scary robot, bald-faced hornet is already the insect that you don’t want to pet. You can easily recognize them by their predominantly white-patterned face. Another distinctive appearance that they possess is the two crossed lines on their faces. While most wasps have black and yellow bodies, this one has a black body instead. This type of wasp gets its name as a hornet because of its large size and aerial nest.

By the name, you can already that these wasps are bad news. The executioner wasps are one of the most dangerous wasps in the world with an extremely agonizing and potent sting. Even their appearance says “Run”, as they are the largest Neotropical wasps of their own genus. As for the nests, they like to build them in trees as well as in small corners of home roofs.

Surprisingly, the executioner wasps are not a very aggressive wasp species despite their excruciating sting. In some cases, the sting can cause swelling for days along with a small hole in the sting area. As if the painful sting is not enough, the executioner wasps also have mandibles with teeth. Their mandibles are helpful when it comes to obtaining wood fibers to build nests, capturing, and macerating the prey.

Just like the name suggests, red paper wasps have a reddish-brown color on their bodies and heads. These dangerous wasps have the reputation of large nest construction along with their painful sting. They build their nests in protected areas like hollow trees and woodlands. However, there are cases where they build their lovely home near humans which are the undersides of roofs.

This type of wasp is not so aggressive, and they only sting when provoked. Also, only the females can sting while the males do not have the ability to sting at all. The sting from red paper wasps is very painful, and even worse, there are even lasting effects. Although rare, their venom may also provoke a serious allergic reaction in those who are highly allergic to wasp’s venom.

Fact: Paper wasps are attracted to things that resemble pollination objects, their favorite things. So there is a chance that they will land on you if you wear floral clothing or sweet-scented perfumes.

A flying insect that preys on large creepy crawlies like tarantulas is the insect to fear. Apart from being one of one the most dangerous wasps, they are also among the largest parasitoid wasps. That means they are the type of wasp that use their sting to paralyze their prey to use as living food. The female attacks tarantulas with a painful sting, drags them to the den, and lays an egg inside them. As the egg hatches, the larva will eat the still-living prey.

Each tarantula hawk has long legs with hooked claws that it uses for grappling with its victims. This also helps with the delivery of one of the most painful stings in the world thanks to their extremely large stingers. The pain lasts about 5 minutes or longer, and it is described as shockingly electric and unrelenting. Apart from the pain, there is no other danger or requirement for medical attention after the sting which is good. Despite the fact that tarantula hawks are quite docile, many animals avoid eating them.

While most dangerous wasps out there stay close and protect their nests, yellow jackets like to hang out around us. You will find these bright yellow and black insects in picnic areas, in the backyard, and in other outdoor places. As for their nests, some of them build it underground while others are in trees or between walls. You never know when you walk across an underground nest because the entrance is so small. This is why accidental attacks occur when innocent passerby walks near their nests.

Even if you don’t disturb their nests, yellow jackets will still come to you. Usually, these wasps look for protein sources in our picnic food, especially in June or July. Just like most of us, hamburgers, soda, and similar things attract their attention. Not to mention that they are also active in hot and dry climates, summer reunites us all.

While most dangerous wasps attack when provoked, yellow jackets don’t need a reason to do so. With their gifted mandibles that are super strong, they can get a good grip before stinging. These insects often bite to get a better grip and then jab their stinger in, multiple times. The poisonous venom can cause sudden pain along with inflammation or redness around the site. You will need to seek medical attention if you experience breathing problems, coughing, diarrhea, dizziness, throat tightness, vomiting, or wheezing.

How To Treat Wasp Sting

How To Avoid Wasp Stings