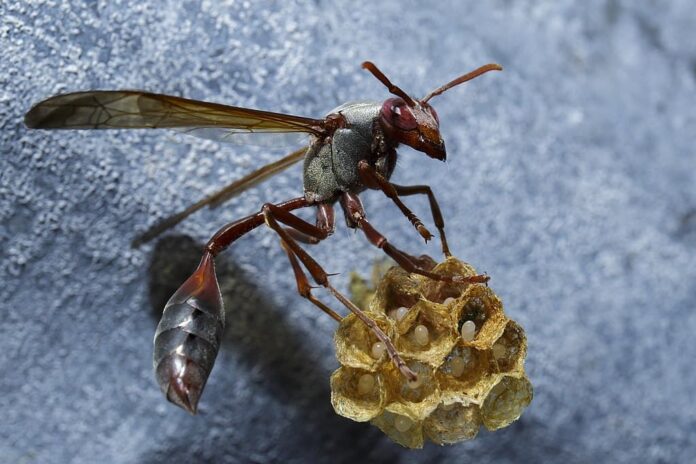 Consider yourself lucky if you think getting stung by a bee is painful. Painful stings are at greater levels when you get to experience some of the insects on our list today. Justin O. Schmidt, an insect expert created the Pain Scale for stinging insects that we can totally trust. How? He let those insects sting him on purpose so that he could rate the pain on his scale for us. Also known as the King of Sting, this man has gone through enough stings to write his book The Sting of the Wild. Below is the list of insects that give the most painful stings that none of us want to experience. Learn their names, remember their faces, and keep your distance from them.

With the appearance of a robot, this insect is clearly one scary creature to fear. This stinging insect is found throughout North America, and they are not hornets. People called them so because of their large size, these insects are actually wasps. Also known as Bull Wasp, this so-called hornet lives in a colony that consists of between 400 to 700 workers.

Everyone lives together in a large nest built from paper, and workers are very aggressive when it comes to defending their nest. That is when they use their smooth stingers to sting the invaders, repeatedly. These insects are very aggressive, and the venom in their stingers causes very sharp pain, inflammation, redness, intense itching, and burning sensation. Seek medical care immediately, especially for those who received multiple stings.

The name of the bullet ants receives from the amount of pain compared to that of being shot by a gun. The wound from the sting of the bullet ant is relatively small, but the pain lasts for hours. Native to the western part of the rainforest of South America, bullet ants are the largest ants in the world. With just one sting from the bullet ant, you will feel the pain throughout your whole body. The victim starts shaking and sweating, their heart rate starts to go up, and some might pass out.

As for men from the Satere-Mawe tribe, experiencing the pain from bullet ants is part of their passage ritual rite. To earn manhood and social status, young men must place their hands in a giant woven glove filled with hundreds of bullet ants. If any boys want to become a man, they must experience the worst pain that the jungle offers. The young boys must keep gloves on their hands for a full five minutes as the ants repeatedly sting them. The pain is extremely excruciating, and you can have a try at the tribe if you want to.

Being one of the aggressive species of ants, the red harvester ant does not play when it comes to stinging. Despite the fact that they look like fire ants, they are not related and their stings are many times more painful. The red harvester ants live in colonies, and they build nests underground. Everyone in the colony will attack any animals if they feel threatened, and the attack is painful. This ant species has one of the most painful and long-lasting stings in the ant world. The stings can leave you with a swelling wound that oozes for hours, and that is not nice. Schmidt gave the sting from this ant a three out of four, he described the pain as bold and unrelenting.

Here you are looking at the largest bee in the world, with a fluffy black body and purple wings. Looking good and all, this cutie is among the insects that deliver painful stings. The nice thing about them is that they always mind their own business, carpenter bees never look for trouble. The males are incapable of stinging while the females are, yet rarely do unless threatened. However, when they do decide to sting, the pain is described as electrifying, sharp, and piercing. The carpenter bees are widely dispersed throughout Southeast Asia, and they inhabit forests in warm tropical climates.

It is all about teamwork and friendship when it comes to stinging from the red paper wasps. Upset or mess around with one of them, the others in the colony will look for you, find you, and sting you. You might wonder what they call their friends. Easy. The dramatic wasp that you wafted will release pheromones to alarm the other members of the colony. That is when you see more wasps coming to greet you.

Their stings are extremely painful, and they can be allergic to some people. The common symptoms from the stings include intense pain, itching, swelling, allergic reactions, and redness. The wasps can sting multiple times, and they can cause very serious health problems. Even worse, death. Schmidt said the pain from the sting is caustic and burning, with a distinctly bitter aftertaste.

With a rate of four out of four for pain, tarantula hawks have the worst pain among other insects. This insect has the ability to paralyze and eat tarantulas, and that is how it got its name. The combination of a long stinger and the venom that can stunt the prey makes the tarantula hawks very dangerous. The pain from their sting is unbearable, and the excruciating pain will last a few minutes. During those minutes, the pain can lead to weakness and fainting as the pain keeps getting worse and worse. Those who have experienced the sting described the pain as immediate, excruciating, and unrelenting pain that shuts down the ability to do anything. Once stung, the only thing that the person can do is scream. With all the pain and reaction, the sting is not dangerous and it does not require medical attention at all.

Also known as Cow Killers, velvet ants are actually wasps not ants in spite of their appearance and name. Velvet ant is a parasitoid wasp species in which the females are wingless but are capable of giving an extremely painful sting. The velvet ants are very quick, and they often take a defensive posture when threatened. Apart from having painful stings, velvet ants are also very callous. They seek out the brood cells of eastern cicada killers to deposit the egg onto host lava. The egg then quickly hatches into a white legless grub that consumes the host during the growing-up process. Though the velvet ants tend to avoid humans, it is also best for us to stay away from them.

Just look at the name you can tell that the warrior wasp is not the insect to mess around with. The ferocious appearance and coloration already give away the warning, let alone knowing about what they can do. These wasps have massive jaws, and their stinger delivers sharp and shooting pain followed by swelling. With painful stings just like those from the tarantula hawks, warrior wasp’s sting is also four out of four. The only good thing about their sting is that it does not last for hours like the stings from some insects. To be safe, always seek for medical attention if you are stung by one of the warrior wasps.

The fearsome thing about these insects is that they do not only sting but also bite, and that is scary. The Western yellow jackets usually build large nests from wood fibers, enclosed in a hexagonal paper envelope. You can find them in North America, and they feed on flies, moths, grasshoppers, cockroaches, cicadas, grubs, bees, spiders, etc. The chilling part is that they have known to eat flesh from the open wounds of animals.

As for the sting, they have an intense venom that lasts for two minutes and leaves a small inflamed red mark. They tend to not sting unless a violent struggle occurs, and they sting repeatedly which is very painful. On top of that, the yellow jackets will attack together if you disturb their colony. The group attack can result in intense pain and severe health conditions that include difficulty in breathing, swelling, slurred speech, and more.