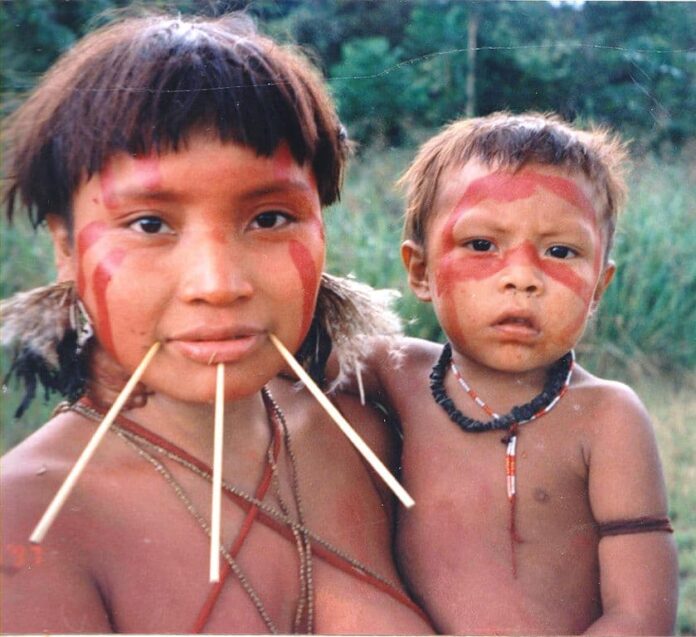 Most of the dangerous tribes are also known as the uncontacted peoples due to their self-isolation. Because they prefer not to communicate with others, they are also very protective of their lands. This is why they would attack the outsiders, and there is no way anyone could change their minds. There are over 100 uncontacted indigenous peoples in the world, but we are talking about 5 most dangerous tribes today.

The cacataibo (Cashibo) tribe has been around since the 17th century, and they are one of the indigenous people in Peru. This tribe has 3 subgroups including the Cashinon, Kakataibo, and Runo. All of them live in 5 villages, and they speak Cashibo-Cacataibo language which is a Western Panoan language. Back in the mid-17th century, the tribe killed one of the missionaries who reached out to them. The tribe remained uncontacted since then until the 20th century.

While most uncontacted tribes avoid communication with neighboring tribes, this one doesn’t. This was one of the reasons why they were raided and attacked by other tribes. In 1930, a leader who was a kidnapped member raised by another tribe persuaded the tribe to change their ways. Upon rapid acculturation, the tribe faced a lot of problems. As for now, illegal loggings and minings are the main threats to their land and them.

The Matses remained out of communication until 1969 when they made their first permanent contact with SIL missionaries. Also known as the Mayoruna, this ancient Amazonian tribe is famous for the distinctive appearance of their women. Every woman in the tribe has facial tattoos and thin palm leaf fibers whiskers known as “demuzh” inserted into their nose. Some of them have whiskers from 6 to 10 on each side of the face, and this is considered beautiful.

Despite the fact that the tribe has made contact with the outside world, cannibalism is what made people think that they are dangerous. The thing is that it is part of their rituals and traditions, there is nothing to do with hunting and eating people. Family members would eat parts of their deceased relatives to absorb the spirits of their ancestors. As for now, the tribe is believed to no longer practice cannibalism.

When it comes to the most isolated and most dangerous tribes, the Sentinelese always comes up on the list. That is understandable because the members of the tribe would attack anyone who would try to set foot on their island. The tribe refuses any contact with the missionaries, and they don’t hesitate to kill those who attempt the communication. As hunter-gatherers, the tribe uses bows and arrows to hunt and defend themselves from outsiders.

The only contact allowed by the tribe was in 1991 after multiple visit attempts since 1967. T N Pandit, an anthropologist, would bring items with him as gifts for the tribe on each visit. He would float those items, and the tribe members would choose what to keep and leave behind. During those visits, he never went any close to the island because the fully armed warriors would threaten everyone away.

Things changed in 1991 when the tribe came out and approach his team in the ocean. He even photographed a picture of himself handing a coconut to one of the members. Even so, he was not allowed to step onto the island. The tribe has lived peacefully since then until 2019 when the news of them killing an American missionary came out. The adventure blogger illegally visited the island with the hope of converting the tribe to Christianity.

The Waodani or Huaorani is one of the dangerous tribes but in a different way. With poisoned blowguns and spears in their hands, the members of this tribe are ready to strike. Lately, there have been a number of invaders who want to take their lands for commercial purposes. There are around 2,000 people in the tribe, and these nomadic hunter-gatherers have been maintaining their lands for years. The missionaries first contacted them in the 1950s, and that did not go well since the tribesmen speared them to death. Today, the tribe no longer attacks people but they will raise their spears once again if anyone wishes to steal their lands.

With over 35,000 members, the Yanomami is the largest isolated tribe in South America. The village of this tribe lives in large, circular, communal houses that can host up to 400 people. Unlike other tribes, the Yanomami strongly believes in equality among people. There is no chief, and the decisions are made by consensus so that everyone can express their opinions. However, they do have roles based on their sex. Men are hunters while women are gatherers and crop growers.

There are around 250 villages in the Amazon rainforests and mountains of northern Brazil and southern Venezuela. This tribe came into sustained contact in the 1940s, and two villages were wiped out. It lost many members due to the flu to which they had no immunity. The gold miners also play the part in transmitting deadly diseases like malaria and measles along with water pollution.

Rather than practicing the cultures of the missionaries, this tribe prefers to abide by their own. Cannibalism is one of that, and it is practiced in the form called Endocannibalism. This act is the practice of eating the flesh of a dead person from the same community or tribe. The tribe believes that the soul needs protection after the body dies, and endocannibalism is the answer. They believe that the soul can make its transition only when the body has been burned and eaten by the relative.

Related Post: Bizarre Rituals From Tribes Around The World