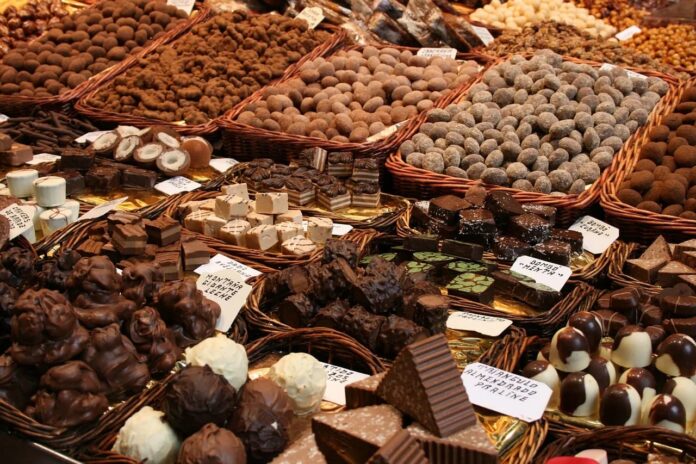 Many of us LOVE chocolate, and today we will explore the 7 biggest chocolate factories in the world together. Do you know how chocolate is made? Or where does your favorite chocolate come from? Nowadays, there are 4 countries that produce the most chocolate including the United States, Germany, Switzerland, and Belgium. Cacao seeds are the main source to produce chocolate through many processes to get chocolate bars that we eat. But first, let’s talk about the biggest chocolatiers.

Being a member among the world’s largest cocoa producers and grinders, the company produces 1.7 million tonnes of cocoa every day. Founded by Callebaut in 1996, the company now operates in more than 30 countries around the world. At the same time, this company is also one of the world’s leading manufacturers of high-quality chocolate and cocoa products. Its headquarter locates in Zürich, Switzerland.

Hershey’s is the largest chocolate factory in the world, and their products are in over 60 countries in the world. Apart from chocolate, Hershey’s also manufactures other products like cakes, cookies, and more. Their headquarters are in Hershey, Pennsylvania. The chocolate factory was founded by Milton S. Hershey back in 1894. This factory is a member of the World Cocoa Foundation now, I hope you like Hershey’s chocolate.

Michele Ferraro was the founder of this company back in 1946 after many years of chocolate inventions by his father and uncle. Personally, Ferrero Rocher is my favorite chocolate due to the tastes and designs of the chocolate. The headquarter of the company is in Alba, Piedmont, Italy. Besides chocolate, the company is also the owner of Nutella, Raffaello, Tic Tac, Kinder Surprise/Chocolate/Bueno/Joy, and more.

Founded in Belgium back in 1926 by Joseph Draps, the company later was purchased by a Turkish businessman, Yildiz Holding. The chocolate from the company is in the stores worldwide along with other productions like ice cream, cheesecake, coffee pods, and more. Now, there are more than 450 Godiva shops worldwide.

This factory makes more than 100 different chocolates from original recipes for more than 70 years now. Teuscher locates in Zurich Switzerland, and the company has outlets in Geneva Berlin, NYC, Boston, Beverly Hills, Tokyo, and more. Founded in 1932 by Dolf Teuscher, Sr., the company also bakes the famous cookies of Basel as well.

We also have a big chocolate factory in France, too. Founded in 1922 by Alberic Guironnet, it is one of the leading producers of gastronomic chocolate in the world. Their headquarter is in Tain-l’Hermitahe, France. There, you will find countless chocolate bars and bulk or pellets flavored in different tastes that you will love. No doubt why this is among the best biggest chocolate factories in the world.

Here is the Chicago-based luxury chocolate maker founded in 1998. Interestingly, the special chocolate that they offer features a combination of exotic varieties of spices, bacon, and other ingredients. The owner of this factory is Katrina Markoff, and the factory produces chocolate with many unique ingredients with perfection.

7 Fruits We Think Are Vegetables But Are Actually Not