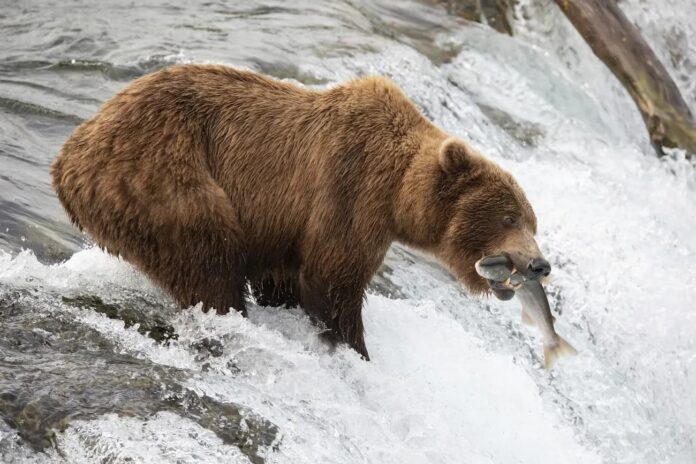 There are many bear species that live in every continent in the world, but we will focus on the biggest bears today. To be more specific, this list will show you the biggest carnivorous bears that are in the world with us. Some bear species like Pandas are herbivores, and we all know them. However, there are many more biggest bears that are so strong and large out there in the forest. You can find all the bears in our article in mountains, riverside, and forested regions around the world except one species. To find out what the biggest bears are, feel free to look into our list below and let us know which one is your most favorite.

It is the smallest of the three bear species in North America, and you can find them in forested habitats. The population of American Black Bear is between 396,000 and 476,000 based on an old survey in the past decade. This type of bear has a special ability to climb trees, and they often mark trees using their teeth and claws. The marking is a form of communication with other bears which is also a common behavior of many bear species.

Their breeding period usually occurs in June or July, and sometimes extends to August for northern range species. The litter is usually born in late January to early February, and the litter consists of 1 to 6 cubs. The cubs open their eyes after 28 to 40 days, and they begin to walk after 5 weeks. Cubs are dependent on their mother’s milk for 30 weeks before reaching independence after 16-18 months.

A black bear has better eyesight and a better sense of hearing compared to humans, and their keenest sense is the sense of smell. At the same time, they are also excellent and strong swimmers which is the activity they do for pleasure and feed. Black bears use their tree-climbing ability to feed, escape from enemies, and even hibernate. During their time of fear or nervousness, they may moan, huff or blow air. They also produce warning sounds by jaw-clicking and lip-popping to scare the predators away.

An adult bear is capable of killing a human, but black bears usually avoid confronting humans when possible. Even when confronting humans, black bears rarely attack; and they usually limit themselves by making mock charges. They do so by emitting blowing noises and swatting the ground with their paws. Still, the number of black bear attacks on humans is higher than those of brown bears due to their aggressiveness.

Sloth bears are small to medium in size species of bear that you can find in the Indian subcontinent. They usually live in the lowland forests of India, Nepal, Sri Lanka, Bhutan, and Bangladesh. Sloth bears can live in a variety of habits including thorn scrub, grasslands, and dense forests. Their population is between 10,000 and 25,000 remain, but the population decreases due to poaching and habitat loss.

Here we have another member of the world’s biggest bears that goes by another name of North American Brown Bear. Grizzly means gruesome, and that explains a lot of things about this species of bear. These are huge bears that can stand up to 2.4 meters or more on their hind legs. You can recognize a grizzly bear by the hump on its back that is made of pure muscles.

Male grizzly bears prefer to live alone, but you can also see them in large groups during a migratory season of salmon. The bears will enter the shallow water and catch the fish when they jump out of the water. They can eat up to 25 fish per day or more when they are preparing for hibernation. The purpose is to gain as much weight as possible because hibernation lasts between 5 and 8 months.

Grizzly bears are also excellent swimmers and fast runners, and they can run up to 30 miles per hour. Plus, they have perfect eyesight and an excellent sense of smell which is even better than hound dogs. Grizzly bears are more aggressive compared to black bears when defending themselves and their offspring. When in danger, they respond by standing their ground and warding off their attacks.

Cubs of grizzly bears stay with their mother for about 2 to 4 years, and they can climb trees at a young age. After a few years, this climbing ability will lose as their long claws start to grow out of their paws. Bear’s claws are long just like a human’s fingers, except they are sharp and can slash throats. Mother grizzly bears are very protective of their young cubs, and she will not hesitate to kill if you come close to her cubs.

As a matter of fact, grizzly bears are responsible for 70% of humans’ death when in defensive mode. Grizzly bears are dangerous not only because of their running speed and sharp claws but also the force of their bite. It has been estimated that a bite from a grizzly bear could even crush a bowling bowl. Definitely something no human wants to experience.

This species is the largest bear in Eurasia, and it is the third biggest bear in the world. The bear can stand up to 3 meters tall on its hind legs, and you can tell that these bears are huge. Their large physical size is a result of their access to rich food sources like salmon, pine nuts, and berries. Maintaining body weight is crucial to survive the long period that bears spend sleeping in their winter dens which is up to 6 months.

The females of this species can begin to reproduce as early as 4 years of age with litters of a few cubs. Research has shown that some female bears with cubs do not approach salmon streams, to avoid risking their cubs being killed by another bear. Their main food sources are salmon, dead sea mammals, and even whales. That is because their habitats are along coastal areas like on islands which is favorable for seafood.

Kamchatka Brown Bears are generally not dangerous to humans, very low percentage of attacks that humans encounter. Such almost-docile behavior makes them among the most prized trophies for the Russian hunting industry. The current population of these bears is not between 10,000 – 14,000, and development is also part of their population decrease.

Kodiak bear is a unique subspecies of grizzly bear, and there are about 3,500 of them alive today. Kodiak bear is the largest subspecies of brown bear as well as one of the biggest bears in the world. These bears enjoy relatively pristine habitats and managed fish populations. Male bears of this species are called boars while the females are sows, and the youngsters are cubs. The male can stand over 2.5 meters tall on their hind legs, and about 1.40 meters all on four.

Cubs of Kodiak bears are born in the den during January or February, and they stay with their mothers for 3 years. The sad thing is over 25% of the cubs die before they leave the mother due to cannibalism by adult males. For cubs who left their mothers at ages 3 to 5 also have a high mortality rate as they face the world.

Kodiak bears are one of the carnivorous bears but somehow they are also omnivores since they use a variety of food. At some point, you will also find them eating grass, plants, and berries if the areas are not rich in fish. Only a few Kodiak bears expend the time or effort to chase and kill mammals, but fish is their important diet.

People usually hunt Kodiak bears for their fur or meat, and that is one of the reasons for their population decrease. Today, hunters kill about 180 Kodiak bears each year under tightly controlled regulations. On the other hand, only one person has been killed by a Kodiak bear in the past 75 years. Just so you know, that one person was the hunter who was on the Kodiak bear hunting game. Also, only once every other year that a bear injures a person. Usually, Kodiak bears attempt to avoid encounters with people and they only attack when surprised or threatened.

Polar bears are the largest land predators as well as the biggest bears in the world today. You can only find them in cold areas like the Arctic and some cold regions in some parts of earth. There are between 25,000 and 40,000 polar bears today, and the concern is the population will decrease due to global warming. That causes the loss of their habitats as well as the loss of their food sources which we can see even nowadays.

Polar bears have special body characteristics that allow them to adapt to cold temperatures and move across snow, ice, and open water. Their fur is thicker than any other bears’, and the fur covers even their feet for warmth and traction on ice. Most polar bears are born on land, but they spend most of their time on the sea ice hunting, mating, and denning. Also, polar bears are strong swimmers, and they can swim as far as 200 miles from land.

Polar bears are the most carnivorous member of the bear family, and their common hunting method is still-hunting, on seals. They use their excellent sense of smell to locate a seal-breathing hole, and crouch nearby in silence for a seal to appear. This can take up to several hours, and the bear drags the seal out from its hole onto the ice with a forepaw. Polar bears kill the seal by biting its head to crush its skull. Their menu consists of seals, ringed, muskox, reindeer, birds, and other polar bears.

Cubs are born between November and January, and the mother nurses them until they are large enough. Then they emerge from the den in March or April, and the cubs remain with their mothers for about 2 years. A female polar bear can produce 5 litters in their lifetime which is one of the lowest reproductive rates of any mammal.