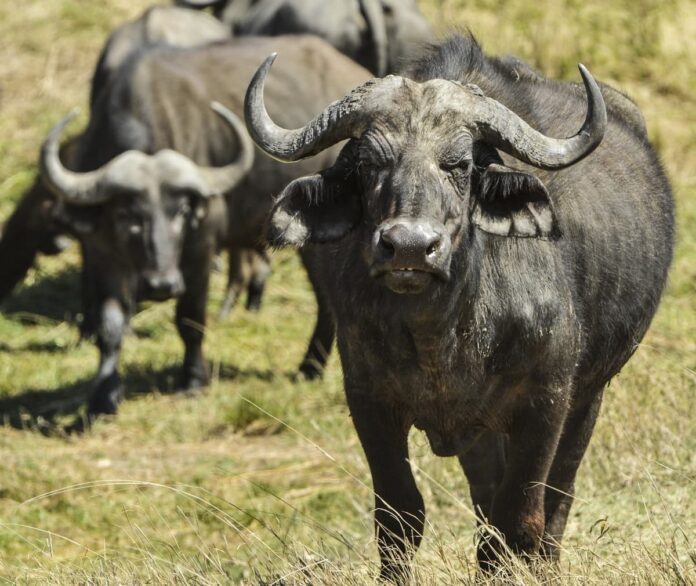 Hunters know so well what the Big Five Game is but many of us don’t, so let’s talk about it today. Coined by white safari hunters, the Big Five describes the 5 most dangerous and challenging animals to hunt on foot in Africa. We all know that there are many dangerous animals out there that share the earth with us. However, there are main 5 animals that are not only dangerous but also difficult for hunters to hunt. That is why the hunters call them the big five because risks come from every angle when hunting these animals. We are all familiar with them, so let’s take a look at the most dangerous animals to hunt with me today.

Being the largest living terrestrial mammal, African Elephant is one of the animals that we all should fear. Despite the fact that they are very calm in nature, these mammals can also be very combative sometimes. African Elephants, especially the older bulls and young males can be aggressive even when not provoked. With this size, they can easily crush and turn you into a deformed pancake by just effortlessly walking on you. Let alone make them angry by shooting them with guns which can lead to them chasing and trampling you. The African Elephants are not the animals to mess with.

On top of that, these African Elephants are more aggressive where poaching is rife or where their habitats are threatened. Most attacks are carried out by bull elephants during their sexual activity period which makes them super aggressive. During this period, elephants carry their head and ears higher than normal and make a characteristic rumbling around. These elephants can be extremely dangerous to anything that gets in their way. Just so you know, elephants are responsible for the deaths of around 500 people every day. Meanwhile, poachers kill approximately 55 African Elephants every day.

These large carnivore felines are also among the big five animals that are difficult to hunt as well. As a matter of fact, these big cats are the most difficult of the big five to hunt due to their speed and nature. African Leopards are nocturnal and secretive, and they are wary of humans which means they are not afraid to slap danger in the face. Plus with their great speed, hearing, and sense of smell, African Leopards are one challenging animals to hunt.

The most challenging part is that hunters have to hunt them at night, and hunting them with light is illegal. That makes these felines even more difficult to hunt and catch in the dark. At the same time, African Leopards are also the most difficult animals to acquire hunting licenses for as well. They are fierce, fast, aggressive, and strong, so hunting these large cats is not an easy task to do.

The African Rhinoceros or Black Rhinoceros is not only among the big five game but also among the most dangerous herbivores. In contrast to their diet, these animals are very aggressive and dangerous to other living animals and humans. They won’t eat us, but they are not afraid to chase and injure us if we provoke or harm them. The size and speed of a rhino make it one of the most dangerous animals to hunt.

However, their population keeps on decreasing due to poaching and overhunting from year to year by poachers. When threatened, they will charge at full force which can easily lead to death in a blink of an eye. These large animals will also use their horns to kill or injure what they deem to be a threat. We cannot blame their aggressiveness on the fact that poachers continue to hunt down their family members every day.

FYI: Never get in between a mother and her baby or anywhere near an older male, they are extra aggressive.

I always call these bovids the animals with bad hairdos, but their level of dangerousness is ridiculously high. Cape buffalos can kill lions, so you can try imagining what they can do to us small and helpless humans. These buffalos have killed more big game hunters than any other animal in Africa. Do you know why? Because they become more aggressive when they are hurt or wounded. If the bullets didn’t kill them and the hunters didn’t run fast enough, it will be the buffalo’s turn to finish the game. These bad hairdo animals have killed around 200 people every year by charging and then goring their victims.

On top of that, they usually appear in very large herds which is both intimidating and dangerous at the same time. Even when looking at them through binoculars from a distance, it always appears that they stare back at you. Since the average shooting distance on a Cape Buffalo is between 20 and 60 yards, the hunters always get ready to run. An angry buffalo will circle back on their victims before they trample them to death or use its bone horns to gore them. Even the king of the jungles avoids hunting them at some point, so we should know why these buffalos are dangerous.

Lions are the kings of the jungle, it is obvious with the fact that they are not easy to hunt. These big cats are one of the most challenging and dangerous animals to hunt in Africa. One mistake, and the hunters will end up becoming their lunch within seconds. Lions have exceptional night vision, shrewd intelligence, fearlessness, speed, and agility that make them one fierce man-eaters in the wild. To hunters, lions are incredibly challenging to catch especially in the dark. When nightfall comes, there is always a 50/50 chance for both sides of being hunted. Male lions, even the sick ones, are responsible for hundreds of human deaths each year. All they need is one bite to finish us, so that is not a surprise that these big cats are among the big five.

Related Post: Animals That Are Hunted To Extinction By Humans