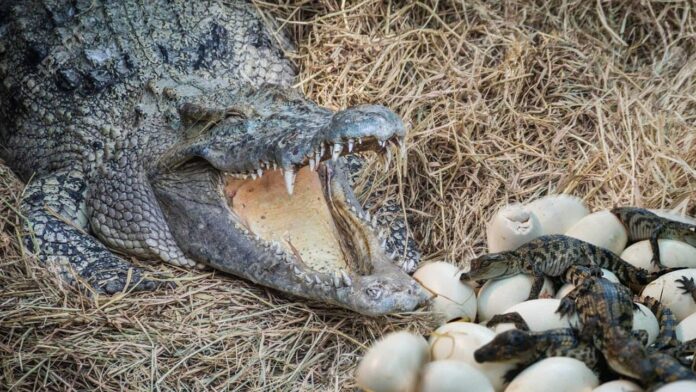 So basically there are two ways that living creatures on earth give birth; laying eggs and giving birth. The thing is that eggs are laid by animals in almost all groups, but the largest ones are what we discuss today. There are not so many animals with the largest eggs out there that we know of, that is why we choose the largest ones in each category.

Our topic today will mainly focus on the largest eggs of animals on land and water. That includes amphibian, bird, fish, mammal, and reptile. Let’s see which animals lay the largest eggs, and let’s find out who they are.

Chinese Giant Salamander is the largest salamander as well as the largest amphibian in the world, and of course, it lays the largest eggs as well. You can find a lot of them in China, but they also exist in some parts of East Asia like Taiwan and Japan as well. A female Chinese giant salamander lays between 400 to 500 eggs in an underwater breeding cavity.

When laid, the eggs are only about 7 to 8 millimeters. However, the size will double when absorbing water. The final egg size is about 3 centimeters which is big for an amphibian. It takes time for the Chinese giant salamander to grow, and that is about 6 years to reach an average length of 40 to 50 centimeters. This amphibian is currently endangered and is under the protection of the Chinese government.

The one and only animal on land that lay the largest egg is of course the flightless bird Ostrich. Ostriches have appeared in our articles many times already, and here they come again. Being the world’s largest birds, Ostriches also lay the largest eggs as well. Ostrich egg is oval, and it has a glossy and porcelain-like shell that is pitted with hundreds of pores.

The average size of an ostrich egg is 13cm x 16cm, and it weighs between 1.1 and 1.9kg. A female ostrich can lay from 40 up to 100 eggs per year mainly from mid-March to mid-August. In Africa, ostriches have been raised for eggs, meat, and feathers for at least 150 years now.

Ostrich eggs are also popular among food lovers as well, and one ostrich egg can provide a meal for 18 people when scrambled. If you want to hard-boiled it, it takes at least one and a half up to two hours to get everything well cooked.

The shell of the ostrich eggs is also used to make artifacts as well since they are strong enough to bear the weight of an adult man. That makes it easy for people to carve, hand painted, and engraved which can value up to $150.

Just like the ostrich, the largest fish egg will also be laid by the largest fish as well. And that goes to Whale Shark aka the world’s largest fish. The interesting thing about whale sharks is that they don’t lay their eggs like other fish at all. The eggs hatch inside the mother’s womb, and the mother gives live birth to her young. Each female whale shark can give birth to up to 300 baby whale sharks at a time, and those little things grow really fast. You might be afraid of the size, but that is okay because whale shark is totally harmless.

The main thing that you can notice about a whale shark is the shade color of blue and gray on the body. Each whale shark has up to 350 rows of teeth which equals to more than 3000 individual teeth. But still, whale sharks are harmless, and those teeth have the size just only about of a match head.

The largest mammal egg belongs to the Western Long-Beaked Echidna, a monotreme with a size of 14 to 30 inches. This mammal feeds on earthworms, and its tongue has spikes that can capture its prey very effectively. Their ways of mating are very fascinating since the male will sometimes come into a female’s burrow and mate while she sleeps.

The female might wake up pregnant without knowing how she became that way, according to National Geographic. So each female usually lays only one egg at a time, and it hatches after a week or more. When hatches, a puggle which is the name for baby Echidna, is about an inch. So the size of the egg is also similar to that as well. Echidna is highly endangered at the moment, and it is being protected since the spiny creature is also a delicacy in Papua New Guinea.

Dinosaurs used to be the reptile to lay the largest eggs in their groups, but since they’re gone, so the title goes to someone else instead. The largest reptile eggs belong to the dinosaur’s cousin, Saltwater Crocodile aka the largest reptile alive. A crocodile can lay between 40 to 90 eggs during one birthing, and those eggs are pretty big.

Each egg has a measurement with an average of 8 by 5 centimeters with a weight of 113 grams. It does not sound so big, but it is huge compared to the size of other reptiles in the world nowadays.