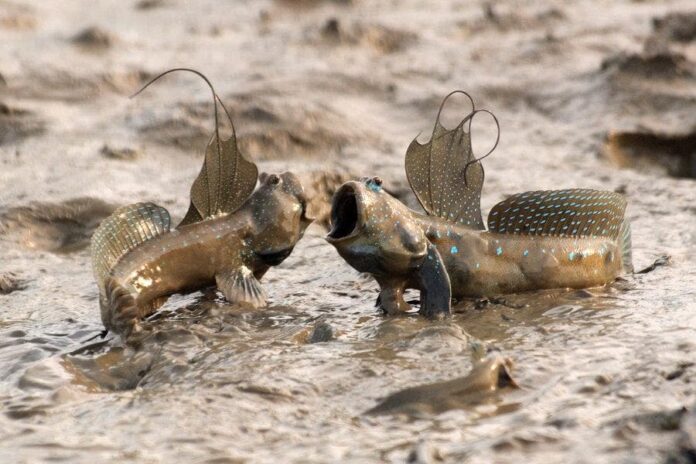 Many things are possible when it comes to nature, even fish can breathe air at some point. Yes, we are talking about some unique fish that can breathe out of the water which is known as amphibian fish. Some fish can breathe and live out of water for a short period of time while others go for days.

We know that fish uses their gills to take oxygen from water, but some adaptations allow them to breathe air. Such uniqueness allows them to find food and survive better since they live in both worlds. We have some interesting fish that can breathe out of water in the list below, don’t forget to share your thoughts.

Looks just like regular fish but with extra ability, climbing perch is one of the fish that can breathe out of water. As a matter of fact, this invasive species can live without water for up to six days without a problem. Climbing perches have an accessory air-breathing organ that allows them to survive outside of water. During drought, they are known to bury themselves in the mud to survive longer. Those spines that you see are probably the things you thought prevented the fish from walking. Actually, they use those strong spines on their pectoral fins to walk on land. Weird but true, nature always has new things that surprise us.

Here we have a fish species that live in the muddy swamps of the tropics of Central Africa. The species is well-known for their ability to propel itself out of the water to catch prey. This fish has a special suprabranchial organ that is formed by tree-like structures from the second and fourth-gill arches. That allows the fish to take in oxygen directly from the air, and they can stay on land as long as they are moist. On top of that, they can hunt both in and out of the water with different hunting methods. In water, they suck water and food into its mouth which is simple just like what most fish do. When on land, they lift the front of their body up before bending their mouth down on the prey.

Being one of the fish that can breathe out of water is one thing, but being the fish with more than two eyes is another thing. The name already says this fish species has four eyes. Two eyes are above the water while the other two are below the water’s surface. Each pair works together to provide vision both in and out of the water. They spend most of their time at the surface of the water, and they are able to survive outside of water. Four-eyed fish can expose to air and is still able to breathe, and that helps them to survive especially during low tide.

This species of fish lives in brackish and marine waters along the coasts, and they can live up to months on land. Yes, two months or 66 days to be exact. When jumping on land, the fish does a tail flip by flipping its head over its body towards the tail end. This unique jump allows the fish to direct its jump on land and to make relatively forceful jumps.

They have specialized skin that takes on many of the roles of gills which gives them the ability to breathe on land. When on land, this type of fish deploys a number of physiological changes that promote aerial respiration, osmoregulation, and ion regulation. It alters its gills so that it can retain water and nutrients while nitrogen waste is excreted through the skin. This cycle will change once the fish goes back into the water.

Here we have another amphibian fish that have the ability to live both in water and on land. Mudskipper is a fish with an unusual look as well as strange abilities that not every fish has. Apart from being able to live happily on land, this fish can also climb trees and low branches as well. So next time when someone says you are allowed to do something when a fish can climb trees, introduce them to mudskipper.

Just like the name suggests, this fish does skip on land especially across muddy surfaces as the way to move. With their strong fin, mudskippers can also leap distances up to two feet as well. When on land, these fish can still breathe since they use water that is trapped inside their large gill chambers. At the same time, they can also absorb oxygen from the lining of their mouth and throat as well. That allows them to stay out of water for a long period of time, and they do come on land a lot.

Having a weird name does not stop this unique fish from having many unbelievable abilities. The fish is known so well for their ability to withstand a variety of environmental conditions. First, they can survive high temperature and is able to tolerate rapid temperature changes from high to low as well. At the same time, they are among the fish species that are most tolerant of salinity changes as well. The best part is their ability to breathe on land which is not something every fish can do. They can survive for hours in moist air outside of water by breathing air directly.

Apart from mudskipper, there is also another skipping species of fish that can breathe out of the water as well. Rockskipper aka Coral Blenny is the type of fish that is known for its habit of skipping between limestone pools. They usually come on land to feed on algae from dead corals and to mate. The interesting thing about this fish is that it can survive for hours outside water as long as it remains moist. Plus, they are also able to forage and mate while on land as well. Why water when they can spend their honeymoon on land, right?

This is one strong and fierce fish with a gruesome reputation when it comes to its aggressiveness. Snakeheads breathe air with their gills, and that allows them to migrate short distances over land easily. More than that, they can survive on land for up to four days or even more as long as they are wet. Not to mention that they are known to have attacked and killed people, this is one fish species to know and avoid.

This is not only the fish that can breathe air but also the fish that can withstand drastic temperature changes. They usually leave water from time to time, and they can survive on land for up to 24 hours. Also, they can survive rapid temperature fluctuations as well as rapid changes in salinity which is simply incredible. Woolly Sculpins are ambush and active predators that lie in and wait to attack their prey both in and out of water. This type of fish usually comes on land to hunt, mate, and look for new homes if oxygen levels get too low in the water.